The AGRA greyhound rankings have been released up until March 2011 and on-again / off-again stud dog High Earner has been ranked the number 1 dog in the country.

High Earner has been ranked with 188 points by the AGRA, largely courtesy of his Group 1 Perth Cup win, and invitation-only Group 1 Temlee win.

And despite being officially re-retired to stud with studmaster Paul Westerveld immediately after the finishing second in the Group 1 Australian Cup final, High Earner has been returned to Kelvyn Greenough’s kennels to contest the heats of this weekend’s Group 1 Golden Easter Egg heats.

Tuaiki, by Premier Fantasy is ranked in 17th position on 40 points as a result of his Group 2 Gosford Gold Cup win.

Finbar McCool, also by Premier Fantasy is ranked back in 23rd position on 35 points largely due to his Cranbourne Cup second placing.

And the old adage of short term pain for long term gain by using outcross import sires in greyhound breeding, might be in danger of dying off.

Just 4 of the top 25 greyhounds being by imported greyhound sires through the dams sire.

Crystin Bale (9th) is the highest ranked greyhound with an import dam-sire being out of Sorrento Bale by US sire Bomb Threat.

Bobby Boucheau (10th) is out of Dallas Gypsy by US sire EJ’s Douglas, while Dashing Corsair (16th) is out of Rose Flamenco by Irish sire Southern Champ; and Stanford Bale (25th) is out of Talia Bale by US sire Fortified Rush. 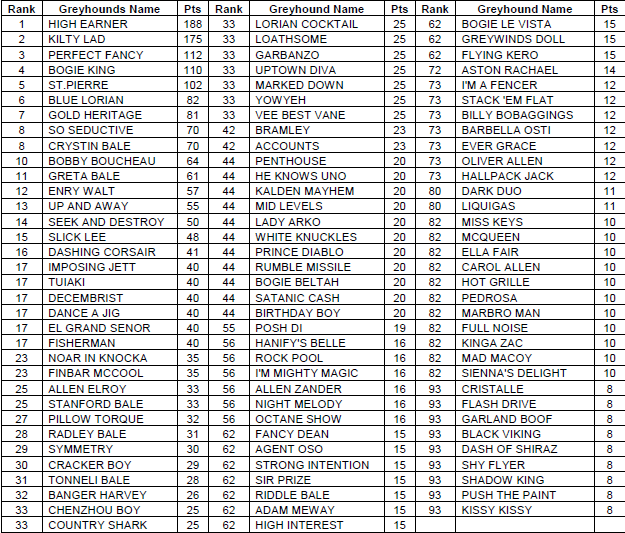