Victorian syndicate manager Hays Bailey is sitting on cloud nine at present, having notched up his first Group One win on Saturday night with brilliant sprinter Lucy Lobster.

Bailey formed a syndicate with his fellow university students and friends, switching from horse racing to try their luck with greyhounds. After purchasing a moderate greyhound, the syndicate got the opportunity to purchase a regally bred chaser from successful breeder Charlie Lamb.

“I got in contact with Charlie (Lamb) and he had some really well bred pups by Brett Lee out of his good bitch One Tree Hill. We now have three other greyhounds we’ve purchased off him (Lamb) and hopefully they turn out as good as Lucy Lobster has,” said Bailey, who understandably was elated after Saturday night’s stunning victory.

“All of us were just hoping she would get through to the semi’s and then the final and it was so exciting to win that race with so many good dogs around her.”

Lucy Lobster stepped beautifully from box five and battled with Jewel Action for the lead, prevailing by half a length at the finish in a speedy time of 29.85.

“Every single week she jumps well and puts in so much effort. In the back straight when Jewel Action hit the front I thought maybe our chance to win was over.”

“To see her kick back at the finish was awesome and the whole syndicate celebrated at our favourite place; the Golden Century seafood restaurant in Chinatown.”

Fittingly her peculiar race name didn’t come from the syndicate’s traditional post race trip to a seafood restaurant in Sydney, but was the combined efforts of two owners.

“Me and one of the other owners were quite intoxicated and came up with her name in Sha Tin. I’m not sure where Lucy came from, however it just seemed to work with Lobster. We have a lot of similar names that we will use for our other dogs coming through.”

Saturday night not only provided the syndicate with their first ever group victory, but also their first city winner, a feat which has been a dream of Bailey’s for quite some time.

“I grew up going to the TAB in Melbourne and all I’ve ever wanted is a dog that could break 30-seconds at a metropolitan track.”

“I had so many people come up to me after the race offering their congratulations and that was really nice.”

The aptly named ‘Sweet Lady Punt’ syndicate will now turn their attention to Sandown Park, with Lucy set to take on some of the best greyhounds in Australia in the Group One Melbourne Cup. Astute Victorian trainer Robert Britton will put the polish on this talented chaser, who will be looking to secure her fifth straight win and tenth of her career.

“I will go and watch her trial at Sandown and hopefully she goes well. An inside box in this race would be nice, but she has such good early speed and hopefully can produce that in Victoria.”

“We will target the Laurels after this and possibly the Gosford Gold Cup and National Futurity. It’s really good we have so many race options for bitches only.” 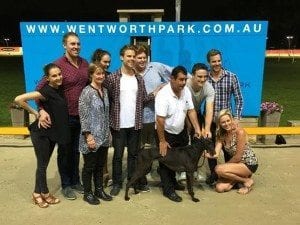