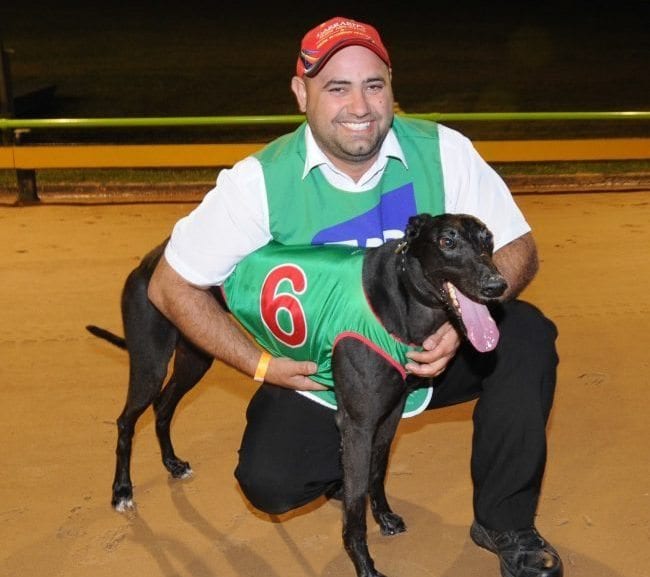 Can Zambora Brockie win the Melbourne Cup?
ALL eyes will be on Sandown Park this Friday night for the running of the world’s richest greyhound race, the Group 1 Melbourne Cup (515m).

Worth a massive $420,000 to the winner, the race has been won by some of the greatest canines the sport has seen, with less than 30 seconds separating one dog and greyhound racing immortality.

The favourite heading into this year’s decider is champion greyhound Zambora Brockie at $2.20 with William Hill.

Trained by Anthony Azzopardi, the black dog won his heat of the series in a flying 29.06 last week and will jump from box three in the decider.

Despite being the class runner of the field with five group wins under his belt, Friday’s race will be no walk in the park for Zambora Brockie.

Also in contention for the title is Outside Pass (box six) which will be joined in the final by fellow Queenslander Tripum (box four).

Both chasers are in excellent form, with Outside Pass the second favourite with bookmakers following her stunning 29.13 heat victory last week.

New South Wales will be represented by Group 1 Vic Peters hero Ando’s Mac (box five) which is sure to improve off his 29.64 qualifying triumph, whilst South Australian also have a finalist courtesy of Cameron Butcher’s brindle powerhouse, Worm Burner.

A winner of the Group 1 National Sprint Championship at Angle Park where he defeated Zambora Brockie, the son of Oaks Road and Little Looper will jump from box two on Friday night.

After a disappointing fourth in the Group 2 Shootout earlier this month, Worm Burner bounced back to form last week with a sizzling 29.30 heat win.

It was his first victory outside of South Australia and a pleasing effort for his trainer.

“He’s finally won a race in Melbourne so the monkey is off our backs,” Butcher told Greyhound Racing Victoria.

“I was tossing up whether to even enter him in the Melbourne Cup heats because I thought he was dismal in the Shootout.

“He went poor in the Shootout from a wide draw after a lot of people thought he was suited out there. He has drawn box two tomorrow night, and if he can get around the first bend near the front, he’s in with a chance.

“He’s got such a big following back at home. Every punter in South Australia knows him and they will all be cheering for him in the Cup.”

Barton Bale will be aiming to give leviathan owner-breeder Paul Wheeler his third consecutive win in the Cup, having won the race with Dyna Villa (2014) and Dyna Double One (2015) in recent years.

The black dog will start wearing the red stretch vest and is sure to put himself in the final as he is armed with dazzling early speed.

Jesaulenko, a dual track record breaker, will exit box eight, a draw which was pleasing to his trainer Terri Morris when speaking to Australian Racing Greyhound earlier this week.

“He has been boxing beautifully so it didn’t really worry me what box he got,” Morris said.

Rouding out the field is Matt Machine for Jamie Ennis. The son of American sire SH Avatar and Love To Rock was impressive in winning his heat in 29.39 last week, but looks poorly boxed out wide on the track this Friday.

The Group 1 Melbourne Cup is race eight on the card this Thursday and is set to jump at 9:08pm.

Best odds to win the Melbourne Cup: $13 with Luxbet

Best odds to win the Melbourne Cup: $2.20 with William Hill

Best odds to win the Melbourne Cup: $13 with Sportsbet

Best odds to win the Melbourne Cup: $6 with Bet365

Best odds to win the Melbourne Cup: $51 with Sportsbet

Best odds to win the Melbourne Cup: $7 with Crownbet