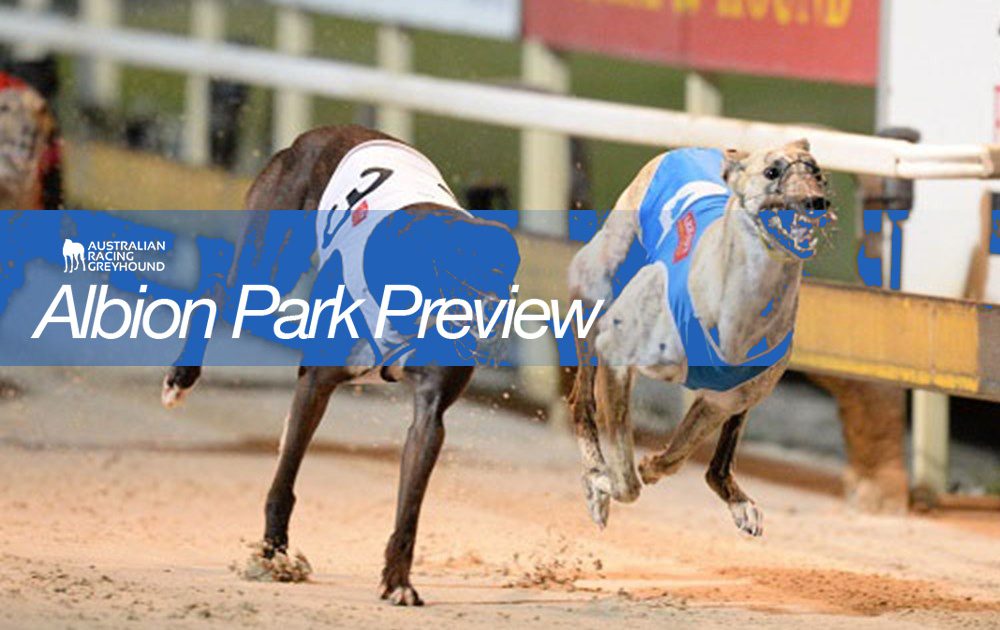 We have another huge 12-race program this Thursday night as the Queensland Winter Carnival continues. The highlight races are the Super Sprinters Group 3 final over the 520m distance, the Super Stayers Invitation over the 720m distance, along with the finals of the Lightning and the Thunder. Here are our expert comments and betting tips for every race.

A good novice race to start this great night of greyhound racing at the creek. The Jedda Cutlack-trained Scintillate (box 7) was luckless last Thursday night when finishing fourth behind Dr. Libby from box four, when making her Albion Park debut. She won her only other career start at Ipswich in good time from box seven. Should improve again and looks the greyhound to beat. The Claude Dacey-trained Daysea’s Rowdy (box 5) looks the main danger. This son of the great Sennachie has been impressive in both of his career starts so far. He has shown good early speed and could cross the field early and lead. The Peter Sullivan-trained Side Kick (box 8) finished second behind Dr. Libby last Thursday night from box one. He has preformed well from wide draws and could get a good run down the outside early. The Tony Zammit-trained Hurricane’s Fury (box 4) is awkwardly drawn but looks a place chance.

This looks a good race for the Warren Nicholls trained Days Of Thunder (box 1). This daughter of the great Fernando Bale loves a small field and will be very hard to beat. She normally drops out early in her races but powers home well when given clear galloping room. She steamed home late to just be beaten by Oh Oh Range in a small field of five greyhounds last Thursday night from box one, clocking 41.72 seconds. A repeat of that run will be winning this race. The Sarah Hunt-trained Fantastic Radley (box 2) finished fourth to Oh Oh Range when making her Albion Park debut. He should improve from that run and can show good early speed in his races. He looks the obvious danger. Magic Miss (box 8) and Me And You (box 6) look good place chances.

Every greyhound entered in this race has a winning chance if they get some luck. The Cyndie Elson-trained Hopeful Hope (box 6) might be able to cross this field early and lead all the way. She can begin well and should be helped with a vacant box directly inside of her. The Jedda Cutlack-trained Showdown (box 4) can also show early speed and has a noted slow beginner drawn inside of her. The Jason Thompson-trained Decimate (box 7) was a better run last Thursday night. He is better drawn and should improve again tonight. The Selena Zammit-trained See Them Try (box 3) is a slow beginner but can finish off his races well. He will need early luck if he was to win but looks a good place chance.

A good field assembled in the Lightning final over the sprint distance of 331m. The inside drawn greyhounds may hold the key to this race. The Daryl McGarth-trained Murphy’s Mate (box 1) has the advantage of drawing the coveted box one in this final. In his heat, he was checked when vying for the lead and finished a close third behind Bogie Bandit from box two. He has won three races from five starts when wearing the red rug and placed in the other two. He has good early speed to hold them out early and can win. Top trainer Tony Brett has Bogie Bandit (box 2) in this final. He was the fastest heat winner, clocking a quick 18.91 seconds from box three. He must be included in the winning chances. The Travis Elson-trained Flick’s Buck (box 4) pinged the lids to win her heat, clocking 19.10 seconds from box four. All six career wins have been at this track and distance so must be another winning chance. Horchata (box 3) won his heat from box four clocking 19.15 seconds, when making his Albion Park debut. Not a quick beginner but can muster good speed soon after the start.

This is the Thunder final over the 395m. The Jedda Cutlack-trained Mitchell Street (box 2) led and got run down late to finish second behind Jagger Moves in his heat, when resuming from an eight-week break. He will strip fitter tonight and has a good low draw. Can ping the lids and lead all the way. The Travis Elson-trained Hope’s King (box 1) finished fourth in his heat behind Sleek Fury from box seven. He was impressive winning his previous two starts over this track and distance in quick times. He looks the obvious danger. Bogie Fury (box 6) pinged the lids in his heat from box four but got run down late by Sleek Fury. Looks a good place chance. Jagger Moves (box 8) will be out sped early but will be finishing off well in the straight. He is better suited to an inside draw but can’t be left out of the exotics.

A great field assembled in this Group 3 Super Sprinters final. The Tony Brett-trained Orchestrate (box 7) bounced back into winning form at Albion Park June 9 from box eight beating Impact in a good 29.82 seconds. That was his first run over the 520m since returning from a spell. He has good early speed and could lead all the way in faster time this week. The Jason Thompson-trained Equalizer (box 3) is currently in good form. He is unbeaten in three starts at this track and distance and has clocked a very fast 29.52 seconds. The Gavin Clifton-trained Photo Man was impressive last Thursday night winning the Flying Amy Classic from box one, clocking 29.77 seconds. The Leanne Hall-trained Extra Malt (box 2) is very talented and is always a winning chance.

This final has numerous winning chances. The Brent Kline-trained Keen (box 3) has a good low draw and could be the greyhound to beat. This son of Aston Dee Bee has won twice and been placed twice from six starts over this track and distance. The Cyndie Elson-trained Cincinnati Hope (box 5) has got good early speed and looks the likely leader. This daughter of the great Barcia Bale could hold on to win if there is trouble behind her. I’m Explosive (box 6) could get a good run cross if Cincinnati Hope crosses the field early. Pocket Money (box 8) was an impressive winner last Thursday night from box one, when making his Albion Park debut. Statistics say, it is hard to win from outside boxes over the 600m distance but he has won twice from three starts out of box eight.

Only four greyhounds can contest the Super Stayers Invitation race. These four greyhounds were offered an invitation from BGRC. Untapped (box 3) is now trained by Queensland trainer Selena Zammit, taking over the training duties from Dustin Drew. This daughter of Aston Dee Bee has been struggling to capture top form after she won the Sandown Cup final in May. Tonight, she makes her Albion Park debut and could lead all the way. The Tony Brett-trained Bedrock Fred (box 5) was an impressive winner of the Dashing Corsair last Thursday night from box six, clocking a fast 41.60 seconds. Zipping Kansas (box 7) is also making Albion Park debut for trainer Jason Mackay. He bounced back into winning form last start at The Gardens clocking a fast 41.50 seconds. That time was faster than the rich Ladbroke’s final won by Miss Ezmae on the same night. The small field suits him and looks the obvious danger. The Tomas Dailly-trained Gypsy Wyong (box 1) has the best draw. She has contested in the best staying races across Australia. She did finish second behind Untapped in a heat of the Sandown Cup in May.

Sydney trainer Jason Magri brings Our Amelia (box 4) up north to Albion Park for the first time tonight. She is Zipping Kansas’s travelling companion. This daughter of Zambora Brockie has won six of her eleven career starts. Last start, she was an impressive winner beating Barooga Franky by ten lengths from box six, clocking a fast 29.77 seconds. She has good early speed and should lead all the way. Top trainer Tony Apap has Declan Monelli (box 5) entered in this race. This son of Collision finished second behind Hopeful Hope last Thursday night from box seven. He should get a good run across behind Our Amelia. If so, he finishes second again. The Cyndie Elson-trained Dynamite Cyndie (box 3) can also show good early speed. She must be included into all trifecta and first four betting. The Travis Elson-trained Summer’s Queen (box 2) looks a place chance.

This is a strong 5th grade race. The Ned Snow-trained Shipwreck (box 2) and the Steve Withers-trained Panama Pepper (box 4) both drop back into this 5th grade race after contesting the Flying Amy Classic last week. They both look good winning chances in this race. The Cyndie Elson-trained Cincinnati Lana (box 6) has good early speed and may lead this race but just struggles to run the 520m out well. Cyndie Elson also has Cincinnati Bill (box 3) entered in this race. He is not a quick beginner but can finish off his races well and looks a place chance. The John Dart-trained Gypsy Del (box 8) will need early luck from this wide draw but is a talented greyhound. If breaks go his way, he will be in the finish.

The Steve Withers-trained Eagle Monelli (box 6) looks the greyhound to beat in this race. Tonight, he drops back to a 5th grade race after contesting the Flying Amy Classic. He has a tricky draw and a quick beginner drawn directly outside of him. Will need to begin well and hold his position early. The Tony Apap-trained Paddy Monelli (box 2) looks one of the main dangers. He has a good low draw and can win if Eagle Monelli finds early trouble. The Cyndie Elson-trained Hopeful Bella (box 4) looks the other danger. Last start, this daughter of the great Fernando Bale was impressive beating I’m Explosive from box five. She has another tricky middle draw to offset but can win if breaks go her way. The Travis Elson-trained Mumma’s Machine (box 1) could sneak a place from this great draw,

Another 5th grade race to round off this great night of greyhound racing. The Warren Nicholls-trained Protagonist (box 1) has been running well down the straight grass track at Capalaba lately over 366m. Tonight, he steps up to the 520m distance again and is well drawn. Should hold a good early position rounding the first turn. He could be the greyhound to run past Hopeful Lana late in this race. Expect the Cyndie Elson-trained Hopeful Lana (box 5) to be the early leader but she struggles to finish off well. The Robert Essex-trained Red Wombat (box 7) is a slow beginner but can finish off well in his races. Look for him to be steaming home late. The Reg Hazelgrove-trained Old Money (box 3) has a good low draw and looks a good place chance.