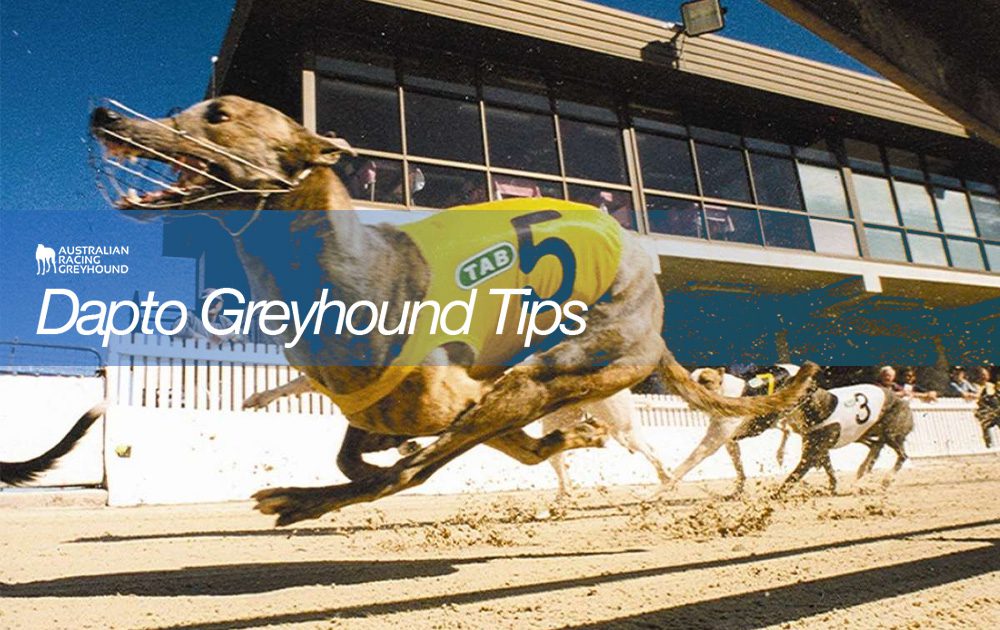 We have 11 greyhound races to sink our teeth into at Dapto on Thursday night. Let’s have a look at the top chances in each race, kicking off with a 297m maiden at 7:13pm AEDT.

Our standard maiden event to kick the card off tonight. Fat Pizza (box 7) made his debut at Dapto last Thursday from the same box draw. He began well, got checked soon after the start but managed to run home well late in that race. Should be improved from that outing and looks a winning chance tonight. I’m Right Here (box 6) pinged the lids wearing the red rug on her debut in the same maiden race as Fat Pizza. Not sure what went wrong soon after the start, but she weakened out badly to finish seventh. Might improve from this wider draw as she may have got crowded on rails last start, take on trust only. Yamazaki Riot (box 2) has been slow to begin in both of his starts at Nowra over the 365m but has managed to run home well late. On the quick back up from March 21 but could sneak into a place tonight from this low draw. Andrew Bell has switched Centodieci (box 3) back to the shorter distance tonight. He has early speed but has been failing to run out the longer distances. Might be another place chance here. Brendan Wheeler has sent Kenzie Bale (box 5) up from Victoria to be trained by Simon Rhodes. This daughter of Kinloch brae has been placed once from three country Victoria career starts. Drawn poorly tonight on her Dapto debut so might only be a place chance but must be respected.

Another maiden event but this time over the longer distance of 520m. In this field of seven starters we have two debutants – Mount Tate (box 6) and Jazzy Pack (box 7). Both are unknown but respect if there are any betting moves because this is not an overly strong maiden race tonight. This makes the race hard to assess. Ritza Patch (box 8) is probably the best formed of the greyhounds who have started their racing careers in this race. This son of star greyhound Ritza Lenny is coming off a one month break tonight. He ran third over this track and distance clocking a moderate 30.67 seconds from box seven February 10 and then ran third at Nowra February 21. Charlm Machine (box 2) has been running well over the 297m here at Dapto lately. Steps up to the 520m tonight which may test her late in this race. Fair Call (box 3) has shown some early speed in her five career starts to date. She is coming off a two month break tonight but must be respected.

Jackpot Ethics (box 2) was a good winner here last Thursday clocking a personal best time of 30.17 seconds from box 4. He has drawn well tonight and looks the greyhound to beat here. Valor (box 4) contested the heats and final of the GRNSW 5th Grade Series conducted over the past two weeks. He ran well in both races without much luck and this is an easier race tonight. He hasn’t drawn well but looks the obvious danger to Jackpot Ethics if breaks go his way. Charlm General (box 7) was squeezed out soon after the start and luckless last Thursday behind Jackpot Ethics. He also contested a heat of the GRNSW 5th Grade Series so can be considered a good chance tonight. Richard Muscat has also entered littermate Charlm Shadow (box 3) in this race. She has only been running over the Dapto short course distance 297m lately and might struggle to run out the extra distance late so looks a place chance only.

Wishful Fantasy (box 3) fell rounding the first turn in a heat of the GRNSW 5th Grade Series when contesting the lead. She drops back to the Dapto short course where she has won all two starts clocking fast times in each win. Providing she has recovered from falling March 10, she looks the greyhound to beat tonight. Andrew Bell has dropped back Cartel Master (box 5) to the short course tonight. This will be his first start at the Dapto 297m. He has been struggling to find form but can certainly win this race if he turns his latest form around. Quinnley Bale (box 7) was squeezed out just after the start here last Thursday from box four. Drawn wide tonight so she might get clear galloping room down the outside early. Must be included in the winning chances. Rob’s Roy (box 2) drew the red rug last week and threw the race away when ran wide rounding the only turn. Can only be considered a place chance tonight.

French Vanilla (box 3) resumes tonight from a three month break. She is normally a quick beginner and has won twice over this track and distance clocking fast times. John Reminis must think she is quite forward in condition to start her first up over 520m. She can win on her best form. Lightning Star (box 6) is poorly drawn tonight but runs well here at Dapto. She looks a winning chance if she gets clear galloping room early. Galloping Run (box 8) resumed last Thursday after a four month break. He had no luck from box five and when checked numerous times in the run. He has handled box eight well previously and might get a good run down the outside early tonight so should be in the mix. Canya Zeus (box 2) can certainly win this race on his best form but he has struggled in his three runs back from a spell. This greyhound is trained by astute trainer Andrew Bell so look for improvement tonight.

This is our master’s race tonight. Manilla Beef (box 8) resumed from a two month break last start at Wentworth Park over 280m March 11. That was his 100th career start. He began fast and was a little unlucky not to have won that race from box eight. Same draw tonight, he looks the greyhound to beat here. Hardaway Harada (box 7) has beaten Manilla Beef previously and has clocked slick times winning over the Dapto 297m. He prefers low draws but can muster speed soon after the start. Bow Buster (box 6) is drawn poorly tonight but is currently in good form. He finished two lengths behind Manilla Bean last start at Wenty but did draw two that night. Sammy Downs (box 5) has early pace and may be able to offset this middle draw. He is the oldest greyhound in this race – just over six years of age. Slingshot Chas (box 1) made his Dapto debut last Thursday where he finished last from box three after being checked. From the red rug tonight, expect improvement.

Miss Wanted (box 2) was just run down late last Thursday over this track and distance by the promising middle distance greyhound Tiger Jack. She has good early speed and should lead all the way in this race…..we may have to take short odds tonight. Chloe Bilal steps Fully Roasted (box 5) up to the 600m distance tonight. He worked home nicely to finish second at Wentworth Park March 12 behind Fascinate Mel over 520m. He has won over 600m at The Meadows back in March 2021 clocking a good time of 34.44 seconds, so distance suits here. Monkey Boom (box 4) has had two runs back after a three month break. Noticed him running home well at Wentworth Park last start behind Can’t Catch Ivy over 520m. Fitter now and has won previously over 618m at Richmond. Zambora Tan (box 8) may be best of the rest but looks only a place chance tonight.

Sonata (box 8) looks the greyhound to beat in this race. She was checked when vying for the lead at Wentworth Park last start over 280m from box four. Expect her to ping the lids again tonight and cross this field early and win. Rivergum George (box 1) likes wearing the red rug and looks the main danger tonight, if any. He has won from this draw clocking 17.25 seconds but back on June 17. Kalany Bale (box 2) should get a good run through from her good draw tonight so must include her in your trifectas and First 4’s.

Mount Banks (box 3) won his maiden race here last Thursday clocking 17.34 seconds from box eight. He jumped away fairly, then mustered good early speed. On paper, there isn’t lots of early speed tonight, so he may be able to push his way through this field early and win. Ferocious Barbie (box 4) is a fair beginner and may be able to run with Mount Banks early. She may be a danger tonight. Open Mieski (box 8) looks to get clear running out wide on the track tonight but doesn’t win many races – only one win from 21 career starts, but has finished in the placings seven times. Get The Edge (box 6) is poorly drawn tonight. She can show some early pace but only looks a place chance.

The Andrew Bell trained Monza (box 8) may be the greyhound to beat here. This son of Barcia Bale weighs in about 32.5kgs.This big boy appreciated clear galloping room from box eight at Richmond two starts ago. He clocked a good winning time of 22.83 seconds over the 400m. He makes his debut at Dapto tonight, but this might be his race. Miss Sharpe (box 6) has not started since January 27. She has good early speed but likes to run wide going around the home turn here at Dapto. This enables other greyhounds to rail and beat her. Harvest Moon (box 1) can also show early speed, and like Miss Sharpe, she scouts wide coming into the home straight. Brendan Wheeler has sent Adler Bale (box 2) up from Victoria to join the Simon Rhodes kennel. Has only won one race from 12 career starts. He debuts at Dapto tonight but may be able to rail through underneath a couple of wide running greyhounds in this race. Lucky Ethics (box 4) is poorly drawn tonight but may also sneak into the placings.

Tricky Free For All race here tonight over the short course to finish the night off. Call Me Senorita (box 7) can be hit or miss at the start. If she jumps fast tonight, she may be able to lead this field early and be a winning chance. General Cortez (box 1) is well drawn tonight and may be able to hold them out. If so, he is a winning chance. Nixon Bale (box 3) is a fair beginner but musters early speed given clear running early and can clock fast times – another winning chance. Cassia Bale (box 4) will give some of these greyhounds an early start but runs home well so must include her in your trifectas and First4’s. Princess Forty (box 6) has not raced since February 12. She is a speedy greyhound but will need galloping room early. From her tricky draw tonight, she might find this race too hard.