COWRA trainer Paul Braddon made the long six hour drive to Maitland on Friday night, with the car trip well and truly worth it after his promising sprinter Marbo’s Magic scored an emphatic victory in the Group 2 Maitland Gold Cup (450m).

Marbo’s Magic started on the third line of betting at $4.10, with the son of El Grand Señor and Willow Blaze the fastest heat qualifier going into the $36,000 to the winner event.

Jumping from box five, the black dog showed sensational acceleration to find the lead in the run to the first turn, holding off a mid-race challenge from gun Victorian Aston Bolero to kick clear in the straight, scoring by one and one quarter lengths in 25.02.

Braddon was in awe of his powerhouse greyhound, with the reality of the win slowly sinking in on Saturday afternoon.

“I was hoping he could jump from the middle draw – I thought if he could get out well then he was going to put himself right in the race, but I knew if he missed it he wouldn’t be able to beat all them good dogs.

“Luckily he came out well, although I started getting nervous when another dog raced up to him although I didn’t actually realise at the time what dog it was.

“When it raced up on his outside I started riding him home and thankfully he was able to find that little bit more and pull away from the other dog.

“He throws everything into his races and gives it his all, he is always completely buggered afterwards.

“He is a very hard chaser and when he comes out he just pushes them out of his way to get to the front.”

Braddon, who bred, owns and trains the 31 kilogram speedster with his wife Pam, said Marbo’s Magic has shown promise from an early age.

“He broke in very well and right from the first couple of trials I gave him I thought I had something special.

“We bred him, his mother and her mother – it all goes back along our own line.

“I don’t buy dogs. We only ever breed and train our own so it is terrific to win a race like this.”

A winner of nine of his 10 starts, eight of which were in best of day times, going into the race, Braddon said he never questioned whether his greyhound was ready for the rise in class, confident he had the raw ability to be competitive.

“I gave him a pretty good lead up to the series so I wasn’t too concerned about [his lack of experience].

“When he started racing he won a couple of low grade finals around the bush tracks here and then he went to Bulli.

“Although he was only against bush dogs there his time was outstanding and that was when I thought he might measure up to top grade.

“Following that race we took him to Temora where he won the Cup there and after that we thought if he is going to make the grade he has got to step up sometime.

“There was only one way of finding out just how good he is so we decided to come up to Maitland which worked out great.” 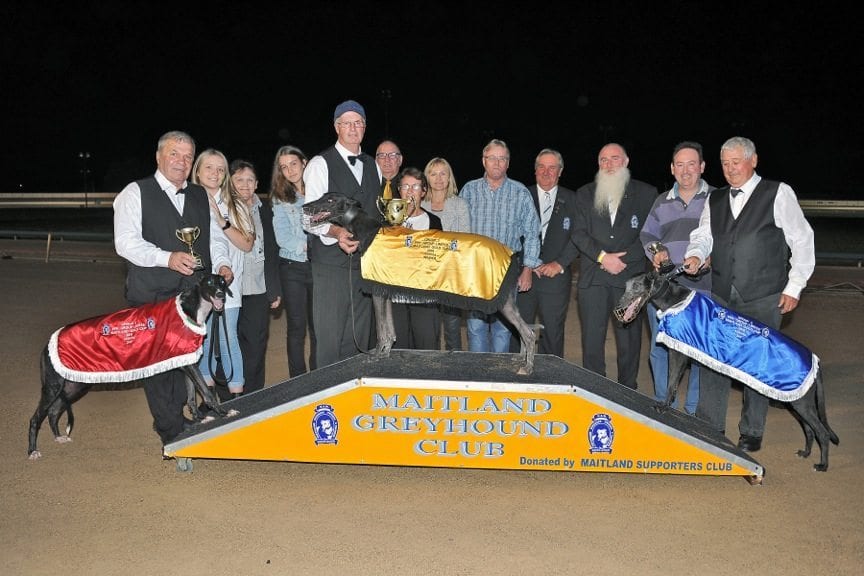 Braddon has now labelled Marbo’s Magic the best greyhound he has ever put a collar and lead on.

“I have been involved with greyhounds all my life.

“Basically I have either trained or helped my father out for about 40 years.

“We have had some good dogs – back in the 1970s my dad had a dog called Overflow Love and she won a lot of races in Victoria and we had a dog in the early 80s called Victory Point who was also very good.

“We have had a few nice dogs since then, but basically they have all been bush dogs as we don’t really travel that far – until this fella come along which was when I knew we had to have a go of it.

“After last night I think he has proven to be the best dog I have had.”

While nothing is official, Braddon said he is considering sending Marbo’s Magic interstate to continue his racing career.

“I will have to probably send him down to Victoria to Anthony Azzopardi.

“We haven’t made a final decision yet, but, although I don’t really want to part with him, you have to send him where the money is.

“The big tracks down would suit him as well – there is not too many of them up around here for him.”

For now though, Braddon is content to just sit back and enjoy the victory.

“I was just happy to see him win.

“When you breed them and rear them yourself it is great to get a good dog.

“Don’t get me wrong the prize money is nice too, but it is just so satisfying to see him go well.”