Brett Lee has tonight been announced as one of the inaugural 36 inductees in to the Victorian Greyhound Racing Hall Of Fame.

And the canine Brett Lee was to prove just as famous in his own sporting sphere, so much so that both megastars met during the 2001 Australian Cup series for a promotional photo shoot at the MCG.

Ironically, greyhound racing aficionados were constantly ‘clean bowled’ by the deeds of Brett Lee – on and off the track!

His first owner, Richard Kurkowski of Point Cook, paid $3000 in 1999 for Brett Lee as a three-month-old pup.

But after only a handful of starts – including a track record at Horsham – Brett Lee was sold for $100,000 to Darrell Johnstone, a South Australian car salesman and greyhound racing participant. 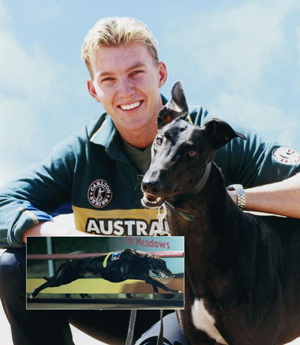 Johnstone entrusted the training duties of Brett Lee to Devon Meadows mentor Darren McDonald, who prepared him for the vast majority of his brilliant career.

“I thought he was a potential superstar after he won his first start at Ballarat… And when he broke the Horsham track record at only his third start, it got people talking,” McDonald said.

“I also remember driving home from Geelong one night… He had easily defeated one of my greyhounds, which made me think he was one of the best young prospects I’d seen for some time.”

“He wasn’t a magnificent looking type, but he would get up on his toes and prance around and pull out something special in front of the big crowds… He knew how good he was, and I think that’s what makes a champion,” McDonald said.

Brett Lee retired to stud just prior to being crowned 2001 Victorian Greyhound of the Year and immediately commanded a record introductory fee of $2750.

In 2002, the Australian greyhound racing industry was stunned when Brett Lee was sold to a consortium of New South Wales businessmen for around $800,000. Their intention was to export Brett Lee’s semen to the United States while utilising him on the domestic breeding scene.

Then, in late 2004, it was reported that Brett Lee had been sold to a high profile UK-based greyhound racing identity, for a staggering $3.75 million. But the deal was not clinched.

“As a sire, he certainly changed greyhound racing… Breeders were selling their pups for more money, and the export of his straws took the Australian stud scene to a new level,” McDonald said.

“I probably won’t get the opportunity to have another greyhound like Brett Lee,” McDonald said.

“His induction into the Victorian greyhound racing Hall of Fame is a real honour, and I’m very proud to have been associated with Brett Lee.”