Dave Hodgson has tonight been announced as one of the inaugural 36 inductees in to the Victorian Greyhound Racing Hall Of Fame.

The legend of Kilcunda canine chiropractor Dave Hodgson had its origins when one of his cattle dogs injured a leg.

Hodgson utilised his self-taught manipulative techniques on the kelpie and soon realised he had a “gift from God” – magic in his hands!

News travel fast via the bush telegraph, and word on this ‘miracle man’ reached a number of greyhound trainers.

One of these was a stalwart of the sport, Fred Knee, who later bred a few litters in partnership with Hodgson during the late 1960s and early 1970s.

Hodgson checked greyhounds from the front yard of the property he shared with his loving wife Lois.

And it’s a sure bet he would have ‘run his hands’ over most of Victoria’s best greyhounds in his time.

It’s been well documented that cars were lined up for 500-600 metres on a Monday, Wednesday, Friday and Sunday. Even trainers from South Australia would travel overnight to be first in line the next morning – at 6am! 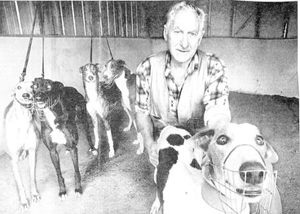 It’s believed Hodgson could predict what was wrong with a greyhound even before checking it.

“He was never taught… He had a natural instinct with animals,” said his grand-daughter, Janelle McRae of Carnegie.

“He was focused on the complete well-being of the greyhound; its happiness and health…

It wasn’t just all about the structure of bones and muscles.”

Janelle said her grandfather could pinpoint the problem with a greyhound as soon as it entered his property.

“Grandpa could tell what was wrong with them even before checking them,” she said.

“In later years he would watch the greyhound races on Sky Channel, and he could tell if they were sore… He would tuck that away in his memory bank for when he had to check them.”

Hodgson’s benevolence has been well documented. He wouldn’t take a cent from a battling trainer for checking his/her greyhound.

“He didn’t really want any reimbursement at all,” Janelle said.

“There was a guy who gave him $50 in various notes after having several greyhounds checked… Grandpa gave him back $60 and he didn’t even notice.

“Some trainers just couldn’t afford to pay anything but would show their appreciation by dropping off firewood, bread, fruit etc… Christmas time was crazy.”

Janelle said her grandfather was a genuine and selfless man.

“He was very honest, upfront, and funny,” she said. “He worked really hard, and was the same in private life as he was in the public eye.

“He was humble, and all for the greyhound… He didn’t do what he did for accolades, it never about recognition.”

Hodgson was presented with the 2001 Ken Carr Medal – the highest award for excellence within the Victorian greyhound racing industry – during the Greyhound of the Year ceremony at Parliament House.

His daughter, Kristine, and family (including Janelle) travelled from Bateman’s Bay in southern New South Wales to watch him receive the prestigious award.

“It was an incredible day… But if he had known it was for him, he wouldn’t have gone,” Janelle said.

“He was hearing impaired and it wasn’t until he looked at the screen that he saw his name… It was a complete shock.”

Inaugural 2002 Australian Greyhound of the Year Boomeroo was the last greyhound Hodgson checked before he became ill and passed away.

Ironically, Hodgson had formed a ‘special bond’ with the champion stayer.

“Boomeroo disliked being checked and was extremely difficult to handle,” Janelle said.

“But grandpa had a special touch about him and they became the best of friends… He would give Boomeroo cream biscuits and after he started turning his nose up at them, he would give him chocolate biscuits.”

Hodgson’s induction into the Victorian greyhound racing Hall of Fame is a proud moment for his family.

“It’s really overwhelming… He passed away seven years ago, but people still remember him for his nature and spirit,” Janelle said.

Dave Hodgson passed away in September 2002.