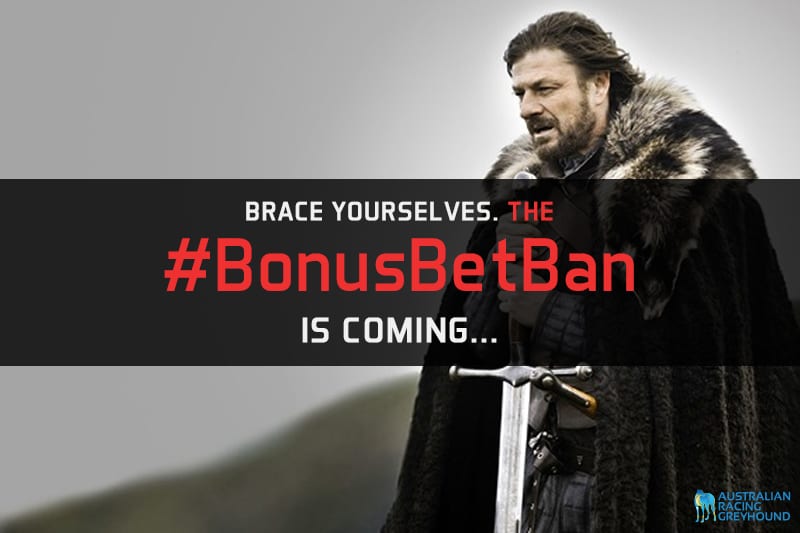 Did you know the Australian government is about to ban all bonus bets? Like literally all of them everywhere! Not just a state here or a state there, but the whole shabang!

If you were relying on mainstream media to tell you, then we can almost guarantee you have no idea the end is nigh.

In fact, if you were relying on your government to tell you, then you’d be cast. They still haven’t publicly announced the Bonus Bet Ban end date. But ARG has been assured all Signup Offers and bonus bets will be banned by the end of this month (May 2019).

What is the #BonusBetBan? What do you mean bet bonuses will be banned?

Well you know that whole anti-gambling vibe that has gone through every public office in Australia? You know the one that had even Liberal governments that are supposed to be politically right, leaning so hard left they looked like they should be protesting a dam somewhere?

The same green coloured Liberals and Nationals that banned NSW greyhound racing briefly, and almost put all racing to the sword?

Well those gentle folk have decided we are all too easily led to be allowed to get any bookmaker bonuses and signup offers from our online bookmakers. Lest we might be responsible for our own decisions; and we can’t have that can we?

The changes officially come in to play through something called the National Gambling Framework.

If you are more than a one time visitor to ARG or Australia’s best sport betting sites, then you’ll know this rubbish has been pretty comprehensively covered last year in 2018. Here’s a few yarns that were thrown up around the time:

There are resource pages about the Bonus Bet Ban but we’re guessing no one would’ve been too worried at the time to read it back then:
https://bettingsite.com.au/bonus-bet-ban/
https://australianracinggreyhound.com/bonus-bet-ban/

I mean this couldn’t be real could it? They wouldn’t seriously ban something as ridiculous as punter’s bonuses without talking to us?

Well, yeh to answer that, they did.

It’s now London to a brick on that these bonuses will all be cactus before the end of this month.

Any coincidence in the timing with the Federal Election on 18th May? Yeh, nah, we don’t think so either.