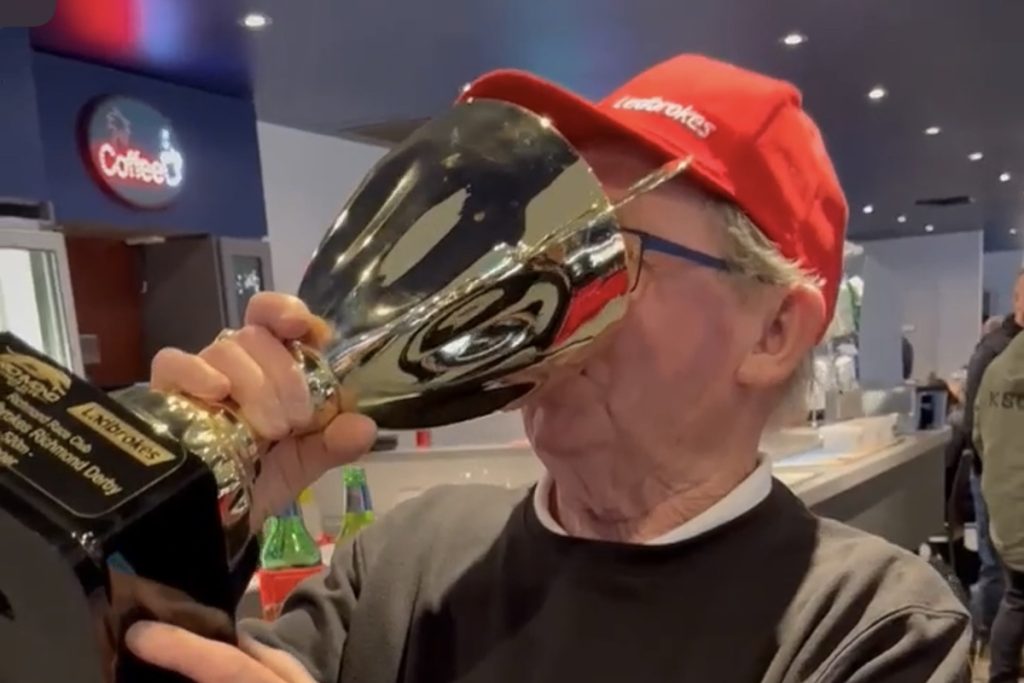 There were plenty of tears after the running of the G2 Richmond Derby final on the brand new Richmond circuit over the modified 520m distance, courtesy of breeder, owner and trainer Rodney O’Brien with his charge He’s Grand causing a mighty upset as the rank outside of a star-studded field at $34 with Palmerbet.

Exiting from box five, the son of Fernando Bale and She’s Grand posted a slick 4.27 opening section and whilst there were plenty of chasers in pursuit, the 29.9kg chaser scored by 1.5 lengths at the finish in 29.49. It was his 7th career win from start 17, the brindle pocket rocket doesn’t turn two until the 1st of July, with a promising career ahead of him.

Western Sydney-based O’Brien is having a fantastic year in the training ranks, having already notched up 15 winners for the year, already surpassing his total of 14 for 2021.

He’s Grand’s is out of She’s Grand’s first litter, which also includes talented chaser Agland Luai, a winner of 6 from 15 starts, including 4 victories at Wentworth Park.

Chasing Fernando ran the race of his life to finish second for trainer Craig Watts, while pre-race favourite found early trouble, but as expected rattled home late to place third.

Despite a horror run of box draws, Good Odds Cash overcame the odds in last night’s G2 Richmond Oaks final, shangaining out from the seven alley to lead throughout and break her own track record in the process, clocking 29.24.

The daughter of Collision and Nino De Oro has now won 23 of her 46 attempts, and is arguably one of Australia’s most talented and in-form bitches, successful in her past three outings. Last night’s $40,000 winner’s purse added to her prize money total which now sits at $248,130. With an array of special events still to come in 2022, a tilt at the second instalment of the Million Dollar Chase series later in the year could see the Hurst family dancing on the presentation dias once again like they did with Good Odds Hara back in 2019.

Ultra-consist chaser Fantastic Raven lost no admirers with another outstanding effort to finish second for Jason Mackay, with Ritza Donna for Mark Gatt in third.