Highly Blessed has tonight been announced as one of the inaugural 36 inductees in to the Victorian Greyhound Racing Hall Of Fame.

Highly Blessed had a God-given talent. Perhaps the divinity was a result of her dam (I’m Blessed) being blessed by a Catholic priest in Queensland.

Doug and Lorraine Ferremi had offered I’m Blessed to a nephew who had been blinded in an accident on the proviso she be returned to Victoria for breeding purposes.

Subsequently bred and raced by the Ferremis of Kialla, Highly Blessed was the golden girl of greyhound racing in the early 1990s.

But as a pup, Highly Blessed was somewhat of a loner. 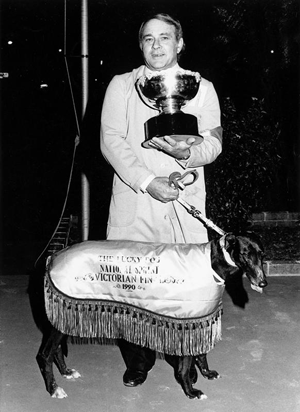 “She didn’t really mix with her littermates… She’d stand by herself at the gate, waiting to be fed,” Doug Ferremi said.

“But when the pups were free galloping she’d jump over the top of them to get to the front… She had her own idiosyncrasies and was different from the other pups.”

The Ferremis realised at breaking-in stage that Highly Blessed was “something special”.

“She was well above average while undergoing her pre-race education,” Ferremi said. “We knew she was going to be top class right from the start.”

And they were to prove prophetic words…
Between November 1990 and March 1991, Highly Blessed put the seal on her greatness winning four major finals – 1990 Melbourne Cup, 1990 XXXX Trophy, 1991 Adelaide Cup and 1991 Golden Easter Egg.

“Those wins were huge thrills… But none was better than the other,” Ferremi said.

“She invariably drew bad boxes in big races… At times I couldn’t believe it, but it didn’t worry her as she was brilliant out of the boxes.”

Highly Blessed had been voted by the WGRF as one of the world’s best eight greyhounds.

She and dual national sprint champion Sandi’s Me Mum at the time were the only two greyhounds outside North America to be selected.

She also won the 1990/91 Racing Animal of the Year, which was presented by the Variety Club.

Highly Blessed was one of Australian greyhound racing’s most marketable products during her heyday – a canine PR machine for the sport.

She was even the subject of a human interest story on Channel Nine’s A Current Affair, which was fantastic exposure on national television.

Highly Blessed provided the Ferremis with some magical moments they will cherish for life.

But the biggest disappointment they experienced was that Highly Blessed could not be considered for the 1990 Victorian Greyhound of the Year (GOTY) award.

Highly Blessed was deemed ineligible for the GOTY as she failed to satisfy a 15 metropolitan races stipulation, having only contested 14 city races during 1990.

Highly Blessed was suffering from deteriorating health and cancer when she died on February 10, 1999 – aged 11 years and three days.