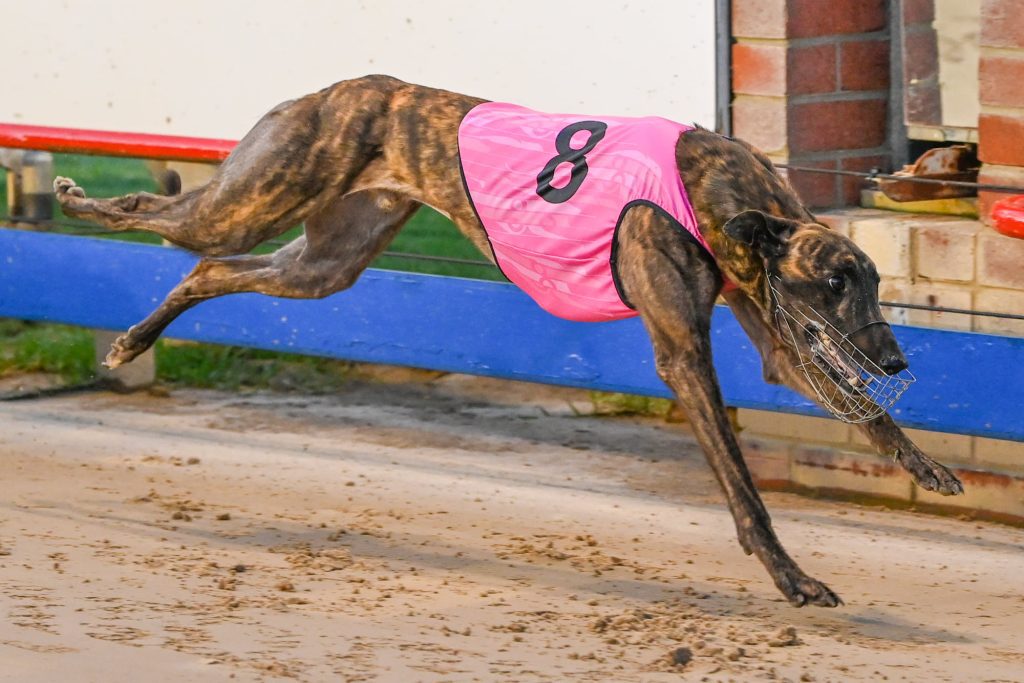 Fastest Group 1 Sale Cup heat winner Jarick Bale will have plenty of work to do to cross the field from box eight but AustralianRacingGreyhound.com’s exclusive greyhound ratings suggest the Mark Delbridge trained greyhound is well over the odds at the $6.00 currently offered.

Greyhound bookmakers have made Jarick Bale third favourite for the race behind Mepunga Ruby and Zac’s Entity despite having the premier track and box draw form of the three. Starting nine times from box eight, Jarick Bale has won four races and been placed a further three times.

From the outside box Jarick Bale will get the opportunity to race outside the early pace which should see Knicks Bale, Drako Bale and Untapped applying pressure to Mepunga Ruby early, who wants to race toward the middle of the large Sale greyhound track. Jarick Bale will be ideally placed early to capitalise on any crowding.

Chasing a second Sale Cup (650m) title on Sunday night, Jeff Britton is however cautiously optimistic it will be a case of third time lucky on the Group 1 stage for the $2.10 favourite Mepunga Ruby in the Boxing Day showpiece.

Britton won the Sale Cup in 2014 with classy West Australian Star Recall, while his GRV Hall Of Fame inductee father Allan and brother Robert have also won the event in 1997 and 2010 with Shannen’s Storm and Symmetry respectively.

Mepunga Ruby (Box 1) has been racing in elite staying company since August, winning the Group 3 Speed Star (725m) at The Meadows, running third in the Group 1 Bold Trease and sixth in the Group 1 Topgun Stayers, incredibly missing a place just once in her last 19 starts.

Mepunga Ruby dropped back from ‘700’ for last Sunday’s Cup heats, where she finished strongly at her Sale debut to score in 37.37sec, the slowest of the four run-offs, and then drew Box 1 for the $75,000 to-the-winner final.

“She was the last one left, so Craig (Solkhon, kennel representative) didn’t have to choose,” Jeff Britton said of the box draw.

“I’d rather be drawn there. Boxes win these races. If Do It had ‘the red’ in the (Group 1) Hobart Thousand last week I think he would’ve won by three or four lengths.

“I trialled Mepunga Ruby at Sale last week but she looked like she was still feeling her way around in her heat.

“She rails fairly well on the city tracks but I trialled her off ‘the red’ and she wanted to get out to Box 4 and she seemed to do the same thing in her heat.

“She went into the first corner running second and came out fourth. You can’t do that.

“Sale can be a tricky track up the back but once she got around there she really took off.

“I really want ‘700’ with her now. She keeps getting stronger. But over 650m, there’s a lot more pace in the race. I think Untapped (Box 5) will probably lead but hopefully we’ll be running first or second and then we’ve got to worry about Zac’s Entity (Box 6).”

Zac’s Entity, which is trained by Kel Greenough, who’s aiming at back-to-back Sale Cup victories after Houdini Boy was successful in 2020, is undoubtedly the query runner.

After incurring the wrath of the stewards in the Group 1 Topgun Stayers, the lightly-raced talent made his return in last weekend’s heats and did just enough to win in 37.14sec, edging out Group 1 Hume Cup winner Knicks Bale (Box 3).

Knicks Bale, trained by Correy and Samantha Grenfell, is one of three‘ Bale’ finalists, along with Mark Delbridge’s fastest qualifier Jarick Bale (Box 8) and Andrea Dailly’s Drako Bale (Box 4), which is striving to go one better than his illustrious mother Fanta Bale, runner-up in the 2017 Cup final.

Local support will be with hometown hero Omega Tyson (Box 7), which is trained, owned and bred by Barry and Heather Harper at Seaspray.