Kantarn Bale has tonight been announced as one of the inaugural 36 inductees in to the Victorian Greyhound Racing Hall Of Fame.

Of all the champions to have graced Graeme Bate’s kennel, one stands out above the rest – Kantarn Bale.

So highly does Bate regard Kantarn Bale, that he has no hesitation in comparing the son of Light of Fire and Jindara Bale to Australia’s greatest ever thoroughbred, the mighty Phar Lap.

“Phar Lap had a big heart and I believe what set Kantarn Bale apart was that he was all heart. He had a hell of a big chest…a really deep chest, and his big heart shone through in the way he raced.”

“He’d go left or right as if he had a jockey on his back. He was the superstar of his time.”

Bate remembers the day in 1999 when Kantarn Bale first arrived at his property as 17 month old “pre-trainer”, and recalls him being a stand out from day one. 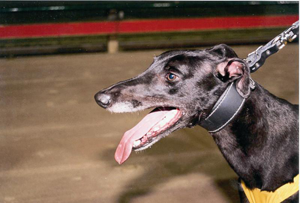 “I have a system with [NSW breeder] Paul Wheeler which involves him sending about a dozen pre-trainers to me every few months. [Pre-trainers are young dogs that have been broken-in and are usually about 6-8 weeks away from their first race start.]”

“I remember when Kantarn Bale first arrived he was big and leggy. He really stood out as a looker, but just because a dog looks good doesn’t mean it can run. But right from his first ever trial [at Geelong] I realised the incredible tenacity that Kantarn Bale had”, Bate said.

Not only was Kantarn Bale showing plenty of determination, but the times he was trialling for a pup his age were phenomenal. As such, Bate aimed high with Kantarn Bale right from the start of his career, sending him to Adelaide to make his debut in the Group 2 South Australian Derby series.

Kantarn Bale ran second in the heat and final of the SA Derby after leading virtually all the way in both of those races only to be pipped on the finish line by seasoned topliners Irinka Bazza and Great Wish respectively.

So impressive was Kantarn Bale in those races that he soon had a cult following, with the highly respected Bate declaring him as the best greyhound he had ever trained.

By year’s end Kantarn Bale had also captured the Group 1 Silver Chief, and in 2000 he continued on his merry way winning the Horsham Cup, Warrnambool Cup, Shepparton Cup and the Brisbane Cup, and was a finalist in several other group races.

Then tragedy struck, with Kantarn Bale succumbing to a serious wrist injury and being forced into a premature retirement in May 2001. Offers were flooding in from breeders wanting to use him at stud, but sadly Kantarn Bale never sired a puppy.

“We took him all over Australia [to visit health experts] and discovered he was infertile”, Bate reflected.

This was not to be the end of Kantarn Bale, however. With breeding off the agenda Kantarn Bale came out of retirement nine months after injuring his wrist, a decision that was scoffed at by some who thought the superstar would only sour his outstanding race record.

“People thought I was flogging a dead horse…but not only did he come back, he came back as good as ever”, Bate said.

Evidence of this was when Kantarn Bale, two years after winning the 2000 Group 2 Warrnambool Cup, contested the final of the same race.

“His second Warrnambool Cup win [2002] was something I’ll never forget. I remember standing on the hill watching the race and as they came to the home turn he was gone. He was just so far back. But in the home turn he ran wide and then hunted to the rail in search of a clear passage and he somehow managed to win. We were dancing on the hill.

It was one of the best wins I have been associated with. I just couldn’t believe it”, Bate said with a smile.

Three months later Kantarn Bale retired for the second and final time [in August 2002] with the outstanding statistics of 77 starts for 44 wins, 10 seconds and five thirds.

While the racing world will remember him for the thrills he provided on the racetrack, Bate explained that there was another side to Kantarn Bale.

“He won $360,000 in prize money despite missing nine months of racing, but more importantly he was a family dog and the Wheeler family loved him. For instance, when Kantarn Bale drew the pink box (8) Paul’s son Brendan would dye his hair pink.”

“Kantarn Bale didn’t like people patting him when he was in his kennel, but when he came out of his kennel he’d lick everyone he saw. He died earlier this year aged 11, but up until then he was a pet who spent much of his time on my Verandah”, Bate said.

Kantarn Bale may have had a big heart, but it wasn’t as big as the impact he had on Bate, the Wheeler family and the greyhound industry at large.