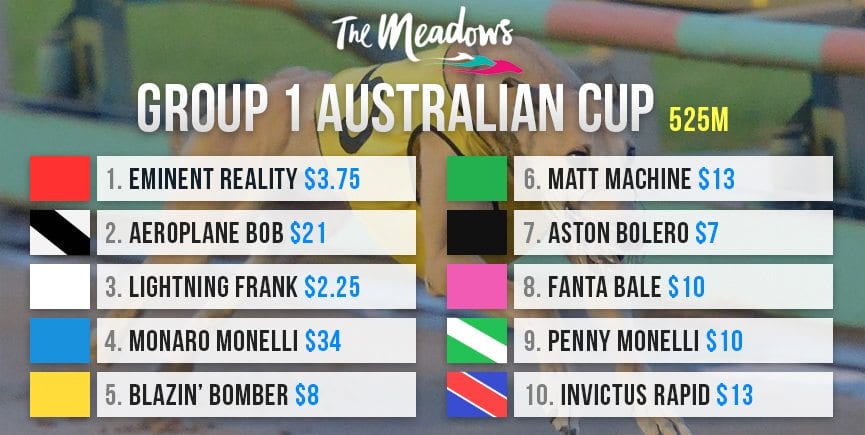 LIGHTNING Frank has been installed as the $2.25 favourite to win next Saturday’s Group 1 Australian Cup (525m) at The Meadows after his scintillating heat victory over the weekend.

The Matt Wright-trained greyhound speared the lids from box eight and never looked in danger, charging to the line to defeat Invictus Rapid and Crackerjack Choc by just under four lengths in a blistering 29.53.

The son of Black Magic Opal and Kirabilli Abbie will start from box three in the $250,000-to-the-winner feature, a draw from which he has won two from two.

If he is successful in the Cup, Lightning Frank will take his career earnings beyond the $537,000 mark – a figure also courtesy of two terrific wins in the Group 1 Silver Chief Classic and the Group 1 Temlee.

The biggest threat according to the market is Kel and Jackie Greenough’s Eminent Reality which has been installed as the $3.75 second elect.

The former WA greyhound was ultra impressive when winning his heat from box one, running down Penny Monelli to score in 29.62.

Eminent Reality has benefited greatly from the box draw, having drawn the coveted rails alley once again for the decider.

Also drawing identically to its heat is Jason Thompson’s Aston Bolero which will exit box seven in the final.

Starting wearing black in his qualifier on Saturday night, the son of Fabregas and Aston Dream carved across from box seven and never gave anything else a look in, defeating Group 1 National Futurity winner Striker Light by more than seven lengths in 29.91.

The only other runner under the double figure mark to win the final is Blazin’ Bomber for trainer Darren Pattinson. The powerhouse performer used box one to perfection in his heat, unleashing a strong run down the back straight and kicking clear to defeat Helga Bale in 29.74.

The two-time group 3 winner will be aiming for his first group 1 victory when he contests the Australian Cup final which will be his 11th appearance at group level.

You can read our comprehensive recap of the Australian Cup and Super Stayers heats here.

The box draw for the 2017 Group 1 Australian Cup is as follows: