Ned Bryant has tonight been announced as one of the inaugural 36 inductees in to the Victorian Greyhound Racing Hall Of Fame.

He was considered the Bart Cummings of greyhound training ranks and was also one of Australia’s most respected canine chiropractors.

Bryant was only 14 years old when he caught the greyhound racing bug.

“The earliest influences on his career were trainer Harry Ralston, who lived just up the road in West Dandenong, and legendary breeder Rod Deakin,” said his son, John, of Stratford.

“Dad & Rod became mates in the late 1950s… They loved a bet and would often attend greyhound meetings at White City and North Melbourne.”

Bryant owned a car dealership in Dandenong for many years while establishing his reputation as the sport’s “Silver Fox”.

His “Silver Fox” sobriquet was an obvious reference to legendary Australian tennis coach, Harry Hopman, who pulled off many tactical master strokes as non-playing captain for Australia in Davis Cup ties during the 1950s and 1960s. 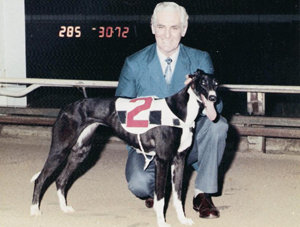 Ironically, Bryant – like his tennis counterpart – was a master tactician who turned greyhound training into an art form.

In a distinguished 50-year association with greyhound racing, Bryant won virtually every major feature on the Victorian greyhound racing calendar with his canine protégés.

“He also raced Irish Temptress, the dam of the immortal Bold Trease who he and mum (Maureen) bred,” John said.

Bryant was also one of the sport’s most in-demand canine chiropractors.

“At first it was ‘trial and error’, and he was only charging $1 per greyhound,” John said.

“He’d manipulate hundreds of greyhounds a week, with trainers travelling from as far away as Albury to have their greyhounds checked at his Cranbourne home.”

A long-time committeeman at Cranbourne Greyhound Racing Club, Bryant retired from training after winning the 1991 Australian Cup with Franklin Deano under emotional and almost tragic circumstances.

Only nine days prior to the cup final, Bryant was fighting for his life in Dandenong hospital’s intensive care unit after suffering a ruptured aorta in a car accident. He underwent an emergency five-hour operation and was reported to have only a 50/50 chance of surviving.

And Bryant didn’t know the cup result until midnight that evening as he fell asleep after listening to only half the race.

In 1995, the Melbourne Greyhound Racing Association paid tribute to Bryant.

Hosted by the Silver Chief Club, almost 200 guests honoured a legend of the sport in a ‘Roast to Ned Bryant’ night.

At the time, an emotional Bryant told Olympic Park’s packed Yarra Room that he would always value the friendships and treasure the memories he had derived from greyhound racing.

“It (greyhound racing) has really been my life and I’ve made some wonderful friends,” he said. “I love the sport; it’s as simple as that.”

In recent years, the Greyhound Racing Victoria (GRV) Board has ensured the legacy of Bryant – who served in the nation’s armed forces during WWII on the Kokoda Track in Papau New Guinea – will long be remembered.

GRV initiated the Ned Bryant “Silver Fox” award, which is presented annually to a person (under 35 years of age) for showing outstanding potential in the training, breeding and promotion of greyhound racing.

“The industry needs characters, and dad’s induction into the Victorian greyhound racing Hall of Fame is fantastic,” John said. “He wanted to succeed in the sport, and he wanted to impart his knowledge.”