Noel Banks has tonight been announced as one of the inaugural 36 inductees in to the Victorian Greyhound Racing Hall Of Fame.

Born in Dalmore near Tooradin in May 1921, Noel Banks OAM spent his early childhood in Oakleigh where he went to the local primary school and then to Caulfield Technical School.

His first job was with the Singer sewing machine company in Melbourne where he earned 17 pounds and six shillings a week.

Banks later worked at the West Oakleigh abattoirs and ‘graduated’ to the Oakleigh brickyards where his father and three brothers worked. He returned to the brickyards after WWII and eventually bought a truck to cart bricks until the late 1960s.

When he was 11 he was given his first greyhound – Winellie – by an uncle who had rescued the dog from injury after it was bewildered by the traffic in Flinders Street.

He began following coursing in 1934 after the opening of the Sandown Speed Coursing track where he won his first plumpton competition. 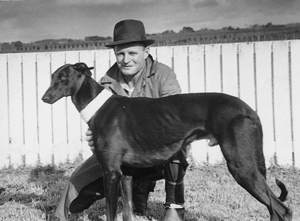 Winnellie, was bought for 10 pounds (around $685 these days). He also raced one of Silver Chief’s pups, a greyhound named Cansia, which had his first win on the tin hare at Harold Park.

Banks won an unprecedented 11 Waterloo Cups as either the breeder and/or trainer.

One of these Waterloo Cup winners, Sylvan Prince also won three country cups and was runner-up to the immortal Temlee in the 1974 Maturity Classic.

“He left nothing to chance in the preparation of a coursing greyhound… And he gave plenty of thought to breeding,” said incumbent NCA president Tony Mills, who was 10 years old when he started walking greyhounds with Banks.

“I picked up a lot of things from Noel, from both a training and administrative perspective.”

Banks devoted a lifetime to sport but particularly to his first passion, coursing.

Banks became a member of the NCA executive in 1955, representing the Tynong Coursing Club.

He commenced as NCA secretary in 1969, initially for a three-month period, but stayed in the position for 17 years.

Before joining the NCA, Banks was one of the original directors of the Melbourne Greyhound Racing Association (MGRA) and was appointed to the Greyhound Racing Control Board (GRCB) in 1964, which he served with distinction for 24 years.

“Noel was proactive and always searching for ways to improve coursing… He was a deep thinker, and he didn’t want his name up in lights,” Mills said.

“And he wouldn’t stand for any skulduggery… He was straight down the line and kept a lot of people honest.”

In addition to his work in greyhounds, Banks was a Justice of the Peace and a committeeman of the Bendigo Coursing Association.

Noel Banks was awarded the Order of Australia Medal in 1986.