IN four weeks time, the New South Wales greyhound racing industry is coming to an end.

Thousands of jobs will cease to exist. Families will have food taken off the table.

Greyhounds will be re-homed, shipped interstate or destroyed.

Good, honest people will have their legacies and life’s passion ripped away.

The actions of a few criminals will impact on the lives of thousands.

They’ll let the criminals define who we all are.

This is the reality we could have faced had Mike Baird and the NSW Liberal Party had their way.

It seems like a lifetime ago that Mike Baird announced his decision to ban greyhound racing in NSW from July 1, 2017, yet in many ways I still remember that moment as if it were yesterday.

I guess its one of those things – you’ll always remember where you were when you first heard the news… kind of like how my mum says she’ll never forget what she was doing when she heard Princess Dianna had passed away.

When I heard about the ban I was in the middle of moving house. I was scrolling through Facebook in my office when I saw someone had shared Mike Baird’s Facebook post.

I must have read it three times before it struck me – and even then I thought it was a hoax.

I remember calling my boss – wailing down the phone line hoping he’d tell me there was no way it could be true. I broke down in front of my partner – it was like someone had just died.

It was one of the darkest days of my life.

It was probably the toughest working day of my life – speaking to trainers who had had their hearts ripped out of their chests, just like mine had been.

Thankfully, a few months later, political pressure caused a backflip – much of it was influenced directly by the greyhound industry and our supporters. However, those three months were arduous for the industry – countless tears were shed and at times all hope seemed lost.

Looking back, I am proud of what we achieved as an industry, and I am also proud of the coverage I was a part of providing to participants – we managed to convey the terror and uncertainty of the future after the announcement, as well as the highs and lows which followed.

While things are starting to look up now – I still can’t help but reflect on the past 12 months – and I find myself wondering what would be happening right now if the ban was still going ahead?

In 2013 I moved back from Sydney where I was working at Sky Racing as the producer of the Catching Pen.

The decision to come back home was largely influenced by my passion for greyhound racing – I had grown up with these dogs and it had always been my dream to train my own – so that is what I did.

Since then my partner Joe and I have learned a lot about training – much of it has been trial and error – but now we are finally seeing some success with our small team of dogs.

When the ban was announced we didn’t know what we’d do – we toyed with the idea of moving interstate – but with both of our families in NSW it was a far fetched plan.

We were faced with the reality that everything about our lives and identity– about who we were – was going to be ripped away from us.

On top of that, I had no idea whether I would have a job on July 1, 2017 – I am a greyhound racing journalist and how do you write about greyhound racing when the state you live in has outlawed the sport?

What would have happened to my dogs if the ban went ahead? I only own a couple of greyhounds – and all of them are assured a home when they finish racing – but would I have sent them interstate to finish their careers?

The thought of my dogs, which are like my children, being trained by someone else tears me apart. Not waking at the crack of dawn and going into the shed to see their happy faces and wagging tails, taking them for a walk, seeing them run and loving life – it was to much to bear at the time and in many ways it still is.

Of course I don’t have to worry about this any more, but the wounds from the ban are still raw for me and for many other participants…and while they will eventually heal a scar will always remain over this period in the sport’s history. 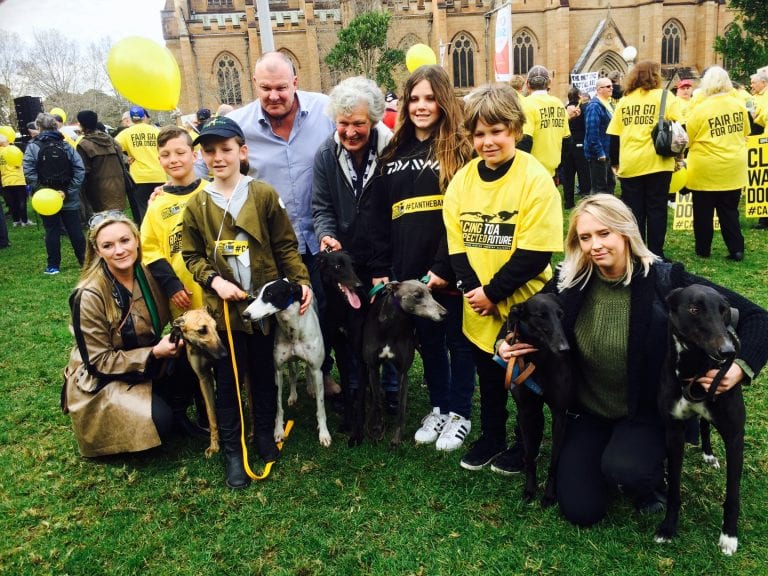 And what about the dogs? Those trainers who couldn’t afford to keep their dogs without receiving some return from racing them – where would they be now?

It’s all too much to think about and almost incomprehensible that a democratic government could shut down an industry based on a flawed report when only a minute percentage of participants had been caught doing the wrong thing.

It’s safe to say the greyhound industry will never forget the terror caused by former Premier Mike Baird and his then-Deputy Troy Grant.

However, since then we have proven that we can rebuild. As an industry we have pushed for tougher regulations, embraced change and strived to ensure greyhound racing flourishes for a long time in the state.

There is still great uncertainty over the industry – can we survive without proper funding? Will we still face death through over regulation?

We can only hope that the boys and girls on Macquarie Street are prepared to work with us.

No one knows what the future holds for greyhound racing in NSW – but it sure looks a lot better now than what it did on July 7 last year.

Tell us what you think – where were you when the ban was announced and what were your initial thoughts? Do you think the industry will survive in NSW long term? Let us know in the comments…