On Thursday Soviet Missile produced a devastating display of sustained speed to demolish the Dubbo 608 metre track record. I rang Toby Weekes for his thoughts on his superbly bred chaser and I was lucky enough to catch him in the middle of Indian food and celebratory beers with owner and friend Frank Elniz.

The flying machine by Where’s Pedro out of Jacinta Bale destroyed the former track record of 35.08, running a staggering 34.70. Ironically, the record was formally held by talented stayer Freddy’s Smile, also a Toby Weekes trained and Frank Elniz owned dog.

Frank and Toby have had a good run of success, with Freddy’s Smile and Soviet Missile combining to make three group one finals.

“He’s got the greyhound bug badly. He is really passionate and has bought a farm just for breeding. He has bitches from Hallinan and Pringle lines and will focus on those. I’ve been mates with him for more than 10 years and it started when I asked him to go halves in Freddy’s Smile, it all snowballed from there. He seems to be lucky”, Toby explained in relation to owner and mate Frank.

There is definitely a lot of quality in the Weekes kennel at the moment, but this has been a well laid and dedicated plan, with Weekes finding lines and investing heavily in them.

“We identified lines we liked with Jacinta Bale and Ice Dancer, and have backed them in with a lot of purchases. We were really happy with Soviet, and have bought into the next litter of Jacinta Bale’s and hope to carry the line on from there.”

“Indian Light is a young dog we have a big opinion of, and we also have Jolly Jill, Mission Belle and Back in Town from the litter. So we are well stocked with potential broodies there. I really like Jolly Jill as a young bitch, I think we won’t see the best of her till she gets to 500. Mission Belle is another that goes pretty good, she won well at Dubbo. I also have a dog from the litter being trained by Amy Bennett called Redford, who goes well.”

Weekes has also dotted the I’s and crossed the T’s when it comes to finding future breeding success on the Ice Dancer line.

“We haven’t actually got a direct daughter of Ice Dancer, but we got a bitch from Skates called Crackin’ Sort who is a smart bitch, we liked her a lot. Skates was a freak, but injury cut her career short sadly. She also died while in pup to Swift Fancy, so we were lucky to get one of her daughters early. I’ve also purchased some pups from her sister Magic Castle, who was a really nice bitch in her own right. They never saw the best of her due to injury, but I’ve got a lot of confidence in the line and she is the only broodbitch left from the Where’s Pedro litter.”

Weekes hasn’t had all this success come overnight, and has had a lot of help to get where he is currently.

“I couldn’t have got the dogs to where they are without the help of my wife Jess and my dad Gus. I’ve also got a full time kennel hand helping out called Andrew McMahon, I couldn’t ask for a better helper around the place. It really is a team effort. Dad helps with a lot of the driving, we take the dogs to Quakers Hill to get checked and that’s a three hour drive. It puts pressure on the team though, the dogs need to win to pay for all dads speeding fines,” Weekes laughed.

“Dad also helps out a lot at the farm. We have a Where’s Pedro – Motown Girl litter on the ground that are a few months old and Pretty Fancy just had one pup to Barcia Bale. We were shattered she only had the one pup, we love that line as well. They just keep producing. Pretty Fancy was a talented bitch, but a broken leg trialling at Coonamble stopped her from reaching the racetrack. She was only two lengths behind Fancy Liza, who held the Richmond track record. We also have a Barcia Bale straw waiting for She’s Purring, who we think is about to come on season.”

The future looks very bright for the Weekes team on the breeding side of things, but the short term looks fantastic as well, with Soviet Missile hitting his straps over the middle distance.

“Long term we are planning to target feature 600m races. We think he can get 700m in time and that’s where we might see him at his best. We will know more when we travel to Victoria and take on the big boys.”

“The dog has made two group one finals over 500 and we decided to take our time with him to look after the dog long term. He’s never had a lot of box speed and we always felt the distance would suit him. He only turned two in October and has only had the 25 starts. We think the best is ahead of the dog.” 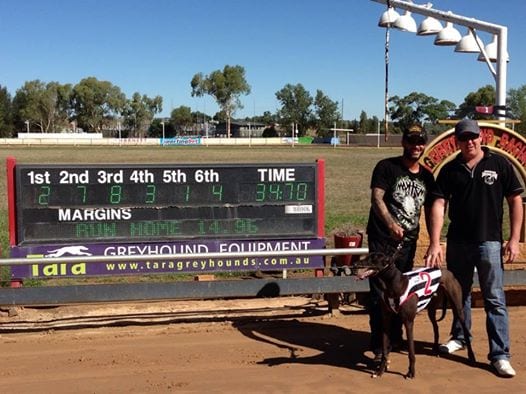 Won’t be the last track record this dog breaks over 600!!

Won’t be the last track record this dog breaks over 600!!