Few spectators would know how special Survived is to her trainer Karina Britton. The black speedster with the heart of a lion returned to the track after five months on the sidelines last week and was too classy for her competitors over the 400 at Bulli. However, it was the arduous journey to get her to the racetrack in the first place that is truly a remarkable story of love, hope and dedication.

Affectionately known as Ruby, Britton describes how not only her racing career, but also her life was almost snatched away when the bonny bitch was just a pup.

“When she was about 10 months old she got really sick and her temperature kept up over the 40 mark and she was vomiting. Then she stopped eating. She was taken to the vet and she stayed there and was placed on the drip. Her blood tests came back and they were all over the place. It wasn’t good and it was showing a kidney infection, but the vets weren’t sure whether it was the cause or a side effect of being so sick”.

“She stayed there for about a week and she just fell away. I don’t think she was any more than 10 kilos- she was just a skeleton. I remember weighing her at one stage and she was around 29.5 kilos so she lost a lot of weight”.

“Things weren’t looking good but I told them to do everything that they could”.

It was looking grim for little Ruby. Luckily, she had Britton by her side when she may not have had much hope otherwise.

“I went in to see her and she was lying down but then she sat up a little bit. Ted (Humphries) just said ‘there’s not much we can do for her here’ and that ‘we could probably do more for her at home’”.

“He suggested that I take her home and just try feeding her and to do little things with her, so we did that”.

“After two or three days she still wasn’t eating at home and I was nearly going to take her back to the vets but then she just started eating. We had tried KFC chicken, yoghurts- every food you could think of and she just wouldn’t eat it. It was actually ham that started her eating. Ted said to let her have as much as she wants and after about a month you could start to see a difference”.

Once she started improving there was no stopping Ruby. After a few months, Britton was able to nurture her back to full health.

“She started gaining a little bit of weight and we kept feeding her up. Then we started to let her free gallop around a little bit”.

“I just did that for a long time and when she was about 13-14 months, maybe a bit before, I took her back and got blood tests done, just to make sure everything was alright and to make sure it was ok to put her into work and start breaking her in”.

“It was all good and I broke her in myself. I put her up Appin a few times and she went first look and then I took her to Thirlmere. She started running times, not fast times, but times that said that she might make it”.

Named Survived for obvious reasons, Ruby defied the odds when she made it to the racetrack. Britton, who has handled and assisted with top performers for Ken and Mary Wright for over a decade, admitted that it was an overwhelming feeling the night that Survived broke her maiden.

“I’ve helped Ken and Mary with their racing dogs for nearly 13 years. I was there the night that Edie (Beauchamp) won the Easter Egg and when Eifella won the Derby. But, when Ruby won her first race, that win went straight to number one”.

“To see her win after everything she has been through was very special”.

Survived went on to score twice more before she was sidelined by injury in May this year. After some time to recuperate, and plenty of TLC, Survived returned to the track last Wednesday and scored an emphatic victory at Bulli.

Drawn well in box two, the daughter of Magic Sprite and She’s So Pretty bounced straight to the front of the field and was able to hold out Miss Thunder by one and a half lengths in 22.90s.

Survived will be aiming to make it two in a row tomorrow night when she returns to Bulli to contest the second race on the card. Drawn ideally in box three, Survived looks a live chance of notching up her fifth victory at her 20th career start.

For Britton, it is just rewarding to see her pride and joy on the racetrack.

“My goal was just to win one race with her and I did that so anything after that is a bonus. Hopefully she can stay safe and sound and we can win a few more races with her. Then I will probably look at breeding a litter with her”.

“She is just so special. Ken says she isn’t my racing greyhound and that she is my pet”.

“She has a big heart that’s for sure!”

While Survived may never go on to win group races or set track records, she is a star in her own right. It is truly inspirational to see such a courageous little chaser return from sickness to succeed on the track. It is equally inspiring to see such a strong bond between a trainer and their greyhound and it goes to prove that the power of love can go a long way. 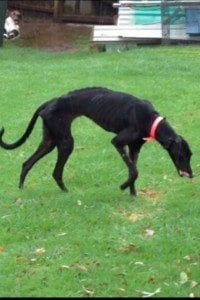 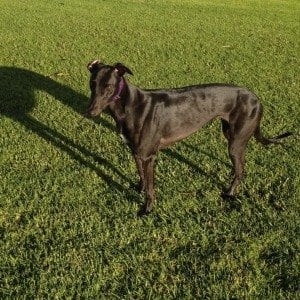 Fantastic story! I am doing the same with one of mine, and just want her to win a maiden. Anything else is gravy. I don’t care how long it takes after all that my 2 year old has been through.

Fantastic story! I am doing the same with one of mine, and just want her to win a maiden. Anything else is gravy. I don’t care how long it takes after all that my 2 year old has been through.