TWO NSW trainers have been left heartbroken after a suspected attack on their property left one of their greyhound pups with a broken leg.

Warren and Sonia (pictured with her son Jasper) Kempshall believe they have been targeted by an anti-racing protester who illegally trespassed on their 26 acre property near Grafton.

The woman, who cannot be named due to a current Police investigation, is alleged to have interfered with the Kempshall’s animals and to have made threats against their daughter, Caitlan.

Sonia, an ex-police officer, said an array of peculiar things had happened over the weeks prior to the incident, including strange vehicles entering their property and the taps to the family’s water tanks being turned on, resulting in flooding to their land.

However, things escalated to an all new level when Warren and Sonia went to the track last Thursday, leaving their 18-year-old daughter Caitlan at home.

“Caitlan called me at the track. She had been inside watching a movie when she heard all the dogs barking. She then looked out her bedroom window and she saw a lady feeding the dogs something, “ Sonia recalled.

“She went out there and the lady was trying to pick our pups up, so she yelled out to ask her what she was doing.

“The woman told her ‘I am looking for my cat, you have my cat here’. Caitlan told her we didn’t have her cat.

“She offered to take her around to help her look for her cat, but then the woman started getting aggressive.

“She has made accusations about us being killers – the lady was screaming at Caitlan saying that ‘you are killers’.

“Apparently we are not the first and we won’t be the last to be targeted. She said ‘all you killers will go down.’”

Caitlan took photos of the woman before returning inside to call the police.

“Caitlan rang the next door neighbours who helped her lock the gate. While she was waiting for the Police she was looking out of our kitchen area and the lady pulled back into our driveway and sat there watching what was going on.”

“Later that day we noticed the bottom clip on the fence had been opened. We locked it back up.”

After completing a police report the Kempshall’s were hoping that things would get back to normal but, less than 48 hours later, tragedy struck.

“On the Friday we (Warren & Sonia) went out to dinner and Caitlan stayed home because she was getting picked up later by her boyfriend.

“She was getting dressed when she thought she heard her boyfriend pull up because all the dogs started going off, but when she checked he wasn’t there.

“We came home that night and there was probably only half an hour or an hour between when Caitlan left and we got back. 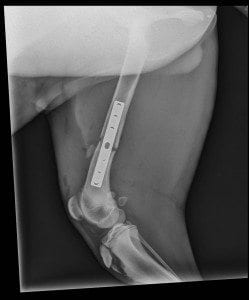 “The next morning we got up to go down to the dog shed and we could hear whimpering.

“We went over and we found Ace, one of our puppies, cowered over against a fence.

“I picked him up and I noticed his leg wasn’t sitting right so Warren took him into the vets.”

Sonia was unsure how the pup had escaped from his yard and after doing a check of the fencing it was discovered that a gate had been opened.

“While Warren was gone I decided to check the fence line to see where he may have gotten out and the bottom gate was ajar.

“We go through the yards every day and every afternoon to make sure everyone is there and you physically have to pull down and push out (the gate) and I have it that way so the pups cant run into it and knock it open.”

The Kempshall’s now believe that all the events are connected.

“It may be coincidental, but to me it seems very unlikely because she is threatening to do these things and the next minute a dog is out and its leg is snapped in half.

“We cant say it was definitely her, but it just seems very coincidental that in the six years we have never had this problem, then she turns up.” 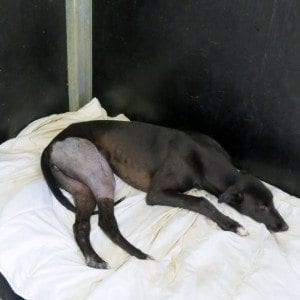 Contrary to the beliefs of many anti-racing protestors, the Kempshall’s have finally brought Ace home after a lengthy stay at the vets, dedicated to his recovery despite it being unlikely that he will ever make the track.

“Unlike what they all (anti racing activists) think, we didn’t knock him on the head and put him in a pit down the back… but these are the assumptions they have in their heads.

“They think every trainer must have some kind of pit and that we kill every dog that is not good enough.

“Thats not true, thats not greyhound people. We invest a lot of time, money, love and dedication to our animals.”

Australian Racing Greyhound has attempted to contact the NSW Police Force for comment, but they had not responded at the time of publishing.

Nice attempt at a smear campaign but its a little too obvious..