The Board of Greyhound Racing NSW (GRNSW) has officially acknowledged four clubs for their overall performance during the 2007/08 financial year.

In a result that was a replica of the previous financial year, Dapto and Casino in the TAB sector, along with Kempsey and Taree in the Non-TAB sector have today been recognised as the outstanding performers for the financial year just passed. The recognition is based on club performance against the GRNSW operating standard benchmarks.

In making the announcement GRNSW Chairman Professor Percy Allan AM said it was notable this year that performance across all clubs had generally improved which was a credit to everyone involved.

“Once again our clubs have worked as hard as possible to put on the show each week and at the same time continually improve their operating performance. The work of our dedicated club administrators, staff and volunteers must be acknowledged as without them the industry simply would not survive,” Professor Allan said.

“At the same time we must congratulate Dapto, Casino, Kempsey and Taree for their ongoing level of performance. Publicly recognising the high performance of clubs shows the industry the quality of the work being done by clubs and encourages future performance.

“For all four clubs to continue to achieve at the highest level for the second year running is a fine achievement. In the case of both Dapto and Kempsey it is now three years in succession, which is an outstanding effort.”

GRNSW collects performance data from all clubs through the internet based Clubs Secure system. In order to objectively compare the performance of all clubs, GRNSW ranked clubs against their results on five financial benchmarks and three racing benchmarks (with clubs that failed to achieve the minimum standard on any benchmark excluded from consideration).

The benchmarks analysed are:

Definitions for the financial ratios and results for the best performing clubs compared with their
respective operating standard benchmarks are shown below. 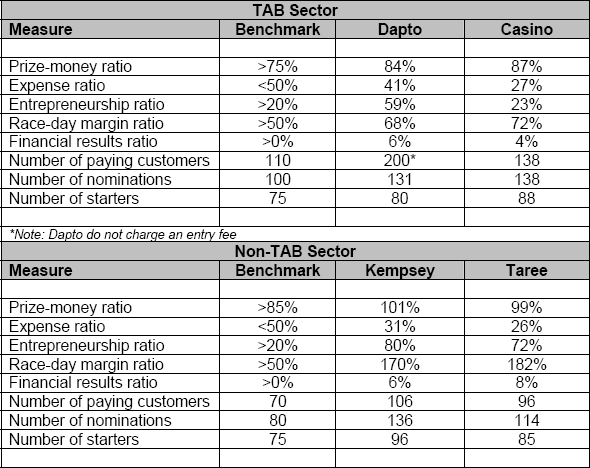