The Anne Foley trained Marlow Man finally lived up to his enormous promise on Monday night at Wentworth Park, scoring an emphatic victory in a sprint series heat, clocking a slick 29.82 over the 520 metres.

The son of Lochinvar Marlow and Gembaz had shown plenty of potential early in his career at Maitland, posting a hot 22.44 run in November last year at just his seventh start.

That victory was his last prior to Monday night with an array of injuries keeping him from putting his best paws forward on the track.

“He started off with a bang and we had high hopes for him, but these things are sent to try you and you have to just keep going”, Foley said.

“It took him eleven months to win another race. He pulled a toenail right out and that took a couple of months to heal and then he was ripped apart in a yard accident.”

Anne and her husband Barry, who train from their residential property in Maitland, showed great faith in their black speedster and he now looks set to repay them for the love and care shown to him during his recuperation.

Foley was delighted with the win and time but said she always knew that Marlow Man had enough ability to develop into a handy city-class performer.

“Earlier in his career, his style was to jump steady and to then burst away. It has taken a long time to get him back to where he was at the start.”

Affectionately named Bobby after Anne’s close friend Bob Brown, Marlow Man is not only a highly exciting chaser, he is also a much loved companion of eight-year-old Zac Shoesmith.

Zac, whose parents are family friends of Anne and Barry, was given a share in Marlow Man as a pup and he now races under the ownership of the ‘Our Boy Zac’ syndicate. It’s a certainty that there was nobody cheering louder on Monday evening than the youngster from his Heddon Greta home.”

“I gave Zac a share in Bobby for his sixth birthday and my hope when I gave it to him was that the dog would win some races. He went over $10,000 on (Monday) night so Zac has now won over $2,500. We are going on a cruise next February now because of Bobby”, Anne explained.

“Naturally enough he is too young to have a license and he couldn’t be a registered owner. The way around it was to call it the ‘Our Boy Zac’ Syndicate, it puts Zac’s name in the race book and that’s all he ever wanted to see.”

Anne says that each and every race that Marlow Man wins is special to her because of the joy it brings to young Zac, who suffers from haemophilia.

“With his haemophilia it gives him an interest in life. His illness prevents him from playing sport, so this is his sport.”

“He is absolutely devoted to Bobby. He doesn’t even talk about the other dogs in our yards, it is just all Bobby.”

It has been a tough year for the Foley’s who lost their outstanding youngster Zac Marlow at Richmond in February. While it has taken a while, things now appear to be looking up for Anne and Barry who recently celebrated their 25th wedding anniversary.

“Even though it has been a long time in-between drinks it has been well worth the wait and he (Marlow Man) has given us so much joy. We are hoping the best is yet to come.”

Marlow Man will head back to Wentworth Park this Friday for the Sprint Series final where he has drawn box seven. It will be a tough assignment for him against proven performers Zipping Tarn, Knocka’s Return, Watto Lotto and Encapsulate, but Anne remains optimistic.

“He has box seven in the final. It’s a hard final, finals are always hard to win, but he doesn’t mind being out there. We are just hoping that all those little injuries are behind him now and he can kick on.”

Win, lose or draw on Friday, as long as ‘Bobby’ comes home safe, there will be a smile on the face faces of Anne, Barry and one special little boy.

“Every time you put him around you just hope nothing happens to the dog. You just know that excitement that Bobby gives him, he has made an eight-year-old boy’s dreams come true.” 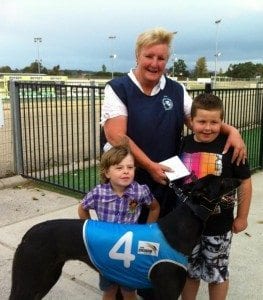