All eyes were on new Maitland’s new 400m track record holder Winsome Jacko in the Brodie Wells Electrical Future Stars Final, with the son of El Grand Senor and Ramblin’ Ruby starting from box six at the skinny odds of $2.30. Finn’s other runner Winsome Mission was also well supported by punters at $4.50.

Locally trained runner Gauge This was best away at box rise, with Christine Proctor’s Master Gee and Robert Green’s Lord Licrick positioning themselves nicely behind the leader heading around the turn. Finn’s three runners missed the jump and became entangled with inside runner Lord Gee, forcing them back through the field. It became a fierce battle upfront when Lord Licrick made his move on the outside, taking the lead halfway down the straight from Gauge This and Master Gee, who was making good ground. Heading for home it became a line of three runners, with Master Gee prevailing by a head over Lord Licrick in a smart time of 22.61. Early leader Gauge This finished a neck away in third position and Winsome Jacko flew home to run fourth. Scenes of jubilation erupted in the catching pen following the event, with Christine Proctor and husband Allan celebrating winning an event they’ve desired for many years.

“I’ve been trying to win this race for a long time so it’s a dream come true,” said a delighted Christine.

“It was so tight at the finish and I was so happy when I heard my dog had won, I couldn’t believe it.”

Master Gee impressed on debut in a heat of the series last week, clocking a brilliant time of 22.38. After coming up with box seven in the final, Proctor knew her charge was going to have to produce something special to beat a red hot field of chasers.

“When you’re up against so many good dogs and the new track record holder, I knew it was going to be a very hard race.”

The son of El Grand Senor and Oh Em Gee will now make his way to Bulli, where Proctor will work him through the grades and hopefully get some more pleasuring results.

“My plan at this stage is to take him to Bulli and see how he goes. I was very pleased with how he went in this series, so it will be good to see what he can do at other tracks.”

This series has produced some of the most promising pups in the state of New South Wales, with Melinda Finn’s new track record holder Winsome Jacko a star on the rise, whilst Master Gee, Lord Licrick and Gauge This are three greyhounds everyone should enter into their black books and keep a close eye on in the near future. 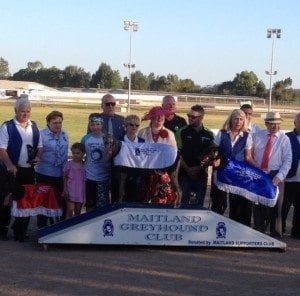