WHEN Denise Priest whelped five pups by Lochinvar Marlow out of Takeover Teddy back in September 2012, no one was sure if the runt of the litter would survive.

Now, just over three years later, that same pup has a one in eight shot of landing $100,000 when he contests the Group 1 Brisbane Cup at Albion Park on Thursday night.

Owned by Denise and trained by her son Terry, the pup races as Old Spice and he owes his life to the man who nurtured him from day one – Terry’s father, Terry Priest Snr.

“Old Spice was the runt of his litter and there were a couple of pups that had trouble feeding because Blackie (Takeover Teddy) wasn’t a very good mum – she liked to abandon them early.

“It didn’t look like he was going to make it back then and dad had to bottle feed him – you would see him out there before work with the little pup in his hand just making sure he was alright.

“From then on dad had a real affinity with him – we called him Mr T because Dad’s name was Terry – and you wouldn’t see a week go past where dad wasn’t out rolling around with him in the paddock the whole time he was growing up.

“It was obvious to him back then that there was something special about this pup – but to all of us he just looked like any other greyhound. He was adamant that he was going to turn out to be a good dog and as it turns out now he is in a Group 1 final so he was right.” 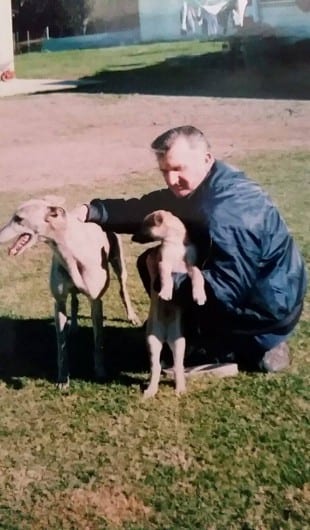 Old Spice and his litter mates were reared at the family property in Sawyers Gully, NSW, with Priest’s father (pictured right with some of his pups) playing the starring role in their upbringing.

They were one of many successful litters to be raised on the property which was converted into a greyhound farm when purchased by Terry and his parents over 15 years ago.

“I was made redundant by BHP in 1999 and we were living in Mayfield and I was training four dogs out of a house there.

“I asked dad if he would go halves in a farm with me because I couldn’t really afford it on my own and he jumped at the opportunity – he didn’t think twice.

“Within a few years mum and dad had relocated to a farm at Sawyers Gully and I bought a house with my wife down the road.

“He didn’t have the patience to train – he wanted to have them racing all the time – so after a lot of arguing we found his role was looking after the pups and getting in there with them, loving them right through from whelping stage until they were ready to go to the breakers.

“You would often find that he would be out there in the paddocks with them, throwing balls, wrestling with them – he was just really attached to the pups and it was something that all the pups enjoyed too – they all just seemed to respond to him – they loved him.

“It was going to be his retirement – he had everything planned – he was going to retire from the glass industry and put all his time into the pups with mum.”

Unfortunately, as fate would have it, those plans never came to fruition, with Terry Priest Snr. sadly passing away due to complications following a work accident two year ago.

“We didn’t expect it. We thought he was in hospital with a broken leg and that he would be back home soon enough where we would be pushing him around in a wheelchair on the farm until he was well enough to get back in with his pups,” Priest said.

“There was a time after he passed away where we considered getting out of the dogs. There was a lot of pressure from mum’s side of the family to give it away – but there was no way mum was leaving the farm.

“She is a stubborn old girl and she was adamant that the farm was where she was going to spend her retirement with dad – and she has still got his ashes there at the farm with her.”

‘Mr T’ and his litter mates were just 11 months old when Terry Snr. passed away, but when the time came to name the 29 kilogram speedster, Priest says there was no hesitation to name him in honour of his father.

“We sat around the table trying to think of what to call him. We thought of Glass Man and Glazier – but then mum suggested Old Spice… as soon as she said that we knew it was perfect because everyone of us used to chip him about it – he always wore it.”

Old Spice has now won nine of 31 starts, including four of his last six appearances. Priest says that while it took him a while to find his feet on the race track, he always thought he had ability.

“I found the breed are late maturers so I purposely held him back and let him come through slowly until he hit three years of age, before starting to put the pressure on him to see just how far he could step up.

“A few starts ago I resumed him at Maitland in a race won by Sandave Prince in a flying 25.03 – but no one seemed to see the black dog which got knocked back to last and flew home, making up about 14 lengths to finish right on their heels.

“That dog was Old Spice and that was the day something clicked for me and told me that he was something special.”

That run was so special that Priest started planning an assault on the Brisbane Cup series, with his plans reinforced following two successive victories at Wentworth Park in 29.94 and 30.19.

Despite his strong form going into the series, Priest said he still had plenty of knockers when he decided to head north for the feature.

“I had quite a few people telling me that he wasn’t up to the class and telling me I should have just taken him back to Wenty – but dad always said to me if you never have a crack you will never know – and those words were ringing in my head leading up to the series.”

The critics were silenced last week when Old Spice exploded from the boxes in his Brisbane Cup heat, charging straight to the early lead and going on to score emphatically in 29.76 – the second fastest time of the night.

Priest said that he was flooded with emotions following the win and couldn’t wait to speak to his mum back home in the Hunter Valley.

“I had to get away from everyone after he won, so I went over into the trotting stables at the track and I rang mum and we had a good cry to each other on the phone – in memory of dad – and then I composed myself and went back inside.

“Mum and I shared a moment together that was very, very special and that will stay with me for the rest of my life.”

Surprisingly, Old Spice is $8.50 with Bet365 to take out the final, despite holding the fastest first section going into the event and being drawn favourably in box two.

However, Priest isn’t worried about being one of the underdogs and plans on enjoying the week leading up to the race while staying locally with his mates Reg and Brett Hazelgrove.

“I am very lucky to have some good friends in the Hazelgroves up here who are letting me stay with them for the week and the dog is very comfortable here.

“I wanted to fly mum up for the final but she was adamant that she wanted to watch the race with dad – so she will be back in the Hunter and will have some friends over at the house and dad’s ashes will be sitting on the lounge right next to her.

“A win in this race wouldn’t just be for dad though – it is also for the Hunter Valley and for all the battlers out there.

“It is for all the people out there that get up early in the morning, do the dogs, go to work and who may struggle financially at times. It’s for all the people that breed their own dogs and who keep the slow ones just because they love them – it’s for the little bloke.

“We don’t expect to win – we are the underdog, the battlers – we are the only non professional trainers in the race – but he is jumping out of his skin and he is going into the race as good as he went into the heats.

“No matter what happens I will know that I gave him every possible chance and I left no stone unturned because he is a very happy dog at the moment – hopefully that shows in the final.”

Win, lose or draw Priest says he and his mum are just thrilled to be racing in one of the country’s biggest features, made even more special by the fact that his father will be racing with the dog with each and every stride.

“No matter what happens in the final, we are already over the moon,” he said.

“I feel a massive connection to dad through this dog – he played a massive role in the first 11 months of his life and it is still there.

“When I talk to him it is like he knows – and it might sound funny but when I talk to the dog it is like I am talking to my dad – I see dad when I look at him, he is a part of him.

“Every time I put him in the boxes I tell him ‘this one is for pop’ and I whisper in his ear ‘come back to me mate’ and I will be doing that again on Thursday night.

“I have never been a great believer, but the way he has improved each time I have asked him to step up – something is happening from above and I definitely believe now that dad is up there giving him a hand.”