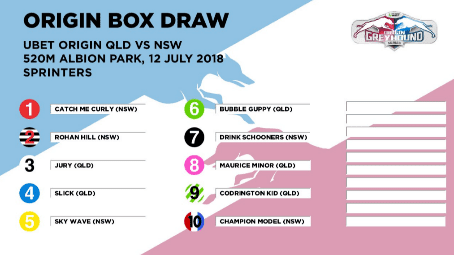 Queensland’s champion sprinter Jury was installed a $2.90 favourite to win the first UBET Origin Sprint at Albion Park on Thursday night, where Queensland and New South Wales’ best greyhounds will go head-to-head in a three-race series.

Excitement continues to build ahead of the inaugural series in Brisbane, with the box draw conducted by QRIC Stewards at the iconic Breakfast Creek Hotel, and live streamed across UBET and Racing Queensland.

In the potentially series-deciding one-vs-one match race, Queensland’s It’s Dyllan drew Box 3, with NSW speedster Two Times Twice in Box 1. When asked whether It’s Dyllan would have the speed to win the match race, trainer Peter Wilson said: “Of course!”

“He ran very good (in the Winter Cup) but this is a different concept with two greyhounds. I think (Two Times Twice) is a very good dog and will be very hard to beat, but we will be there trying our best,” he said.

UBET’s Gerard Daffy said bookmakers had been working overtime to get markets out for all three races early on Monday, with plenty of options for all types of punters.

“There has been huge interest in this. We’ve had the series betting open now for several weeks and I was staggered by the amount of interest in it. It’s going to get even hotter now.”

Australian Racing Greyhound will providefree greyhound ratings preview tips of the three promo races on Thursday for those interested in betting. 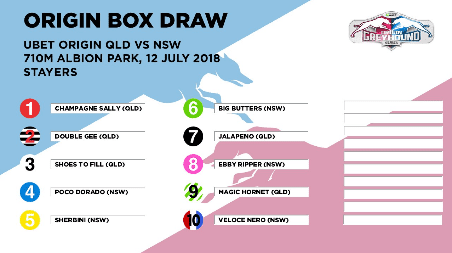 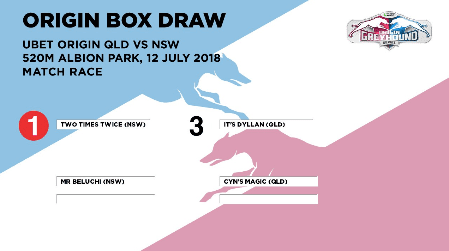