Rookie Rebel has tonight been announced as one of the inaugural 36 inductees in to the Victorian Greyhound Racing Hall Of Fame.

Not only did Rookie Rebel hold track records at two of Australia’s premier racetracks – Sandown Park [555 yards] and Wentworth Park [580 yards] – but his uncanny field sense enabled him to win elite level races such as the Australian Cup, the Melbourne Cup and the Hobart Thousand.

In an era where ‘the punt’ was of paramount importance, Rookie Rebel raced on 67 occasions for 36 wins and 23 placings.

In those days greyhounds seemed to change hands for all sorts of reasons, and Rookie Rebel himself had several different trainers including Les Merry, who recently spoke about the former champion.

“There aren’t many people still around that were fortunate enough to see Rookie Rebel race. The Australian Cup, the Melbourne Cup and the Hobart Thousand were all run over varied distances on varied tracks and he managed to handle them all”, recalled 83-yearold Merry.

Unfortunately for Merry, he only trained Rookie Rebel for a short period early on in his career, and the circumstances which saw the star enter and depart his kennel were interesting to say the least. 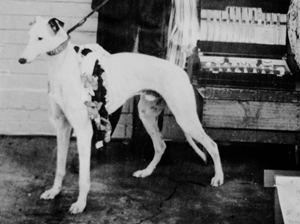 “A guy named Peter had been betting huge for a number of weeks when he approached [Rookie Rebel’s owner] Stan Cleverly and asked him if he had any greyhounds for sale. Stan said he could buy Rookie Rebel from him, who at the time was a promising young dog and a last start winner at Albury, for 1,500 pounds [this was a time when 800 pounds bought you a house]”, Merry recalled.

“Peter said he could only afford to spend 750 pounds. So Stan said he could buy him for 750 pounds on the proviso that he paid him 250 pounds after each of his next three wins…and the deal was done. Pete then asked Stan who he thought he should get to train Rookie Rebel, and Stan suggested I train him.”

And so Merry went about trying to win his first race with Rookie Rebel.

“I was lucky enough to find a couple of injuries he was carrying straight away. I got him right and we had him ready for a win in White City”, Merry said.

“Peter didn’t want me to race him at White City though, and only agreed to let this happen when Stan said he’d lend Peter 200 pounds to back him and another dog we were taking to the races that night. We were confident they’d both win, and they did, but Peter didn’t turn up. We couldn’t contact Peter for days, but we raced Rookie Rebel a second time expecting Peter to show, but again he was nowhere to be seen”, he added.

It wasn’t long after Rookie Rebel’s second run for Merry that the Melbourne trainer was forced to say his goodbyes to the speedster.

“I was living in Abbotsford with my parents in the house I’m living in now and I heard a knock at the door. It was the police and standing behind them was a young lady, who was Peter’s wife. Peter was waiting in the street and wouldn’t come to the door”, Merry said.

“The police said I was training Peter’s dog and that he wanted him back. I asked the police to look at the contract that Stan got Peter to sign which stated he pay Stan 250 pounds after each of his first three wins. They went away and came back two hours later with 200 pounds and took Rookie Rebel away from me”, Merry recalled sadly.

Merry continued to monitor Rookie Rebel’s career from afar as he went on to win feature races and break track records. However, his fondness of the white and brindle greyhound remained.

“He was a lovely dog to handle and wanted to jump on you. I called him ‘Baldy’. I’m not sure why but I do remember he had a brindle patch over his eye”, Merry said.

Rookie Rebel was one of six pups to be named that were sired by Dream’s Image and Lady Janellen in 1954.

Rookie Rebel himself became a sire, producing only a handful of litters including one that boasted the 1961 Melbourne Cup winner Bybrae.