Of the many outstanding Victorian greyhound administrators to have graced the sport, Roy Maidment is the granddaddy of them all.

Maidment’s first association with greyhound racing dates back to 1890, with his greatest achievements including the significant part he played in the formation of the Australian & New Zealand Greyhound Association [ANZGA] and being the founder of the sport’s all important Australian Greyhound Stud Book in 1940.

Prior to entering greyhound administration, Maidment spent numerous years involved as an owner, trainer and breeder.

He first entered greyhound administration when becoming a member of the sport’s controlling body, the National Coursing Association [NCA] sometime prior to the 1914 commencement of World War 1. 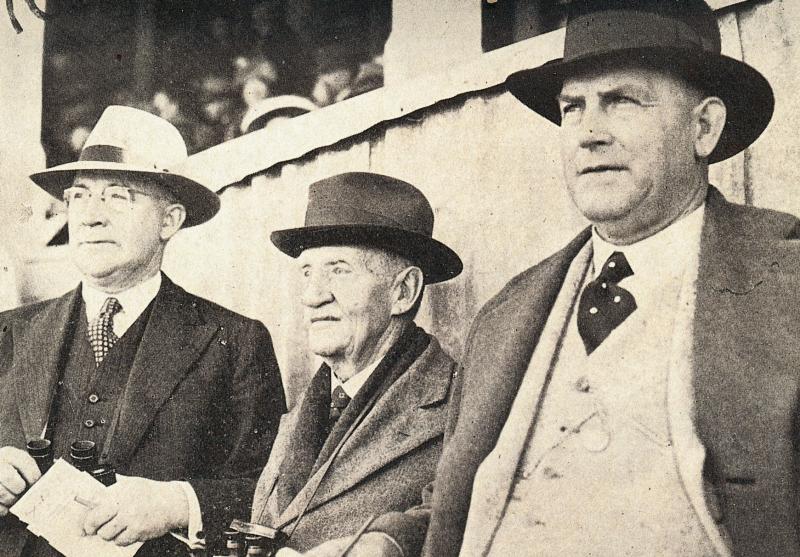 Maidment went on to spend many decades at the forefront of greyhound administration in various lead roles with the NCA right up until 1973, and also spent time with the Greyhound Racing Control Board [GRCB] during its formative period.

Les Merry, 83, who has been training greyhounds since 1941, remembers visiting NCA headquarters to apply for his trainer’s license when just 14 years of age.

“I was a couple of weeks shy of my 15th birthday and was filling in an application form for my trainer’s license. Roy Maidment, who was quite tall and around 60 years old then, looked down his glasses over the counter at me and asked in a deep voice ‘How old are you son?’”, Merry said.

“I said ‘I turned 18 last week Mr. Maidment’. He knew I was lying, but he grinned and walked away.”

Merry, who got his trainer’s license that day, developed an appreciation for Maidment both as a person and as an administrator despite their significant age gap.

“He was a lovely man…a real gentleman. You couldn’t meet a nicer type of person. He never spoke with any sarcasm and was well respected by everyone in greyhound racing”, Merry said.

As President of the NCA for several decades, Maidment was almost a one man band.

“For a long time while he worked at the NCA he was the only full-timer. He had a young lady, possibly a junior, who did some typing and filing for him, while his wife, who was a lot younger than he was, worked there two afternoons a week”, Merry said.

When proprietary [privatised] racing ceased in the 1950s with the government taking control of the sport, the GRCB was formed and became the new controlling body. Maidment’s knowledge and hard work was instrumental during this period and, with proprietary clubs having to be compensated financially, Roy personally lodged a significant amount of funds in the bank to enable the [GRCB] Board to operate an account to pay them [the sport did not receive government funding or benefit from TAB operations in those days].

“The government asked Roy to run the GRCB in the early stages. He told me that they had 19 people working at the control board in Sydney, yet he and the two girls ran the GRCB and the NCA [in Victoria] on their own for several weeks – and did a competent job – until the government appointed board members”, Merry said.

The Maidment-inspired production of the Australian Greyhound Stud Book was for decades considered the bible of greyhound breeding, particularly prior to the days of computers.

“Roy started the stud book off on his own. It came as a result of his idea and his own effort. He was interested in the breeding side of things and wanted to keep records”, Merry explained.

Fellow Hall of Fame ‘Pioneer’ George Schofield, a successful breeder and stud master from the 1960s, recently stated… “No one knows what they would have had to go through if it wasn’t for the Stud Books. They were a bible and the industry owes a lot to Roy Maidment. He was a great greyhound man who was always approachable. You could always talk to him”, the 91-year-old said.

Incidentally, the Sandown Greyhound Racing Club runs an annual Group 2 distance event called the Maidment Memorial. As such, one could be excused for assuming that Maidment had a direct association with the Sandown Club, however he didn’t. This demonstrates the level of regard in which Roy Maidment is held in thanks to his outstanding contribution to the entire greyhound
administration.