Returns to South Australian greyhound participants will increase for the eighth consecutive year, after the GRSA Board approved a 4.13% increase to total returns in the 2014/15 financial year.

The increase will add an additional $254,000 to industry returns, which incorporates stakemoney, trainers rebate, SA bred bonuses and the popular breeders’ rebate scheme. Total industry returns will exceed $6.4 million in the next racing season.

GRSA Chairman Michael Fabbro said the announcement was extremely positive for the local industry, especially considering GRSA is committed to a number of important capital works projects over the coming years.

“The GRSA Board recognises the importance of year-on-year increases to participants, notwithstanding the fact that the industry will be investing in much-needed facility upgrades over the next few years” Fabbro said.

CEO Matt Corby added “The last eight years have been a period of sustained growth for greyhound racing in South Australia. The increases to next year’s returns forms part of a five year plan for GRSA to exceed $7 million in total industry returns by 2016/17.” 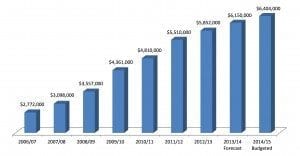