THIS week’s review of litters selected from the Victorian Litter Registrations list for the week ending June 8 starts with a nice litter of 10 pups by the ill-fated Group 1 winner, Above All (July 2012 Magic Sprite x Kara Janx) who tragically died recently.

His racing career was tragically cut short after 33 starts which resulted in 15 wins and eight placings, which earned connections $323,360 in stakes, and included wins in the 2014 Group 1 Hobart 1000, 2015 Group 1 Silver Chief and the Group 2 Cranbourne Cup.

Jailbreak Lass was born in Canada and is from a very good litter which included Billy Club, Kat Zapper, Rumor Has It and Rush N’ Whacker, and with the exception of Kat Zapper who appears not to have raced, the others were all winners.

I am not sure if any of the litter are for sale, but would suggest there will be enormous interest from prospective buyers, with future breeding mind, especially with seven bitches.

LONG time since we’ve had a litter come through by Bearabilty (March 1996 Credibility x Kissy Bear), whose dam is by New Tears x Ice Fire (Bowetzel x Misty Piper Lee) but there is one with nine pups on the list this week.

Beautifully bred, Credibility broke the Toowoomba 457m track record (25.22), won the 1997 Shane Taylor Memorial Maiden and 1998 Toowoomba Derby, winning 12 of his first 13 starts before dropping a back muscle in his 14th and final start.

Miss Monaleen is from a litter which included Monaleen Comet, Monaleen Magic, Monaleen Melody, Star Of Monaleen and Windy O’Monaleen, with their dam’s only other litter on file, whelped in May 2014, by Ninja Jamie* producing Monaleen Deejay, Monaleen Mojo, Monaleen Monty, Monaleen Ned and Ninja Fighter. 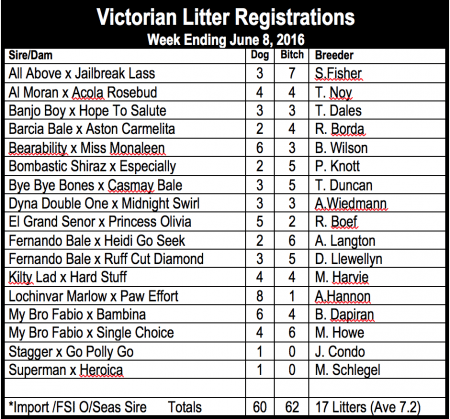 Especially is from a very handy litter which included Al Moran, Allez Bijou, Annopolis and Sign’s Of Lee, with their dam also having good winners on file from her two other litters, whelped in December 2009 by Where’s Pedro and April 2012 by Collision.

Casmay Bale is from a litter which included Dyna Andy, Dyna Billy, Dyna Lent, Dyna Ulna, Dyna Vank and Yakira Bale, with their dam also producing some good winners from her other litters, by Allan Harper, Collision and Turanza Bale.

OUR final litter for review from this week’s Victorian list is one of nine pups by successful NSW based sire Lochinvar Marlow (July 2007 Bombastic Shiraz x Sensation Lee).

She is from a handy litter, which included Bondtagel Boy, Dazzle Bond, Maestro Magoo, Moets Mate, Mr. Gold Finger and Walkabout Elley, with their dam also producing winners from her five other litters, by Brett Lee, Carnage, Collision, Over Flo and Tims Crow*.

She is a proven producer herself, with winners from her first two litters, whelped in June 2013 by Cool Effort, then May 2014 by Spring Gun. 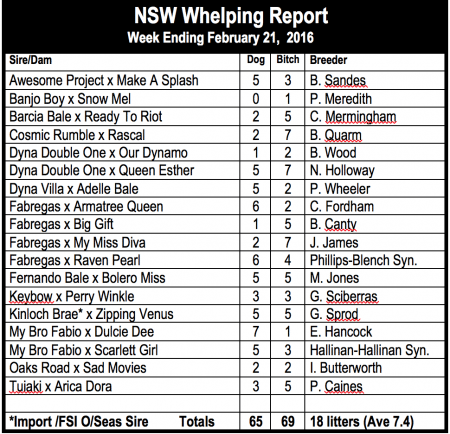 TURNING our attention to the NSW Whelping Report for the week ending February 21, our first litter selected for review, is one of eight pups by highly regarded stud prospect, Awesome Project (March 2011 Collision x Honour Phase).

She is from her dam’s second Big Daddy Cool litter, which included Brindle Fox, Brindle Rebel, Centre Four and Cool La Plume, after her first litter by him, whelped in February 2006 produced Billy Rubin, Charles Daniel, Cool Flight, Daddy La Plume, Royal Rocka, Sawtell Sam and Whizzer Watson, with winners on file from her two other litters, whelped in January 2004 by Token Prince and January 2008 by Elite State.

On the track, Make A Splash raced 34 times for one win and seven placings, winning over 400m at The Gardens (22.94), where she was also placed three times, and placed four times over 400m at Gosford.

She has one previous litter on file, three dogs and one bitch, whelped in January 2015 by Vee Man Vane, and there is certainly plenty to like about the pedigree of the well bred youngsters in this litter.

She is from a good litter which included Back Up Punk, Evil Punk, Good Odds Demon, Good Odds Devil, Hot Impact and Who De Punk, with their dam also producing winners from her four other litters, by Hallucinate, Magic Sprite, Spring Gun and Vapour Whirl.

She has one previous litter of her own on file, four dogs and two bitches, whelped in April 2015 by Fabregas so she certainly has some very well bred youngsters on the ground now.

She is already a proven producer, with all three named from her first litter, Elite Rascal, Nitro Rascal and Rumbling Rascal, whelped in October 2013 by Where’s Pedro, winning races.

She is from a litter which included Tricky Sid, Zipping Andy, Zipping Joe and Zipping Raffa, with their prolific producing dam also having winners on file from her five other litters, by Bit Chili, Malfoy, Mantra Lad, Smooth Fancy and Whisky Assassin, with a total of 37 named offspring on file from her six litters.

She has three named offspring on file, He’s All Power, Shez Slimline and Very Choosy, who were whelped in September 2024 by Jagger Swagger and who are all winners.

She is from her dam’s first Surf Lorian litter, which included, Botany Fresh, Lorian Rip, Miranda Molly, Sicilian Wave, Surfabella and Three For Ten, then in addition to a second Surf Lorian litter, whelped in November 2009, their dam also has litters on file by Bit Chili and Elite State.

She is a proven brood bitch with some good winners from her four previous litters on file, whelped in May 2012 by Cosmic Rumble, February 2013 by El Grand Senor, October 2013 by Magic Sprite and March 2015 by Bekim Bale. 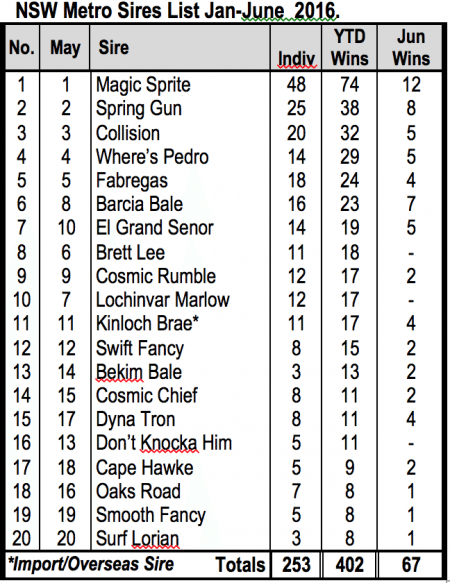 He now leads the list at the halfway point of the year, with 74 wins from 48 individual winners, just short of double the 38 wins of his nearest rival, Spring Gun who has 38 wins, followed by Collision with 32 wins, Where’s Pedro 29 wins and Fabregas 24 wins, completing the top five, at the end of June.

Just outside the Top 20 at the end of June with 7 wins each are Turanza Bale and Glen Gallon, followed on 6 wins by Nitro Burst, then 5 wins each by College Causeway*, Dyna Lachlan, Fear Zafonic*, Big Daddy Cool, Mogambo and Miagi.

Winners for the top three June sires at Wentworth Park, and their dams were as follows:

Coursing this week is at Longwood where the feature event on the program is the 2016 Longwood Cup, which will be supported by the Bert Clark Memorial and the usual events for Maidens, Bitches and dog puppies.

Longwood also has a two day meeting scheduled for Saturday July 23 and Sunday July 24, which will feature the running of the 2016 Victoria Derby and 2016 Victoria Oaks, plus supporting events on the Sunday.

WENDY CAN’T RUN (White & blue bitch, September 2014 Cosmic Rumble x Dewana Savanna) Impressive first up winner over 520m at Cranbourne on June 19 leading all the way from box five, winning by six lengths in 30.98 before 4.75 lengths fourth there on June 29 from box six. Had the same box when up in class and well beaten over 515m at Sandown on July 3. She can run so look for her in something easier, or at least better drawn shortly.

ANOTHER HOPE (Black bitch, March 2014 Swift Fancy x Drama Queen). Ten starts for one win and four placings. Third over 311m at Cranbourne June 22, beaten 5.5 lengths, then fifth 300m Healesville June 26, before big step up in distance and class when encouraging third over 515m at Sandown on July 3 in the race won by Dewana Express (29.92), Looks likely type to win better races so keep an eye out for her.

MUSTANG SAMMY (Black dog, July 2014 Barcia Bale x Strawberry Rose). Eight starts for three wins and four placings. Followed smart successive wins over 311m at Cranbourne, June 1 and 10, 17.87 and 17.97 before stepping up in distance and class when third over 515m at Sandown on July 3, beaten 4.73 lengths in the race won by the Jason Thompson trained What Planet (29.87). Has heaps of ability and looks like he will run the 515 metres with a bit more experience. Follow up.