Their dam also produced winners from her other two litters on file, whelped in October 2012 by Where’s Pedro and November 2013 by Brett Lee.

Reverberate proved herself a top class stayer on WA tracks, with her overall race record reading, 83 starts for 24 wins, 23 seconds and 17 thirds.

He is a half brother to Shakey Jakey and according to my breeding records, he has had offspring race from four litters to date, whelped in October 2013 from Midnight Movie, December 13 from Illegal Lengths, January 2014 from Fancy Jaffa and January 2014 by Bailey’s Express and his name has burst into the spotlight in the last couple of months through the efforts of the very smart sprinter Buck Forty, and the brilliant but still learning, sprinter/stayer Burn One Down, both from the Fancy Jaffa litter.

Certainly plenty to like about the potential of this litter, Peter, which I imagine will generate plenty of interest as more of the offspring of this promising sire hit the tracks. 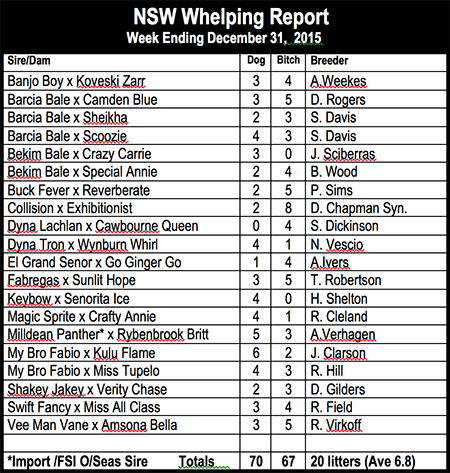 NEXT we have a litter of ten pups, registered by Darryl Chapman, from Whiteman’s Creek, by Collision (August 2001 Awesome Assassin x Rumble Spirit) which should create plenty of interest amongst potential buyers with future breeding in mind.

She is from a handy litter which included, Abbreviate, Anthony’s Boy, Lacey Lois, Super Princess, Super’s Son, Total Blonde and Unbound, with their dam’s only other listed litter, whelped in March 2014 producing Conductress, Samba King and Samba Law.

She is from a litter which included Alfresco Frenchy, French Cake, She’s A Sunlit, Sunlit Joe, Sinlit Leo and Sunlit Road, with their dam also producing winners from her other litters, by Legs Ahoy, Placard and Stately Bird.

She has winners on file from her first two litters, whelped in April 2012 by Knocka Norris and July 2013 by Magic Sprite so it will be interesting to keep an eye on this litter.

Their dam, Flick The Switch only has one other litter on file with named offspring, whelped in September 2010 by Premier Fantasy* which produced, Adelina Pines, Cheergirl, Colossal Fantasy and Turbo Switch. 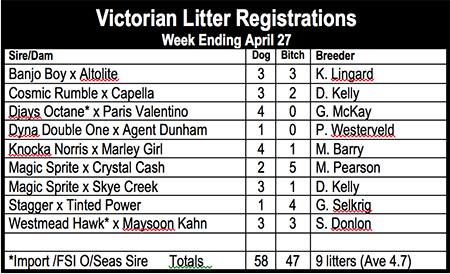 She is from a litter which included Alpha Centauri, Bella Choice, Magic Mantra, Polkadot Flyer and Silver Fresco, with their dam having only other named offspring on file, Milburn Gold, who was whelped in March 2013 by El Grand Senor.

She is from her dam’s first litter by Knocka Norris, which included Alleviate, Don’t Knocka Him, Knocka Down, Little Miss Hap, Powers Back, Scissor Queen and Surf Sticka.

Crystal Cash has two named offspring on file, Emilia Cash and Little Written, who were whelped in February 2014 by Cosmic Chief, but this really is a beautifully bred litter, bred along successful lines, so keep an eye out for her offspring in the future.

She is from a litter which included Bogie Dawn, Bogie High, Herman, Sunset Sky, Velocity High and Without Wizard, with their dam, Bogie Skye, also producing some very good winners from her four other litters, whelped in March 2009 and June 2011 by Collision, June 2012 by College Causeway* and April 2014 by Bekim Bale.

She has one named offspring on file, Stellar Creek, from her first litter, whelped in May 2014 by Golden Easter Egg winner Cosmic Rumble.

She is from a litter which included Acoustic Kahn, Avatar Honey, Billy’s Girl, Genghis Kahn, Media Kahn and Zulu Kahn, with their dam also producing winners from each of her two other litters, whelped in March 2012 by Premier Fantasy* and October 2013 by Magic Sprite.

She certainly did plenty of travelling during her time on the track but showed her versatility with a 50% overall strike rate, combined with her impressive pedigree and that of Westmead Hawk*, this litter should do pretty well Sheila, good luck with it.

STUD Service figures released by GRNSW for the month of January showed a total of 47 services were registered for the month, by 30 different sires, with those with multiple services being Dyna Double One with 5, Fernando Bale 4, Bekim Bale, Dyna Villa and Fabregas 3 each, Barcia Bale, Cosmic Rumble, Don’t Knocka Him and Swift Fancy with two each.

Coursing off to a great start

COURSING in Victoria is still alive and very well in fact with strong 12 event programs being conducted every fortnight from May through until the end of August on coursing tracks at Benalla, Lang Lang, and Longwood, with three clubs still participating, Melton, Weribee and the Victoria Coursing Clubs still participating without having their own current facilities operating.

Australian Racing Greyhound will be featuring regular coursing results throughout the season in Talking Breeding with the co-operation of new NCA Secretary Sue Delaney.

This year’s coursing started with two additional picnic meetings (Catch on to Coursing), at Longwood and Lang Lang, mainly for newcomers wanting to see what happens, with these meetings only running two courses in each event, with no prizemoney, but trophies provided by generous club sponsors.

The first of the season’s feature events was run at Lang Lang on May 15, with the club hosting the traditional Werribee Cup meeting for the Werribee Club, who currently do not have their own facility.

The main event on the program, for the best 8 all aged greyhounds nominated was won by Keith Hellmuth’s Flash Riot (Barcia Bale x Raya Riot) who defeated the David Dawson trained, Baines Park in the final.

The main support event was the JN Smith all Aged stake, which was won by the Andrew Paraskevis trained Better Than This (Knocka Norris x Father Of Mine) who defeated the David Dawson trained Go Go Danni.

The Werribee Club named the Noel Ryan 1 win limit stake in honour of former Coursing stalwart Noel Ryan, who passed away just a few weeks ago, and this was won by David Chiu’s Sun Choice (Magic Sprite x Lovely Time) who was too good for Murray Hehir’s Rambo’s Party in the final.

During the season Talking Breeding will be providing our own, exclusive, regular Coursing Sires and Brood Bitch Lists, detailing the Sires and Dams of all Winners, with respective sires and brood bitches going on to the list with minimum of one winner, with the two figures for each sire or dam, representing wins and runners ups. 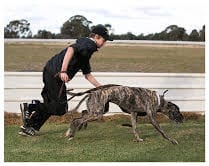 If you you’ve never had a look at Coursing, set your Sat Nav for McDonalds Track, Lang Lang, or use your good old fashioned Melway and take the trip to Lang Lang, first course 10.00am, catering is great and the bar is operating.
Thanks to Sue Delaney for the great photo of 18 year old NCA slipper, Michael Webb safely dispatching a pair at the recent, season opening, Benalla All Maiden meeting.