With Heat The Plate’s sire, Slater (Surf Lorian x Wipeout) winning the 2007 Golden Easter Egg, and her dam, My Girl Harriet’s sire, Light Of Fire (New Tears x Centrefire) winning the 1994 Melbourne Cup, the pedigree of these well bred youngsters should ensure they are keenly sought after, especially the six bitches, with future breeding in mind.

Heat The Plate is from a litter of four named, which included, I’m Quick, Slater’s Me Dad and South Curyl, with their dam also producing winners from her other litters, by El Galo, Elite State, Primo Uno, Pure Octane and Surf Lorian, however she only had a total of 19 named offspring from her six litters.

She has two previous litters on file, five dogs and one bitch, by Nitro Burst, whelped in April 2013, then four dogs and five bitches, by Dyna Lachlan, whelped in March 2014, so she certainly has some very well bred youngsters on the ground for prospective buyers with future breeding in mind to follow.

Look for the sun 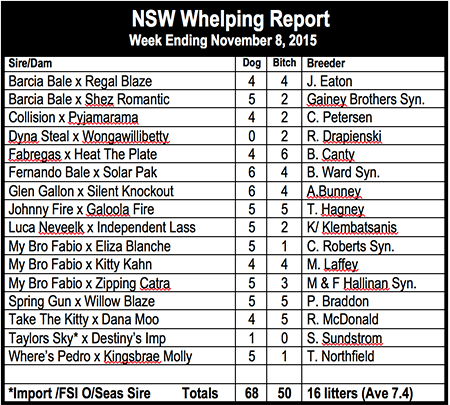 NEXT we have another litter of 10 pups, this time by the recently retired, Group 1 champion, millionaire, Fernando Bale (March 2013 Kelsos Fusileer* x Chloe Allen).

The six dogs and four bitches were registered by the B. Ward syndicate from Chipping Norton and are from the beautifully bred bitch, Solar Pak (January 2012 Mogambo x Tifi) whose very good producing dam is by Bombastic Shiraz x Chili Berger (Elle’s Commando x Alice Dooley).

Solar Pak is from a litter of four named, which included, Shine, Someone Tifi and Tough Amigo, with their dam producing good winners from each of her three other litters, whelped in May 2010 by Collision, March 2011 by Where’s Pedro, then a repeat mating to collision, producing good litter of nine pups named, in December 2012.

Another litter of ten

He is from his dam’s only litter, which included, Arundel, Dust Coupe, Velocity Zap, Velocity Zip and Velocity Zoom.

She is from a litter which included, Basalt Jab, Lucy Gaga, Perro Diablo, Salty Kebab, Sheza Bunney and Sure Destiny, with their dam’s only other litter, whelped in September 2011, by Cosmic Rumble, having three named, Harry Booker, Jenny Booker and Tweed Secret.

Silent Knockout only raced 13 times for three wins and three placings, winning three times over 420m at Tweed Heads (23.60) with one placing and two placings over 411m at Casino.

She is a proven producer, from two previous litters, the first, whelped in March 2012 by El Grand Senor producing Nat’s Angel, Smalltime, You Telam Emily, You Telam Lewie and Yopu Telam Troy, then a December 2013 litter by Cape Hawke producing Emily Dude, Galaxy Knockout, Range Hawke, You Telam Jacko and To Telam Viv.

OUR final litter for review from the NSW Whelping Report this week is yet another litter of ten pups, this time by the beautifully bred, successful sire, Spring Gun (June 2009 Bombastic Shiraz x Ready For Rain).

She is from a litter of five named, which included, Goodsman, Mariska Girl, Topsey Lady and Yarnie. With their dam also producing some handy winners from her other litters, whelped in March 2006 by Big Daddy Cool and June 2007 by Whisky Assassin, with just the one pup named from a March 2009 litter by Over Flo, giving her a total of 16 named offspring from her four litters.

She has one previous litter on file, whelped in April 2014, by El Grand Senor, with six named, All A Blaze, Hopes A Chance, Little Willow, Marbos Magic, Susie Willow and Willows Secret, who are not two years old yet and have won more than 20 races between them already. 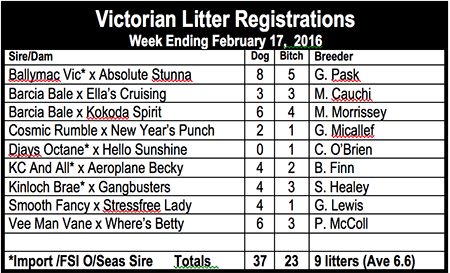 The eight dogs and five bitches were registered by the Four Frothy’s syndicate manager, Glenn Pask, and are from the well bred, lightly raced bitch, Absolute Stunna (October 2010 Bombastic Shiraz x Regal Blaze) whose dam is by Pure Octane x Sound Lee (Brett Lee x Sound The Alarm) and worth recalling, Sound The Alarm is by the successful Irish import Barneys Alarm* x Skyline Miss (Hua x Fitzroy Lass) so the pedigree of these well bred youngsters goes on forever.

Absolute Stunna raced 11 times for three wins and five placings, winning twice over 460m at Warragul (26.15) and also over 520m at Cranbourne (31.00) where she was also placed, and placed four times over 460m at Geelong.

Interesting to note, her first litter, whelped in November 2013, by Kinloch Brae has been a great success already, with seven named offspring, Absolute Silence, Bells Are Ringing, Blazin Bomber, Kinloch Stunna, Miss Kadia, Ring The Bell and Stunning Success having won more than 50 races between them, which should add even further to the interest in her second litter.

What makes this litter even more interesting is the fact that Ella’s Crusing returned to racing after whelping this litter and was a great winner at The Meadows last Saturday night, from box seven, over 600m, defeating Jayco Bale and Emily Jane, running 34.56.

The win was her seventh from 27 starts to date, her third since whelping the litter and she has also been placed ten times, which will further add to the interest in this litter.

Kokoda Spirit has one previous litter on file, six dogs and three bitches, whelped in December 2014 by Collision.

SEVEN pups in our next litter for review, by the successful Irish sire, Kinloch Brae* (August 2005 Craigie Mo Town x Greys Free Style) who we have already discussed this week.

Her breeding career is off to a good start, with her first litter, whelped in November 2013, by Bekim Bale, producing Kokoda Dawn, Kokoda Eclipse, Kokoda Moon, Kokoda Storm and Kokoda Sunrise, with all but Kokoda Dawn winning races, who has been placed three times from 14 starts.

She is from a 100% winning litter which included Big Dude, Black Dodge, Lolo Jones, Proven Bourbon and Proven Mayhem, with their dam also producing winners from three other litters, whelped in May 2008 by Pure Octane, August 2010 by Path To Power and June 2011 by High Earner, then she has just the one named from a March 2012 litter by Bekim Bale, Stringer Bell who raced 33 times for four placings.

BREEDING rankings for the two months ended February 29 , released by AGRA (Australian Greyhound Racing Association), are based on a points system applied to all group races on a sliding scale from first to eighth.

STUD Service figures released by GRNSW last week for the month of November showed newcomer, My Bro Fabio was the most popular sire with NSW breeders for the month with 11 services, followed by Magic Sprite with 4, El Grand Senor and Fabregas with 3 each, then Banjo Boy, Barcia Bale, Cosmic Rumble, KC And All*, Keybow, Nitro Burst, Oaks Road, Shakey Jakey and Spring Gun, all with 2 each completing the list of sires with multiple services for the month.

Looking at the year to date figures, for the eleven months January to November 30, Fabregas heads the list with 77 services, followed by Barcia Bale with 64, Cosmic Rumble 48, Spring Gun 38, Shakey Jakey 38, Bekim Bale and My Bro Fabio 26 each, Banjo Boy 22, Magic Sprite 18, El Grand Senor and Lochinvar Marlow 16 each, Collision 15, Glen Gallon 12, Cape Hawke 11, then Djays Octane*, Don’t Knocka Him, Dyna Tron and Tomac with 10 each, completing the list of sires in double figures.