AMIDST all the turmoil created by the NSW Premier’s decision last week to end greyhound racing in June next year, we still have litters being whelped and registered, with the biggest problem now being the future of these well bred youngsters from the litters we are about to review.

With the controversial decision announced by the Premier still to go before the Parliament, and the courts as well judging by the number of angry social media comments, groups formed, petitions prepared, and having said all that I, think it is fair to say, the fight is just beginning. Who knows where and when it will end, there are thousands of greyhound owners, trainers, breeders, breakers and rearers around the country who still have dogs to attend to, and for now we must give them our full attention.

Our review of litters selected from the NSW Whelping Report for the week ending February 29 begins with a nice litter of ten pups by the 2014 Melbourne Cup winner, Dyna Villa (October 2014 Collision x Roxio Bale).

She is from a litter of four named, which included Elly, Ember Attack and Firetrail, with their dam’s only other litter on file, with seven named, whelped in March 2008, by Big Daddy Cool). 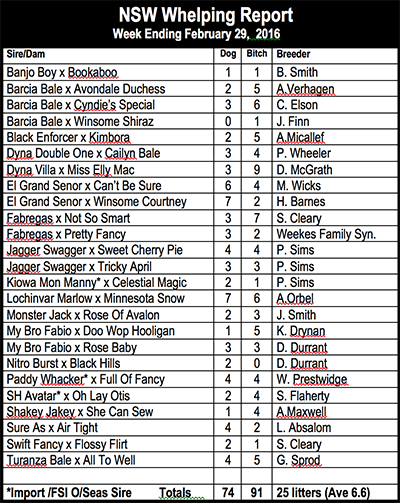 She is from a litter which included Black Hustler, Blitz’em Bond, Final Answer and Shine The Light, with their dam’s only other litter on file, one of seven named, whelped in September 2006 by Most Awesome.

Can’t Be Sure was lightly raced, with just eight starts from which she has the good record of four wins and one placing, winning four times over 520 metres at Bathurst (29.73) where she did most of her racing, with her placing over 453 metres at Cowra.

She has one previous litter on file, four dogs and five bitches, whelped in February 2015, by yet another Melbourne Cup winner, Dyna Tron (February 2009 Collision x Gold Rush Bale) who won the race in 2011.

She is from a litter of nine named, which included Winsome Annie, Winsome Benji, Winsome Henry, Winsome Jake9, Winsome Max, Winsome Mitch, Winsome Tessie and Winsome Tommy, with their dam also producing winners from her two other litters, whelped in December 2010 by Where’s Pedro and April 2013 by El Grand Señor.

A dozen for Marlow

She is from a litter which included Kikem Silver, Kikem Wish, Minnesota Miss, and She’s All Noble, with their dam also having winners on file from six other litters, by Collision, Elite State, Lilli Pilli Lad (twice) Spring Gun and Where’s Pedro.

Fallen Zorro was the 2008 Sandown Greyhound Of The Year, winning the Group 2 McKenna Memorial and the Group 2 Bold Trease, as well as the Group 3 Australian Stayers and Group 3 Hume Cup, and she also set a track record over 642 metres at Cannington.

The four dogs and four bitches in the litter are from the beautifully bred bitch, Full Of Fancy (October 2011 Smooth Fancy x Prodigal Child), whose dam is by Brett Lee x Fancy Candy (Light Of Fire x Miss Fancy) and as we have mentioned a couple of times in recent weeks, Miss Fancy is by the successful import Barneys Alarm* x Gay’s Fancy.

Full Of Fancy is from a litter which included, Cawbourne Impact, Cawbourne Power, Cawbourne Tip, Chloe’s Prodigy and Molly’s Child, with their dam also having winners on file from two other litters, whelped in April 2010 by Collision and March 2014 by Elite State.

On the track she only raced twice, both times over 327 metres at Cowra where she was unplaced, but she certainly has the pedigree to expect her to be a successful brood bitch.

The four dogs and five bitches are from the beautifully bred bitch, All To Well (May 2012 Collision x Kiacatoo Pearl), whose dam is by History Lesson x Naughty Thoughts (Go Wild Teddy x Ready To Rain).

TURNING our attention to the Victorian Litter Registrations list for the week ending June 14, our first litter for review is one of six pups by the beautifully bred, stud prospec, Banjo Boy (April 2011 Vee Man Vane x Off Springer).

Night Dream is from her dam’s only litter, which included Groovy Tiger, Hurricane Josh, Kokos and Ultimate Rattler, and judging by her pedigree, I would suggest these well bred youngsters are well worth following. 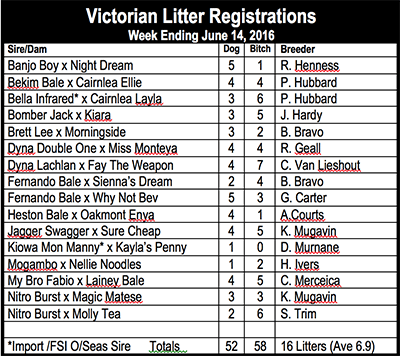 She is from a litter of seven named, which included Cairnlea Ethan, Cairnlea Layla, Cairnlea Peter, Kolora Mogambo, Kolora Morpheus and Kolora Princess, with their dam’s only two other named offspring, Cairnlea Claire and Roxy Mac, whelped in January 2010 by Where’s Pedro.

She has one previous litter on file, with seven dogs and five bitches, whelped in April 2015, by successful, now deceased international sire, Premier Fantasy*.

She has one previous litter on file, with just the one dog and one bitch pup, whelped in July 2015 by leading Victorian Metropolitan sire , Barcia Bale.

Interesting to note that Bella Infrared* is now 14th on the Victorian Metropolitan Sires list at the end of June, with 22 wins and 19 placings, from four individual winners from the one litter, Demon Bale 8 wins, Felton Bale 6 wins, Eren Bale 5 and Helma Bale 3 wins, who are out of a March 2014 litter, from Fyna Bale (October 2009 Bartrim Bale x Amelia Bale) who is a litter sister to Bekim Bale.

NEXT we have a nice litter of eleven pups by the 2010 Australian Cup winner, Dyna Lachlan (February 2007 Go Wild Teddy x Benden Flex).

Fay The Weapon is from a litter of two named, which included Kay The Weapon, and their dam also produced winners from both of her other litters, whelped in April 2009 by Mogambo and April 2010 by Spiral Nikita*. 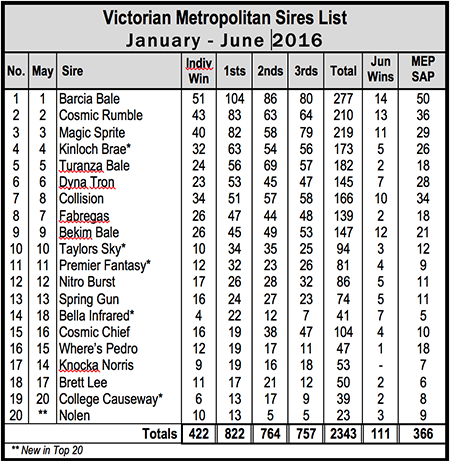 She is from a litter of four named, which included Behan, Modra and Warunda Magic, with their dam also producing some good winners from both of her other litters, whelped in January 2013 by Meticulous and March 2014 by Kinloch Brae*.

On the track she raced ten times for the excellent record of five wins and four placings, winning three times over 450 metres at Warrnambool (25.55) and twice over 480 metres at Horsham (27.21), with one placing noted over 515 metres at Sandown.

She has one previous litter on file, also three dogs and three bitches, whelped in March 2015, by 2012 National Sprint Championship winner Fabregas, so she certainly has some well bred youngsters on the ground.

She is from a litter which included Granitoid, Patch Of Violets, Pumpkin Eyes and Pyrogenic, with their dam having winners on file from her three other litters, whelped in January 2007 by Pure Octane, December 2008 by Where’s Pedro, and March 2010 by El Galo.

She has two previous litters on file, four named from an April 2010 litter by Bond, then a 100% winning litter of eight named, whelped in November 2013 by Fabregas, then she has a July 2014 litter with just the one dog pup, by Westmead Osprey*, and a litter of three dogs and seven bitches, whelped in April 2015 by Spring Gun.

He now leads with 104 wins, 21 clear of Cosmic Rumble who has 83 wins, just one ahead of top NSW sire Magic Sprite, who now has 82 wins, Irish based Kinloch Brae* with 63 wins, and Turanza Bale, now based in China, who has 56 wins.

Looking at the top five after deducting Wednesday and Sunday provincial stake meetings, the result is extremely interesting with Barcia Bale leading with 54 wins, followed by Magic Sprite with 53 wins, Cosmic Rumble with 47 wins, Turanza Bale with 38 wins and Kinloch Brae* with 37 wins.

Just outside the top 20 at the end of June, with 12 wins each are Swift Fancy and Dyna Lachlan, followed on 11 wins each by Stagger, Oaks Road and Razldazl George*, then with 10 wins each, Lochinvar Marlow, Kilty Lad, David Bale, Bobby Boucheau and Razldazl Jayfkay*.

Winners for the top three June sires, and their dams were as follows:

COURSING was at Longwood last weekend on a cold winter Sunday and despite the forecast of rain, it did not arrive until late afternoon and the twelve event program was able to proceed in good coursing conditions.

The main event on the program was the 2016 Longwood Cup which saw victory in the final for the John Taylor trained, I’ve Got Wings (Knocka Norris x Time And Money) who was too good for Ribacola (Symmetry x She Can Sal), trained by Paul Ellul.

The main support event was the Bert Clark Memorial and here the winner was Halina (Fabregas x Nalima) trained by Trevor Anlezark, who proved too good for the Peter Knott trained, Galmist (Barcia Bale x Motorette).

KEEP UP (Black bitch, March 2014 Premier Fantasy* x Keep Cool), Seven starts for two placings including fourth at The Meadows (MEP) 525 metres July 6, before last start second over 515 metres at Sandown (SAP) on July 10, beaten seven lengths in the race won by Kumbia Lass (29.80). Trained at Heathcote by the astute Michael Chilcott and should be long before she chalks up her first win.

AUGUSTUS DAGLOOP (Black Dog, March 2014 Swift Fancy x Drama Queen), Ten starts for two wins and five placings, including a win over 350 metres at Healesville and second over 395 metres at Traralgon before he stepped up to 515 metres at Sandown (SAP) on July 10, beaten 4.8 lengths in the race won by Avatar Hunter (30.21). Trained at Devon Meadows by Justin Nolan and looks a good prospect.

UNAPOLAGETIC ( Black bitch, February 2014 Go Wild Teddy x Tocsin) Another from Justin Nolan’s kennel, who had seven starts for two wins at Sandown (SAP) April 7 and July 3, before last start fourth there, from box five on July 10, beaten ten lengths in the race won by Dundee Calypso (29.82). Looks likely to take the next step up in grade with a bit more experience.
Mailbag

Got a question on any of our sires and brood bitch lists, maybe on Coursing, or want to send us news on a litter you’ve just bred, or any greyhound racing related question, simply email me at [email protected] We are particularly interested in hearing from Queensland breeders about their litters, after we have still not received any response from the authority there to our request for information.