Further to today’s earlier article questioning the implementation of the NSW zone racing strategy, Greyhound Racing NSW (GRNSW) have now announced a major change to the zones. Richmond will now be merged in to the same zone as Bulli, Dapto and Goulburn.

Neither GRNSW nor GWIC addressed the legitimacy of the weekend’s winners that raced out of zone, and AustralianRacingGreyhound.com is now aware of a steward’s report highlighting an out of zone winner that has since been amended with no explanation. GRNSW have not addressed rumours that the New England and Hunter zones were to be merged.

In an after-hours statement while thanking participants for their cooperation under the restricted racing conditions during the COVID-19 pandemic, GRNSW CEO Tony Mestrov said:

“Firstly, let me assure all participants that GRNSW and GWIC are working together to ensure there is every chance for racing to continue.

“I have previously stated that this is a survival plan during an incredibly difficult time, and the regional zoning program was quickly established to meet the strictest biosecurity standards and create the safest possible environment to race.

“I understand there are personal challenges for participants but let me say again that the alternatives to this plan are far worse.

“I congratulate everyone for adhering to the new measures including social distancing and for showing the resilience the industry is renowned for.

“Behind the scenes we are doing all we can to ensure the safest possible way to continue racing.

“If we need to make more changes in order to keep racing, we will do so.”

Mestrov did not address the numerous examples of greyhounds racing out of zone.

GRNSW have reformed the zones from seven to six, with Richmond being added to the South Coast region of Bulli, Dapto and Goulburn.

According to GRNSW “the decision has been made to meet the critical need to ensure racing is conducted in line with best practice biosecurity protocols that are designed protect our staff and participants”.

Trainers in the South Coast region will from today be able to nominate and race at any or all of the four tracks to allow best health, safety, welfare and integrity practices to continue.

Extra race meetings will be scheduled at all four venues.

GRNSW and GWIC are in discussions about the provision of extra race meetings within the six regions, and an announcement on this will be made in the next few days. There are currently 10 tracks fully equipped to facilitate greyhound racing in NSW under the interim plan as 70% of venues remain closed.

GRNSW have also advised that racing in the Wagga and Gunnedah regions will continue under the previously set-out criteria at this time, with nominations for these meetings only being accepted from participants in those regions. This will be further reviewed as the racing schedule is developed.

GRNSW did not address the rumours that the New England zone was merging with the Hunter zone. Many New England trainers have nominated for races at The Gardens in the Hunter zone after a rumour on Facebook suggested a GWIC steward had said the regions would merge. Three races at The Gardens meeting on Saturday, 28th March 2020 were won by greyhounds racing out of zone.

In a troubling further development, a steward’s report from The Gardens meeting on Friday, 27th March 2020 which specifically referenced the rumoured merging of the New England and Hunter zones has now been amended. 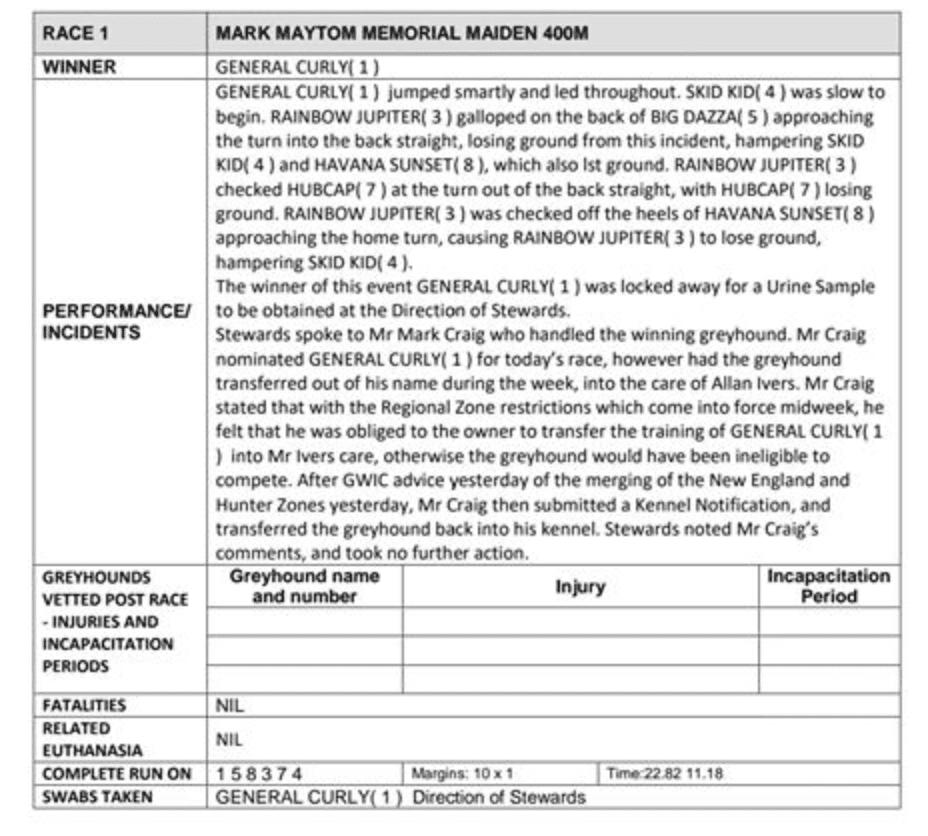 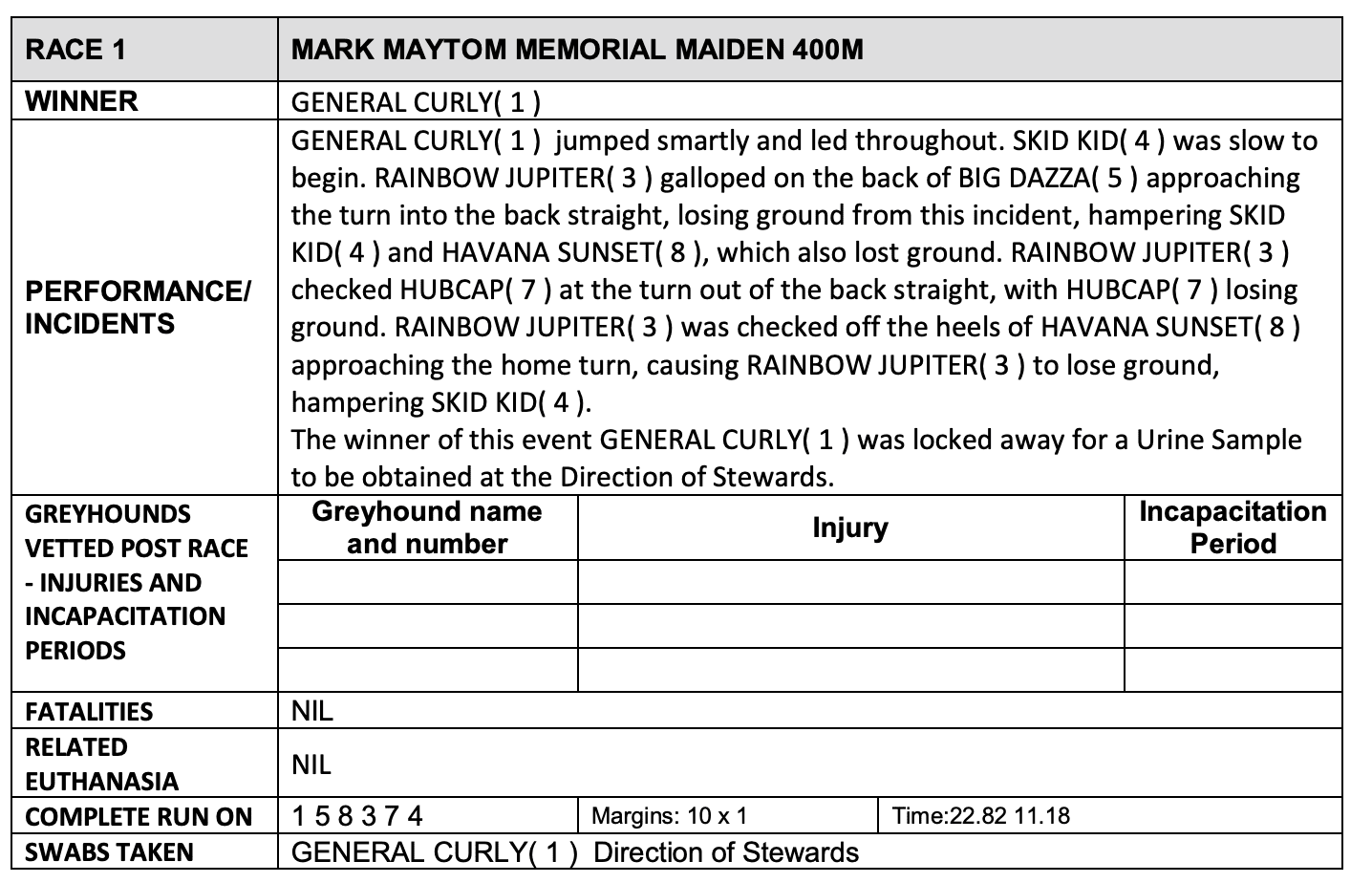 The original steward’s report seemed to confirm GWIC understood the two zones would be merged.

The amended steward’s report makes no reference to the merger, nor the eligibility of the winner General Curly to start in the race.

According the original steward’s report, trainer Mark Craig had transferred the training of General Curly to Alan Ivers. Craig handled the winning greyhound at the meeting and said that he had “transferred the greyhound back” to his own kennel. As of today, General Curly is still officially in the kennel of Ivers, who trains from Swan Bay in the Hunter zone. Craig’s registered kennel address is in Tamworth, in the New England zone.

Notwithstanding the very fluid trainer and kennel returns which have occurred in this instance, AustralianRacingGreyhound.com wonders under what circumstances can GWIC legitimately amend or remove parts of an official steward’s report? Shouldn’t an official report made from the perspective and atmosphere of the day and time in question not remain intact? Surely if information is later deleted from a steward’s report, then some kind of explanation should be forthcoming?

Neither GRNSW nor GWIC have announced what action, if any, will be taken against GWIC staff or trainers that have allowed greyhounds to race out of zone incorrectly. There appeared to be nine winners from just three meetings over the weekend that were racing out of zone, and countless other starters.

AustralianRacingGreyhoud.com have asked both GRNSW and GWIC for comment on the ineligible winners, the “missing” zone merge, and the removed section of the steward’s report.