AMERICAN Monster will face the biggest test of his career on Friday night when he contests a heat of the Group 1 Melbourne Cup (515m) at Sandown Park.

The blue dog has drawn box three in the last heat of the night (race 10) and will meet a stellar field including the likes of Fanta Bale (box one), Weekend Binge (box two), Aqua Cheetah (box four) and Tripum (box seven).

Despite facing a tough task, having a runner engaged in the $420,000 series is an enormous thrill for American Monster’s 24-year-old trainer Ashlee Terry and her partner, Andrew Paraskevas.

“We’ve never had a dog fast enough to even think about contesting a race like the Melbourne Cup, so it’s nice to have a runner in the heats,” Terry told Australian Racing Greyhound.

“Whether he is good enough to make the final, I don’t know, but at least he is in there with a chance.”

American Monster, $61 to win the series with Sportsbet, has been in terrific form recently, having run second in the Group 2 Shepparton Cup (450m) behind Aston Bolero four starts back.

All up, the son of Knocka Norris and Father Of Mine has won 19 of his 40 career starts, including one from three over the track and trip at Sandown.

While he comes up against a field including two group 1 winners this Friday, Terry remains cautiously optimistic about her greyhound’s chances in the race.

“At the moment he is probably at his best so he has just got to show everyone what he can do.

“If he gets out in front he can run very fast times, but unfortunately he has got a couple of bad racing habits because he can be tardy at the start and he likes to use a bit of the track.

“If he is able to time the start right this week, he is definitely in with a chance.”

Terry, who has been training with her partner Andrew and his father John for the past three and a half years, says it has always been her dream to be a greyhound trainer.

“My mum and dad both had dogs when I was growing up – I went to my first race meeting at Olympic Park back when I was three days’ old – and I was pretty much raised at the dog track.

“When I was 12 my dad passed away and my mum moved the dogs on, she just needed to focus on herself and the kids.

“Even though she stopped training, growing up that’s all I ever wanted to do, so I got a job at Healesville greyhounds and then a role working at a kennel.

“After a while I made the decision that I wanted to start training myself, it’s what I’ve wanted my whole life.

“Andrew and I have been training together for three and a half years. I moved to his property at Sale and then Andrew and his father decided to purchase a place in Cranbourne which is where we are now. 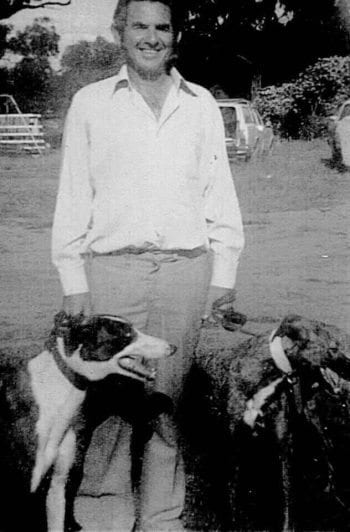 “It has taken a little while to get results – we are still learning how to train – so to get a dog like Stevie (American Monster) is amazing.”

Terry says it’s hard to describe how she would feel if American Monster is able to land a spot in the final of the Melbourne Cup.

“I couldn’t even explain it. We don’t expect anything from him because he has been drawn in a really difficult heat, but of course it would mean a lot to us to see him make the final, especially for Andrew and his dad.

“It’s not about the money, but to feel like we have made it as trainers. It is something every trainer dreams of doing so it would be life changing.”

Terry said it would also be special to achieve success in the sport which her father Keith (pictured) loved dearly before his passing.

“It is hard sometimes because I would love to be able to ring him for advice and just generally talk to him about the dogs.

“Luckily I have my mum and she is back involved in the dogs now – I probably drive her insane because they are all I ever talk about whereas dad would happily talk to me all day about them.

“I just hope dad can see what I am doing and is proud of what we have achieved.

“It’s a hard one, but to be honest all I have ever wanted to do was to achieve something I know would make him proud of me and I think this would.”

American Monster will jump from box three in race 10 this Friday night at Sandown Park, with the bunny to be set in motion at 10:08pm.

great couple of young ‘kids’ giving it their best daily.

seen the dog run many times and he sure has the speed,but his early box starts are a hindrance to him.can really motor when he opens,so I wish them well in their endeavours.

Its a pity that here in NSW we have a government that’s trying to destroy family units that love racing their Greyhounds ,I hope the people of Orange punish the NATS for supporting Baird & Grant ! Good Luck Andrew and Terry and  Stevie have a safe trip.