And in December 1963, Fairbairn Queen was bred with the immortal Black Top. In fact, she was the second brood matron Black Top served. 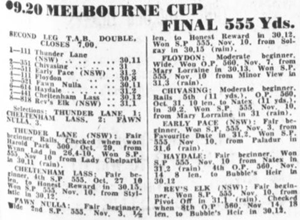 These events were instrumental in the Scurrah name being associated with a champion sprinter during the 1960s.

Under the expert training of Paul Hogan, Cheltenham Lass ensured her name would be preserved for posterity.

“She was an absolute champion, a dream greyhound,” Scurrah said.

“When Fawn Nulla ran her down in the 1967 Australian Cup, she was suffering from cataracts. It was the only time she was run down in a race and we immediately retired her.”

Hogan’s daughter, Sandra Reed of Drouin, says Lal Scurrah and her father had a great partnership.

“There was never any conflict… Lal was a true gentleman,” Sandra said.

“He left everything to dad, and would take his advice on what sires to use. 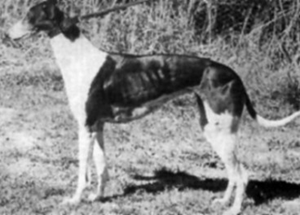 “Lal was so easy going, and he ‘took it on the chin’ when the kennel was having a bad trot.”

“She had a satin coat and epitomised health. It was like she’d had a bath in conditioner…

She had something special about her.

“However, she was very docile and relaxed. She didn’t have much personality.”

“We were in the ‘old stand’ at Sandown Park when she won the cup. The place was packed and I thought the whole stand was going to collapse, such was the crowd’s excitement as she crossed the line.

“We took the Melbourne Cup back to the Scurrahs residence and drank champagne out of it.”