GRV today released the names of another four of the 36 inductees – Chris Flint, Ken Carr, Henry Harrison & Lizrene. This brings the number of releases to six, with the remaining 30 inductees to be announced on July 12.

Henry Harrison’s greyhound racing passion dates back to the 1920s, initially as a typical punter and owner-breeder.

He witnessed his first Melbourne Cup, in the proprietary days of the sport, at Napier Park in 1927. And when the race shifted to Sandown Park in 1956, with the introduction of the tin hare, Harrison was a powerful force in developing its status.

Harrison was appointed to the Sandown Greyhound Racing Club committee in 1959 and elected chairman in 1964, a position he held for 23 years.

His son-in-law Geoff Dawson (the incumbent SGRC chairman, who was elected following Harrison’s retirement from the club’s directorate in 1987) recalls the first time he met a giant among men – and set eyes on his daughter Loretta, who later become his wife.

“I was a harness bookmaker’s runner at the Showgrounds in the early 1950s. I went around the back of the grandstand and Henry was there with his daughter Loretta. I thought ‘she’s not a bad sort’, so I kept going around the back to put some more bets on.”

Harrison’s greatest achievement, in Dawson’s opinion, was the negotiation of TAB coverage for greyhound racing through his powerful connections in the racing industry and with high ranking state politicians.

“He was extremely convincing, and I don’t think the SGRC would be here today without his influence,” Dawson said. 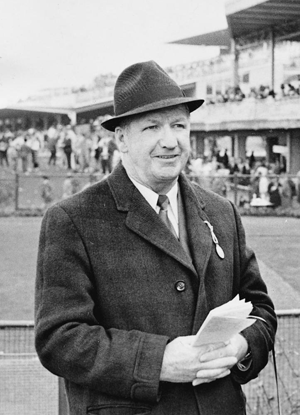 “He even purchased a thoroughbred from Sir Chester Manifold, just to speak to him about his main objective: getting the tote for the greyhounds.”

The patriarch of Sandown Park was an administrative chameleon – autocratic and a people’s man.

He was pro-Sandown GRC, much to the chagrin of the National Coursing Association of Victoria. But he was popular with many owners and trainers, and also loved standing on the terraces at the Port Melbourne Football Ground supporting his beloved “Borough” with the Painters and Dockers.

Harrison displayed political nous securing off-course TAB coverage on metropolitan greyhound racing in 1966 – a real watershed in the sport’s history. He was also at the SGRC helm during the introduction of computerised totalisator equipment in 1974, which generated exponential growth in on-course betting.

It’s ironic that Harrison owned a thriving business manufacturing toolboxes for tradesmen, as he was a “Mr Fixit” of the greyhound racing industry. His tools of the trade were political and business acumen.

He served for a short period as a Greyhound Racing Control Board member, where he was instrumental in many government changes to the sport.

Harrison also received a Centenary Medal for service to greyhound racing in Victoria. And he was a prominent owner and member of various associations in thoroughbred racing.

“He was instrumental in bringing out film stars and sporting celebrities for the Melbourne Cup – including Christopher George, Robert Stack, Elke Sommer, and even Greg Norman,” Dawson said.

“The movie stars would come back to my farm on the weekend for a ‘Melbourne Cup after party’. It was also a family reunion / picnic day, a real social event with around 250 people.”

Plans to build the new grandstand at Sandown Park were conceived in 1982 and came to fruition in 1986 with the $4m construction of a predominantly glass structure, the design of which substantially influenced the architecture of the current Caulfield racecourse grandstand.

The Henry Harrison Grandstand is testimony to this father figure’s enormous contribution to the SGRC and the greyhound industry in general.

“Henry was a very fair and genuine person… He loved his family; he was a real honourable man,” Dawson said.

Henry Harrison passed away peacefully in his sleep on Sunday September 18, 2005 – aged 91.