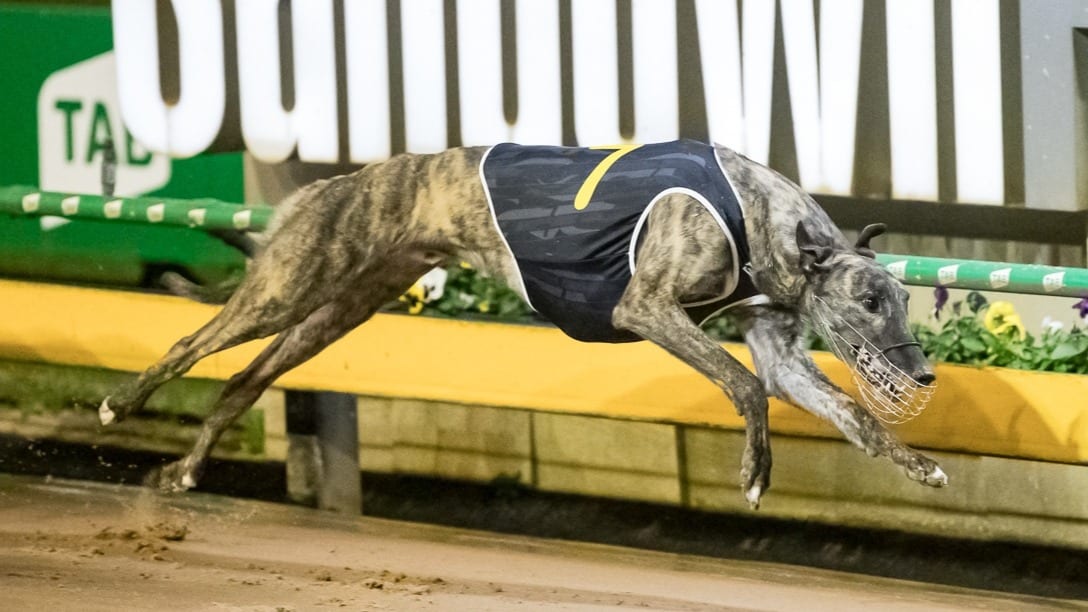 Everything about Dyna Virion is big.

Trained by the biggest trainer in Victoria, Andrea Dailly, and weighing in at a gargantuan 41.9kg, the hulking son of KC And All and Darya Bale filled every piece of his extra-large racing vest when he lined up in the final race on the card.

He was last away from box seven and trailed the field with a lap to go, but he stuck fast to the rail to take full advantage of the run when it presented, powering his way through to land the winner’s cheque. Kiss Me Nicki, who led for all but the final strides of the 515m event, weighed in almost 17kg lighter.

“He’s a beautiful dog, like a big puppy really just very playful,” said Andrea’s husband Tom, adding that his personality is as big as his frame.

“Oh he’s all personality, almost over the top sometimes to be honest. But in a good way he just likes to enjoy himself.”

Dyna Virion tipped the scales at 42.3kg when he made his debut in January two weeks shy of his second birthday and had reached 43.1kg by his 15th start in April. Dailly took some weight off him believing he had gotten too big, however soon had a change of heart.

“I thought he might race a little better with a bit of weight off but he didn’t look right so we decided to put it back on. He carried it OK earlier in his career, he’s just a naturally big dog – and he’s a good eater too!” he added with a laugh.

While many subscribe to the theory that bigger dogs are better suited to the bigger horseshoe style circuits, Dailly does not believe that applies to Dyna Virion, now a winner of four of his 25 career starts.

“He’s actually quit nimble for his size. He’s a bit tardy out of the boxes but that’s just his racing pattern. He handles Sandown and goes well at the Meadows too which is a little tighter and he’s railed quite well in a few of his wins so there’s no worries about him handling the turns.”

Clearly, size is in the genes. Dyna Virion’s dam Darya Bale good size herself consistently racing over 29kg throughout her 83 start career. The four dogs in this KC And All litter – her fourth litter – average 37kg each and the two females average 31kg with all six from the litter recording wins. Indeed, each of her litters have produced big dogs, including Immen Bale, Jumbo Bale and Giant Bale from her 2015 litter to 1997 Melbourne Cup winner Roanokee, each of which checked in north of 37kg through their career.

Records for the largest winner at Sandown Park are sketchy. Other large greyhounds that have won at the venue include the aptly named Hercules who tipped the scales at 40.6kg when he won in July 2005, while more recently, Dobre won at 40.1kg in December 2018.

To put his size in perspective, the average weight of TAB Melbourne Cup winning greyhounds since 1987 is just 32kg.