Dr Jim Gannon has tonight been announced as one of the inaugural 36 inductees in to the Victorian Greyhound Racing Hall Of Fame.

Born in 1930, James Richard Gannon graduated with the degree of Bachelor of Veterinary Science from the University of Queensland in 1952.

Being from a dairy farming background, he immediately returned to Queensland’s rural scene and established the first veterinary practice in the city of Maryborough.

Two years later, he moved further upcountry to the township of Monto where he again launched the first veterinary practice in that locality dealing with dairy and beef cattle.

Severe Queensland drought saw him visit Victoria “for a week, just for a change”, and it was decades later before he ever bothered to return.

After settling at Kew, it was not long before a thriving practice of four vets and nine nurses offered a seven-day service, from 8am to midnight every day – and many a greyhound trainer can testify to that!

So what started Dr Gannon with greyhounds?

“For the first two years at Kew, I worked almost exclusively, full-time, with horses (thoroughbred and harness),” he said.

“Then disaster struck, when a number of injections of tetanus antitoxin for various injuries sustained from horses caused a severe allergy to develop – in those days tetanus antitoxin was made from horse serum, and repeat doses produced allergic responses.

“That was the end of all further horse contact – so, naturally, the only other attractive racing animal athlete was the greyhound – and that’s how it all started.”

Following a busy decade at Kew and Richmond, with equally outstanding colleagues like John Murray, Phillip Kidd and Janene Kirschner, Dr Gannon was invited in the 1980s to reinvigorate the Sandown Veterinary Clinic, where he was a driving force behind the establishment of the Greyhound Adoption Program (GAP) in Victoria. 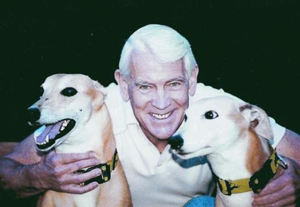 Then began an era of unparalleled affordable and dedicated veterinary service to the greyhound industry, supported by top vets such as Des Fegan, Peter Yore, Richard Healey, and a series of Sandown Cadetship graduates including Michelle Brooks, Chris Boemo and Steve Brown, just to mention a few.

Dr Gannon sees increasing the effectiveness and reach of the Greyhound Adoption Program as one of the major challenges ahead of the racing industry.

He also sees this as linked to the Responsible Breeding Taskforce (RBTF) program, which aims to control the breeding practices of greyhound owners through the registration process to ensure that only high quality sires and dams are used.

“This will produce a smaller number of better performing greyhounds,” he said. Dr Gannon dedicated his professional activities to two areas of interest: his veterinary profession, and the medicine and surgery of greyhounds.

While all of this was going on, he was invited by the University of Melbourne to provide a tutorial service to the Anatomy Department, and establish a teaching practice in greyhound medicine on the main campus at Werribee.

Word of success in these areas saw invitations from the other veterinary faculties, and he soon became guest lecturer in Greyhound Medicine and Nutrition in all four Australian university veterinary schools.

And his reputation spread overseas as visiting American lecturers became aware of these achievements, and it was not long before Dr Gannon became established as an international lecturer in the USA, UK and Ireland, both in the university circuits and international conferences – particularly with reference to the examination of the greyhound for injury, the physiology of their performance, the therapy of their disease and metabolic problems, and drug in the racing industry.

Dr Gannon also played a major role into the use of frozen semen in the greyhound industry.

“After a visit to the USA, where he saw the technology being used, he introduced it to Victoria.

“The use of frozen semen cuts out the expensive travel costs associated with breeding and reduces the travel stress on the brood matrons, which in turn can affect ovulation,” he said.

“The huge advantage of artificial insemination with frozen semen is that semen from a champion sire can be stored, almost indefinitely, until the appropriate dam is available.”

Dr Gannon remains proud that he introduced the International Greyhound Carnival at Sandown where the quality of the Australia breeding processes were demonstrated by the fact that Australian greyhounds won this international competition every one of the five years it was held.

He sees the next scientific frontier for the greyhound industry as DNA performance matching, which when combined with use of frozen semen has the potential to provide massive improvement in the quality of racing greyhounds.

After many years as a veterinary adviser to the Victorian Greyhound Racing Control Board (GRCB), he was appointed as a board member to the drug control laboratory – Racing Analytical Services Ltd – in 1988, and to the Board of Greyhound Racing Victoria (GRV) in 1997.

On June 30, 2002, aged 72, Dr Gannon retired from greyhound administration and clinical practice after receiving recognition for his past services to the greyhound industry with the awarding of the Australian Sports Medal, and the honour of Membership of the General Division of the Order Of Australia.

In November 2003, Dr Gannon, who resides in Blackburn, received an award of life membership of the Australian Veterinary Association for services to the veterinary profession.

Greetings from the Philippines. My name is Keven Harris and I am urgently in need of an email address that I can deliver a message and request to Dr. Gannon. I am not greyhond related, Rather a conformation judge for all breeds. I realize this is a strange request from your source however from here I cannot fins a way in which to contact him. I am formerly the Secretary of the Boxer Association of Victoria, a club to which Jim Gannon has been and still is PATRON. and I’m am sure he will concurr that he does know me… Read more »