Odearo has tonight been announced as one of the inaugural 36 inductees in to the Victorian Greyhound Racing Hall Of Fame.

Forty years ago greyhound racing regularly drew huge crowds to the track, with hurdling a common and spectacular element of the sport.

When it came to hurdle racing, a greyhound named Odearo stood head and shoulders above the rest. So dominant was Odearo that he is regarded as the best hurdler of all time.

“He had an enormous leap. He’d jump so low and so long that he’d out jump every dog he came up against”, trainer Arnold Porter recalled recently.

In Odearo’s era [1969-71] the masses would head to Olympic Park on Monday nights and Sandown Park on Thursday nights to catch the racing action and to try their luck with the 50+ bookmakers that lined the respective betting rings. 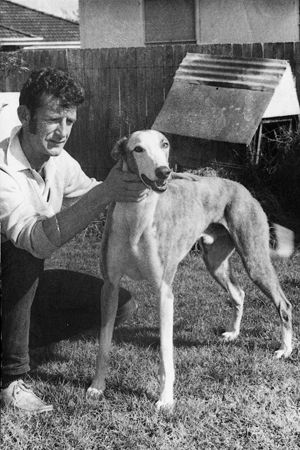 On their way into the tracks, some were fortunate enough to catch a glimpse of Odearo, who had pop star following.

“His looks were distinctive. He had a brindle and white head which he’d poke out the rear car window when we’d drive to the races and a lot of people in the streets would recognise him and ask ‘is that Odearo?’”, Porter remembered fondly.

Porter trained greyhounds from a house block in Frankston, and it didn’t take long for word to spread that a champion canine lived in the neighborhood.

“A lot of people we didn’t even know would come to our place to visit him including a lot of kids.

He was like a household pet. He roamed our backyard and was a big loveable sook”, Porter said with a grin.

On the racetrack however, it was nothing but business for Odearo, as he amassed 40 starts for 23 wins and 13 placings, finishing unplaced just four times in his career. Among his wins was an incredible 19 victories in hurdle races in the city.

“His greatest win was at Olympic Park when he won the Hurdles Championship, which was the premier hurdles race on the racing calendar”, Porter said.

Odearo was a notorious wide runner who often came from the middle of the field or worse to storm over the top of his opposition.

Handicapping was part of hurdle racing, and involved the better ranked dogs giving the others a head start. Odearo’s dominance was such that he is the only greyhound to “get back to scratch” [the original marker] at Sandown Park.

Odearo didn’t become a champion hurdler as a matter of chance. He was reared and initially educated [broken-in] by Jim Harvey, who had hurdles on the straight track of his property in Carrum.

This gave Odearo exposure to hurdles from a young age. Further to this his owner Mick Fox was insistent from the beginning that Odearo race purely as a hurdler.

“He only ever raced on the flat [in non-hurdle races] twice. That was in a heat and final at Warragul. In his heat he ran 2nd after slowing down in the catching pen, but he went on to win the final”, Porter said.

“I also remember in one of his other races at Olympic Park he fell at the last hurdle because a chap in the crowd took a photo and as a result the flash of the camera blinded him momentarily and he didn’t see the hurdle. He crashed into it and finished 3rd.”

However the victories were kind to Porter. With so many bookmakers on course, punting was huge in those days and, despite Odearo starting favourite in many of his races, Porter won his share of money on the punt.

“I won thousands on him. I had $500 the win on him in at least 10 of his starts, and that was pretty big money in those days”, Porter recalled.

While hurdles are no longer a part of greyhound racing, the memories of this aspect of the sport remain, as do those of its great champion Odearo.