It has been said that Ron Nestor’s record as a volunteer in sports administration is like Bold Trease’s four Sandown Cups – it won’t be equaled.

Between 1954-2001 Nestor held numerous administrative positions with the National Coursing Association [NCA] and he was also a Director of the Greyhound Racing Control Board [GRCB], which is now known as Greyhound Racing Victoria.

Nestor was also the judge of coursing’s premier event, the Waterloo Cup for 27 years, and he slipped and judged the open field coursing for a few years until it was ceased in 1964. He was also involved at club committee level with Geelong and as a Director of the Sandown Greyhound Racing Club.

“It was in Ron’s nature to volunteer his time, and it extended beyond greyhound racing”, Nestor’s wife, Anne recently explained.

“For instance, I was President of the local gardening club, of which Ron was never a member. 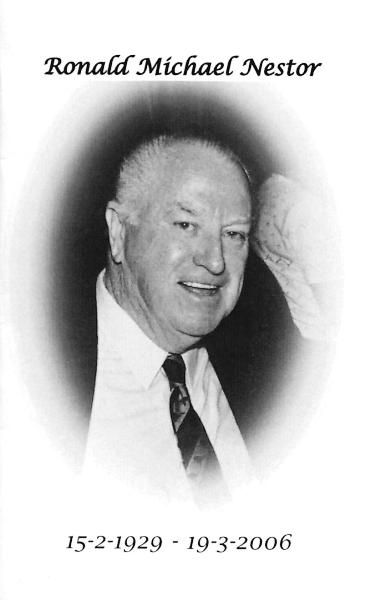 However he would attend our meetings, mow the lawns and do all sorts of errands to help us out.

Also, when our kids were younger he’d often be doing maintenance at the school.”

With a wife and five children to support, Ron did have to bring home a wage however, and he did so for many years in the police force.

“He was a policeman for 30 plus years and was a Senior Constable but he never had any ambition to go any higher than that. He did it to put food on the table but it wasn’t one of his passions”, Anne said.

Horse racing was one of Ron’s passions however, and he eventually quit the police force to work for esteemed thoroughbred trainer Colin Hayes.

“Ron and his brother Patrick started working for the Hayes stable at the same time. At first they would guard Colin’s horses at night time, and then Ron worked his way up and was handling horses during their morning track work which would involve him getting up at 3.20am each morning. He’d also handle the horses on race days and ended up working for Colin for over 20 years. In fact Ron owned a couple of horses along the way and was a part-owner in the 1972 Caulfield Cup winner How Now”, Anne said.

Another string to Ron Nestor’s bow was that he worked every September for 54 years at the Royal Melbourne Show.

“He was in charge of the events in the “Arena” at the Royal Melbourne Show, whether it was the animals, or the cars or the grand parade. Policemen weren’t paid very well in those days and the money he made from this was our Christmas money”, Anne said.

Ron’s interest in greyhound racing started when he was 14, when he took an interest in some greyhounds that were being trained by his local green grocer, Bob Kellaway.

He helped Kellaway work his dogs and soon enough Nestor was training greyhounds himself. He did so for many years, preparing winners at a lot of tracks including Sandown, Olympic Park, North Melbourne, Napier Park, Maribyrnong, White City, Geelong, Ballarat and Wonthaggi.

In fact, going to the races was something Nestor thoroughly enjoyed.

“Back when he was training dogs he’d be at the races several nights a week and right up until he died he would go to Sandown every Thursday night and The Meadows on Saturday nights. That was his leisure time. When he was with the GRCB he would attend a lot of the country cups as the GRCB representative. I don’t think he missed a Shepparton Cup, and he went to Warrnambool a lot of years and several other tracks”, Anne said.

Ron Nestor’s love for coursing was also strong. It was “always his dream” to visit Ireland’s premier coursing track Clonmel, which he did when in his late sixties. However, he had to overcome a fear of homesickness to do so.

“He ended up going to Ireland with [then Greyhound Racing Victoria’s CEO] Adam Wallish and Gavin Fitzpatrick, who was President of the NCA, to promote the first international series in Australia [in 1997]”, Anne said.

“Leading up to the trip Ron got more and more anxious because he didn’t like being away from home and I was worried he wasn’t going to go. But he did go and he thoroughly enjoyed it. It was the first time I’d known him to be away from home and be happy about it. He took to Ireland like a duck to water, partly because the people were so hospitable. In fact, he loved it so much he took me there a couple of years later”, she added.

Ron Nestor died in 2006 aged 77. His best mate was another greyhound racing legend, George Schofield, who joins Ron as a Victorian Hall of Fame inductee.

Schofield, 91, recently said of Ron…” was a great bloke and a great family man. If you wanted a drink you knew he’d be there with you. I couldn’t believe what a good mate he was and there couldn’t have possibly been a better person than Ron. There is no one more worthy to go into the Hall of Fame.”

Nestor’s devotion to greyhound racing over a long period is testimony to that.