They say a dog is a man’s best friend; this statement couldn’t be closer to the truth about Paul Stuart and the freshly named 2013 WA Greyhound Of The Year, Dyna Nalin.

It’s not just the man hugs or the conversations the pair have while in the kennels, it’s the way Dyna Nalin looks at Paul like he is the only person in the room.

Lovingly named Bobby, the big black dog certainly doesn’t lack personality; always wagging his tail like he is something special, which he most definitely is.

In an extremely successful 2013 campaign, Dyna Nalin participated in 36 races, winning on 20 occasions and placing on 11, earning over $485,000. His first big win came at just his 15th career start; when he took out the 2013 Group 1 Perth Cup from box four.

“Coming into the Perth Cup I thought he would have been a chance if he got the right run; he did outperform himself from what I had given him credit for.” Trainer Paul Stuart explained.

“He was very young and inexperienced at the time, and you couldn’t be confident with his racing style, let alone in a Group 1 with the likes of Glen Gallon.”

Dyna Nalin has made a name for himself with his come from behind racing style caused by his average early speed. Although watching his races has connections hearts in their mouths, it makes for extra exciting viewing as he rounds up his competitors with ease thanks to his strength.

Throughout the year Dyna Nalin went on to win the invite only Topgun and the Sale Cup. He also ran second in the Maturity Classic, Mandurah Cup and the Shootout.

Stuart names the Sale Cup as his favourite performance from his 2013 campaign.

“The Sale run was his biggest challenge and his best performance, just because he didn’t have the crack-a-jack form coming into the race unlike the others. He pulled something out that night that I didn’t think he would, that was probably the biggest surprise and the most memorable. He surprised me big time!”

Winning the WA Greyhound Of The Year didn’t come as too much of a surprise for Paul Stuart, although he wasn’t 100% aware of the criteria involved in taking out WA’s greatest greyhound honour. He worried about John and Brenda Crossley’s strong and speedy chaser On Coin who had all his wins on home soil.

“If it was going off just WA form there were dogs that where well performed here. He would be hard pressed coming up against On Coin because he has had all his wins over here. It was a pretty clear cut selection in the end considering he was in the top three in the Australian Greyhound Of The Year. I figured he would have to go close.”

Stuart also had champion Miata nominated for WA Greyhound Of The Year for the second year running.

“I didn’t think Miata was in with a chance at all because she only raced for three or so months.”

“He is a very good dog but she was exceptional; Miata is just in a different league.”

The start of Dyna Nalin’s 2014 Campaign has been on the side of disappointing at his home track of Cannington. Without a win at headquarters this year and an unsuccessful Perth Cup series, WA’s traveling sensation has had to play catch up with the fine form created in his absence by Zelemar Fever and Sveta Monelli.

“He doesn’t have the form like he did last year. That is a combination of a few things; he is older now and has been running in top grade. He was disappointing over 600; I didn’t rate him at all, he was pretty ordinary.”

“He isn’t showing his dash like he used to when he was younger. He wouldn’t mind having a rest, but that’s not an option at the moment with the Temlee and all that in a couple weeks’ time. After that he will be having a well-deserved break.”

The son of Ashom Bale – Tally Bale received his nomination for the Temlee last week; the final draw for the invite only race is set to be announced on Wednesday. Competing in the Australian Cup series will depend on if and how Dyna Nalin goes in the Temlee.

After what Stuart is hoping to be a successful trip to Victoria, Dyna Nalin will have a well-deserved rest to freshen him up for his next finals series, the Easter Egg.

While Dyna Nalin is on his working vacation in Victoria, he will be taking the first steps to becoming a sire.

“I just got the paper work back for his DNA and when he goes over for the Australian Cup he will be getting straws taken out of him. Wheeler wants to put him over a few bitches straight away. He could have pups on the ground while he is still racing.”

“Wheeler defiantly wants to get some pups on the ground; the prize money is higher for the longer distances, so Wheeler wants to breed dogs with a lot more strength. With the right bitch I would use him as a stud dog. The right bitch would need plenty of speed, because he will throw strength.” 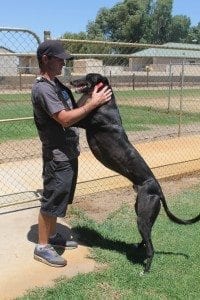 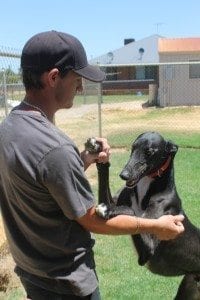 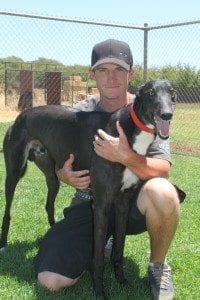 Great article about a wonderful dog.

Great article about a wonderful dog.