On the 27th of June 2015 the orange bunny is set to make it’s last trip around the Greyhounds WA Cannington that the industry has called home for over 40 years.

“The design application will be submitted next Friday which goes to be signed off by council and once that’s approved we call for tenders and basically by November earthworks will commence,” CEO David Hobbs explains.

“As of today (Thursday) we are as confident as we can be that the track itself and the kennel facilities are now non negotiable.” Operations Manager Craig Renton explained.

“The starting boxes are all now confirmed; the industry were the ones that allowed us to confirm the distances.”

In a survey that was passed around Cannington at the start of June participants were asked to choose between a number of distances marked out on the proposed track. After numerous discussions around the track between participants and industry officials, three starting points were agreed on; 520, 600 and 715 metre distances. The 715 will have a dual purpose of a possible 275 metre race and use for trials. The fourth set of boxes, the 380 metre starting point, was put forward and funded by Racing and Wagering Western Australia (RWWA), who have been wanting a city distance around 400 for a number of years.

“In the past RWWA have always been keen to have something along the lines of a 400 metre distance. The way it was being drafted it turned out to be a 380 metre start point.”

“Our original plan was the current 530, current 715 and something like the 600. We understood that is what the industry required; it was only RWWA that said they would like the fourth distance.”

“RWWA will be helping towards the funding of the extra box because we indicated to them that our budget didn’t extend to putting in four starting boxes. They have said to us that it shouldn’t be a concern and that they would contribute to the fourth box.”

The placements of each of the starting boxes are as pictured below. 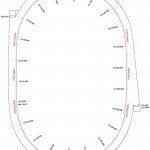 $13 million was secured to fund the new Cannington development and this money will go towards building the track as well as the state of the art kennel facilities.

“There is no further funding at the this stage for us to put towards the public side to this business, we have been unsuccessful at this particular time for more funding.”

“We have a kennel and a track which will be in place for industry participants. The public will be lacking, we don’t have a grandstand complex and we don’t have an appropriate food, beverage and betting complex, so we need further funding for that.”

The kennel facilities are marked out as below. 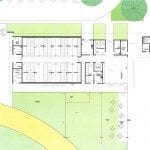 CEO David Hobbs suggests the solution to the public problem is a temporary grandstand that will be constructed overseas.

“The temporary facility I’m looking at is constructed in Dubai and is probably better than what most racetracks would have around Australia now.” David Hobbs explained.

“We will purchase this temporary facility and it will hold about 500 people upstairs seated in dining, and an additional 700 people down stairs.”

“It’s a hard wall construction and will have glass panelling. If you looked at it you would think it is a fully fledged grandstand.”

The facility will be a scaled down version of what is shown in the picture below. 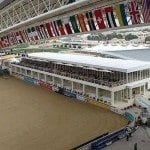 The temporary grandstand will then allow more time to find the necessary funding for a permanent fixture. Hobbs estimates it could take anywhere from a year onwards to build enough funds.

“It’s a matter of funding, our world can change in an instant because we are a statutory government body, but the Minister of Sport Terry Waldron is very much supporting us no matter what happens.”

“I think what really held us up is a few projects like the new AFL stadium in WA which is almost a billion dollar project and has left funds dry for sport.”

A worrying sidenote for Hobbs is the government’s possible decision to privatise the TAB. With the future looking so bright in regards to the new Cannington the privatisation of the TAB can only bring out more questions until a decision is made.

“We don’t know if the TAB was sold who would be the new owners? Would greyhound racing be better off or worse off? We just don’t know.”

“We are a big supporter of maintaining the status as it is now and we are unsure of what a private model would look like. If you look at the TAB’s that have been privatised over in the east coast, it hasn’t been successful.”

With the plans signed off for the new track the talk of how long the down time between switching tracks will be. During this down time, which Renton suggests will be around six weeks, the calendar will see extra meetings at Mandurah and Northam.

“There has got to be a down time because there is equipment to come from this track to service the new track. The aim is to try and keep it as short as possible.” Craig Renton explained.

“The reality is that racing will commence at the new track in late August.”

“We let the lease expire because we were well aware that we would have to sign up for our second term, another 30 years of being here, and we didn’t believe that we would be able to pay what this piece of land would be worth.”

“We are currently paying in excess of half a million dollars per annum.”

The end of June will bring an end of an era, an era that involved many modifications including the switch from grass to sand, from an underground lure to above ground, as well as distance changes. Like old Cannington, new memories can be made on new soil across the road.

Quote from Mark Claxton on greyhound data who started a topic on this subject earlier tonight.
“Cannot believe they are building a new track in the 20th century & it includes two distances that will start on corners.In an industry that makes out it is professional but is so far from it(including interference & therefore injuries)would not surprise me if Animal Liberation got hold of this&made it an issue. Are the authorities uneducated or just plain damn ignorant!Talk about asking for trouble.”

What’s wrong with the current track

Quote from Mark Claxton on greyhound data who started a topic on this subject earlier tonight.”Cannot believe they are building a new track in the 20th century & it includes two distances that will start on corners.In an industry that makes out it is professional but is so far from it(including interference & therefore injuries)would not surprise me if Animal Liberation got hold of this&made it an issue. Are the authorities uneducated or just plain damn ignorant!Talk about asking for trouble.”

What’s wrong with the current track