Two courageous Racing and Wagering Western Australian (RWWA) employees are set to tackle their life long goal – to swim the English Channel in the name of the Greyhounds As Pets (GAP) programme.

Connor McDonald and Genevieve Warriner didn’t set out initially to raise money for the GAP programme, but thought that it would be an added bonus to help the retired greyhounds as they brave the 16-degree waters.

“The English Channel is about 35 kilometres in a straight line from Dover to Calais and is often referred to as the Everest of swimming, more people have climbed Everest then have swum the English Channel.” Connor McDonald explained.

“Even though it’s about 35 kilometres we will probably end up swimming about 50 because of tides. Funnily enough the biggest challenge is the cold water, they say the fitness side most people can do.”

The duo started out competing in triathlons together two years ago with what seems now a mere 400-metre swim and they then decided that they wanted to tackle the Strait Of Dover waters.

“We joined a local club who trained channel swimmers to improve our swimming because in the triathlon’s we were good at the riding and running, but not that great in the water and we have been training ever since.” McDonald explained.

“The English Channel has been the ultimate goal because we did Rotto as a duo this year and it was sort of flat because it wasn’t our end goal – it was just a step along the way.” Genevieve Warriner explained.

The HBF Rottnest Channel Swim is 19.7 kilometres and runs from off Perth’s Cottesloe Beach to Rottnest Island.

“We train about six days a week, but the other kind of training is the best kind of training, we both have to get fat! For the last year we have both been eating a lot and not particularly good foods, just to put on a layer of insulation.” McDonald explained.

Each Saturday morning McDonald and Warriner brave the cold waters of Hillarys Marina, which is a couple of degrees colder than the ocean, and the strange looks from fellow rugged up paddlers, to help the acclimatisation process.

“In terms of doing it the same as the person who first swum the channel, you are only allowed to go across with goggles, bathers and a cap, no wetsuits!”

“Both of us are good sports people on land, so we though we would try something that isn’t suited to us. We aren’t particularly good at it, but we knew we would be going from the ground up all the way to something we think is a major accomplishment.”

Warriner jokingly revealed that she has a fear of dangling her feet in the open water.

“Every time I jump off the boat I do a little squeal just to get rid of the fear. I did a triathlon in Bunbury a few years ago, it was my first open water swim and I remember thinking I will never, ever, do that again!” Warriner laughed.

The English Channel swim can be swum from anywhere between seven and 27 hours. During that time it’s common for swimmers to encounter jellyfish, seaweed and even planks of wood.

“The time is dependent on how the tide and the weather works out, but for us it’s all about setting foot on French soil. If we can do that and we are the slowest team ever then we still did it!” McDonald said.

As self-proclaimed animal lovers, the duo’s work with RWWA has seen them encounter first hand what the GAP programme does for retired greyhounds.

“Every so often the GAP girls would bring a greyhound through for Friday casual dress day. My kids go to a local school where a couple of friends of mine have a few adopted greyhounds too.” McDonald explained.

“We didn’t jump out going we will do this swim for a charity. We just thought we are doing something big and if it gets money for the greyhound’s, then that’s great!”

On the 17th of July, McDonald and Warriner start their two-week journey to tackle the English Channel. They will meet their team members over there and wait for the call up from their skipper as to when their swim will begin.

“The skipper gives you a one week window, from which he will choose the best day to swim. So we will get there a few days early, do a bit of acclimatisation and then we will stay on the coast that week.” McDonald explained.

“We can get the call at any time, it isn’t uncommon for some of the teams to start at two in the morning because of how the tides are going.”

Their team is comprised of six eager individuals who all share the goal of finishing the English Channel swim. Jim Bivoltis is currently training in Greece and swimming to raise money for the Orygen Youth Health Centre. Di Twigg completed her first solo Rottness swim this year, Steven Wood was a late call up to swim in the English Channel and Sarina Arfuso, a former Australian water polo player, will complete the team.

Click here to donate to the Greyhounds As Pets on behalf of Conner McDonald and Genevieve Warriner. 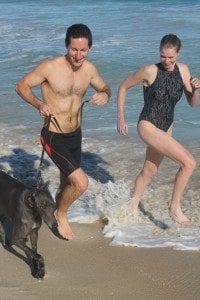 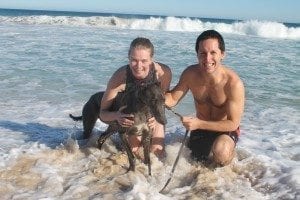 Get behind these guys. Phenomenal effort!

great story Molly Haines but Tonka doesn’t seem as keen on the cold water as the swimmers…..

Hahaha he was a bit of a sook! Thanks Steven Withers!

Get behind these guys. Phenomenal effort!

great story Molly Haines but Tonka doesn’t seem as keen on the cold water as the swimmers…..

Hahaha he was a bit of a sook! Thanks Steven Withers!