The city of Pattaya, in Thailand, is home to an increasing number of Aussie expats, and one of them is about to celebrate seven years of being domiciled in the resort. That would hardly be earth-shattering news except that this resident happens to be probably the first, and only, former racing greyhound to come from Australia to Thailand.

The greyhound is former NSW city-class chaser Good Bye Swany (Big Bad Luther x Time That). Whelped in March 2003, the red fawn dog was owned by Ron Barclay and trained by Rose Birrell. His racing career was hardly superlative, but he was better than many. In 86 races he won 11 times, was placed in another 28 races and earned $25,605 in prize money. Included among his wins were four successes at Wentworth Park.

The story of how Good Bye Swany came to Thailand begins in the early part of 2007.

Ben Abrahams, a former greyhound owner and trainer from Britain, who had come to live and work in Pattaya a few years earlier, asked this writer about the possibility of obtaining a retired Australian racing greyhound as a pet.

At the time I was still writing for DeFax Sporting Publications and I made inquiries with Nadine Wigley, the long-time manager, with the aim of putting Ben in contact with the people who operate the Greyhound Adoption Program in Australia. As it happened, Cathy Lambourne, who was working in the DeFax office at the time, was also a strapper for some prominent greyhound racing kennels. Cathy said she knew of a recently-retired racing greyhound the owners no longer wanted. That greyhound, of course, was Good Bye Swany. I simply put Ben in direct contact with Cathy, and between them all the necessary arrangements were made and the paperwork completed.

There’s no doubt the Thai authorities had no real idea what to do with the dog when he arrived on 20 June 2007. Ben had engaged the services of a shipping and customs agent and was able to smooth the wheels of officialdom with the usual ‘donation’ to the Customs Officers Annual Ball. He said, “When we went to collect him there was quite a crowd around the crate he was in. They’d never seen anything like him before, and really had no idea what he represented.”

Although horse racing is conducted in Bangkok at two courses, the nearest country conducting greyhound racing is Vietnam, with an Australian-built circuit at Vung Tau that opened in early 2000. The majority of Thais have never seen a greyhound race, and certainly wouldn’t recognise one in the flesh. No wonder ‘Swanee’, as Ben calls him, caused such a stir at the Customs point.

Dr Hugh Wirth, the Honorary President of the Royal Society for the Prevention of Cruelty to Animals (RSPCA) in Victoria, stated, “Of all the dog breeds that I have treated in veterinary practice, the greyhound is one of my favourites- gentle, cooperative, loving and a thorough couch potato! No wonder there is increasing support for the greyhound adoption program for they truly make wonderful pets.”

That is certainly the case with Good Bye Swany. The dog settled easily into his new two-storey home at an estate in eastern Pattaya without a hitch, and soon dominated the couch in the downstairs living room.

“At first he wouldn’t come upstairs and when he did he could never get back down without being carried,” said Ben. “Now he bounds up the stairs and takes over the guest bedroom.”

The house has a swimming pool, but Thailand also has cane toads, which can be dangerous to dogs, and Ben is careful to have someone watch Swanee any time he is in the back yard.

Two Presidents of the United States are known to have had greyhounds as pets: the 10th incumbent, John Tyler, had a greyhound named Le Beau, given to him by the Consul of Naples, while the 14th President, Rutherford Hayes, had a greyhound named, somewhat unfortunately, as Grim. Admittedly, John Tyler’s greyhound is more likely to have been what is known as an Italian rather than a standard coursing animal. While Ben might not be in quite such exalted company, he can at least claim the honour of probably being the first person to have ever owned a racing greyhound in Thailand.

So, for the past seven years Swanee, now a ripe old 11 years of age, has been living the life of Riley in a climate where every day is summer. 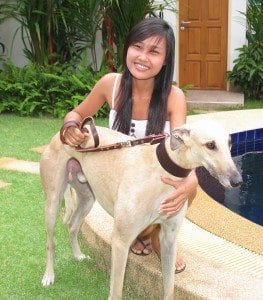 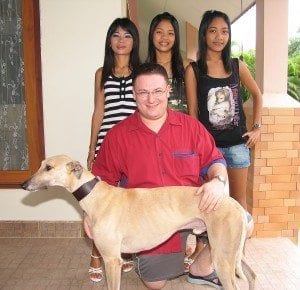 A really good story for those who follow greyhound racing. If that is a recent photo of Swanee he sure look well for his age.

A really good story for those who follow greyhound racing. If that is a recent photo of Swanee he sure look well for his age.