South Australia’s home of greyhound racing, Angle Park, will close in early April for a period of approximately four months to allow for track and infrastructure works.

The project, which will see Angle Park undergo a complete track rebuild and a minor redesign, resulting in all racing at the venue being suspended during that period.

Consultation regarding the rebuild and redesign of the track has been undertaken with key stakeholders over the past 18 months, with the Adelaide Greyhound Racing Club (AGRC) playing an elevated role in that process.

Whilst the project is primarily about the renewal of ageing infrastructure, it provides a clear opportunity to subtly redesign the track based on modern principles.

The redevelopment will result in minimal visual change, but will produce a safer track for racing by implementing established design improvements identified by recent research into this area.

“This project will ultimately deliver a world-class metropolitan track, the equal of any other in the country in terms of safety, fairness and presentation” explains GRSA Chairman, Grantley Stevens.

The most notable change on the new track will be the re-positioning of the four existing starts at Angle Park, as summarised below:

All Angle Park race meetings during the affected period will be transferred to Gawler and Murray Bridge.

GRSA also intends to undertake a number of unrelated minor projects during the Angle Park shutdown, including:

“Although we never want to see racing suspended at Angle Park, the cumulative wear on ageing infrastructure cannot be ignored. The Club looks forward to the new and improved track” said AGRC President Petar Jovanovic.

The last Angle Park meeting prior to works commencing will be conducted on the night of Thursday April 8. The first day of the new racing schedule will come into effect from Monday April 12, with racing to be conducted that night at Murray Bridge. 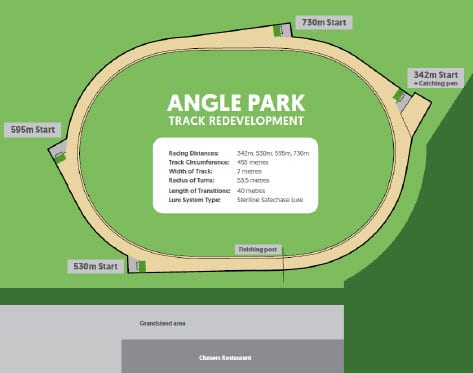