AUSTRALIA presently has 65 greyhound tracks in operation across Victoria, New South Wales, Queensland, South Australia, Western Australia, Tasmania, the Northern Territory and the Australian Capital Territory. The majority of the tracks are provincial and country, with each state also boasting a metropolitan circuit, with the exception of Victoria which has two.

The pinnacle of racing in New South Wales, nestled right in the centre of the Harbour City, with metropolitan racing on Wednesday and Saturday nights.

Armidale:
One of the most unique tracks in Australia, with part of the NON TAB grass surface being built on a bridge.

Bathurst:
Bathurst, or Kennerson Park, is run by the NSW Greyhound Breeders, Owners and Trainers Association, with racing conducted on Monday afternoons.

Broken Hill:
Based in an isolated mining community in the far north-west of NSW, the Broken Hill track provides greyhound racing in the iconic Australian outback.

One of a select few one turn tracks in the state, Bulli is located on the South Coast of NSW and holds race meetings once a week every Friday night.

Casino:
A unique circle shaped track which is located in the Northern Rivers region of NSW, holding meetings on a Friday afternoon on a newly renovated loam surface.

Coonabarabran:
One of the fundamental country tracks in NSW based on the divide between the Central West and North West Slopes regions of NSW.

The world famous Dapto Dogs – hosting meetings each and every Thursday night in the Illawara, NSW.

Dubbo:
Racing in the Orara region is held at Dubbo, where the Mitchell, Newell and Golden highways intersect.

Gosford:
Home to greyhound racing on the Central Coast of NSW, half way between Sydney and the Hunter Valley.

Goulburn:
It would be a crime not to visit the track whilst in Goulburn, with greyhound racing being run every Monday on the loam, single turn circuit.

Grafton:
Greyhound racing in the Jacarranda City is highlighted by the annual Grafton Racing Carnival each July.

Gunnedah:
The Gunnedah greyhound track has been around since the 1960s and is one of the most historical venues in NSW, as the final resting place of champion chaser and sire Chief Havoc.

Kempsey:
Another one of the pivotal country tracks based in NSW, Kempsey provides NON TAB greyhound racing for trainers around the mid north coast of the state.

Lismore:
Based in a regional township, not far from the Queensland border, the Lismore circuit hosts meetings every Tuesday evening.

Lithgow:
The current Lithgow track, which races on Saturday afternoons, has a long history of greyhound racing – dating back to the 1880s when live hare coursing was held at the site – known then as Brown’s Paddock.

The Hunter Valley’s only one turn greyhound track, with the big, sweeping turn perfect for young chasers.

Moree:
The track hosts NON TAB racing on Saturday afternoons in the large town of Moree, located along the banks of the Mehi River.

Muswellbrook:
Country track in the upper Hunter region of NSW racing on Sundays over 328, 429 and 560 metres.

Nowra:
The Shoalhaven greyhound track is home to 52 greyhound meetings each year, with 50 of those being on Monday nights and two during Saturday afternoon time slot.

Potts Park:
The Potts Park Greyhound Social Club is based in Yagoona, a suburb of Bankstown, south-west of the Sydney CBD. The track, which features a club and restaurant on the premises, races on Saturdays (usually two a month).

The Richmond Greyhound Racing Club is based in Londonderry, NSW, on the north west outskirts of Sydney.

Tamworth:
Home of the annual Country Music Festival, Tamworth is also the site of a country class greyhound track which hosts race meetings on Saturdays.

Taree:
Taree is another of the NON TAB tracks in NSW, with a grass circuit situated on Kanangra Drive.

Temora:
Located in the north-east of the Riverina area NSW, Temora is a NON TAB loam track, receiving one annual TAB meeting each year for their Cup feature.

The Gardens:
One of two tracks in the Hunter Valley, The Gardens is based in Newcastle and is a two turn loam track which races on Friday and Saturday afternoons.

Wagga:
Wagga Wagga is the states largest inland city – and what would a city be without a greyhound racing track. The Wagga circuit is a loam surface with a Bramich lure system, located at the Wagga Showgrounds.

Wauchope:
A NON TAB track based in the North West Coast region of the state racing over 384m, 457m and 722m.

Young:
The tiny township of Young, located on the South West Slopes region of NSW, is home to the country class track of the same name, with racing over 347m, 520m, 645m and 796m. 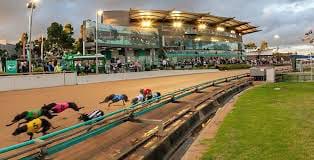 Home to nine Group 1 races each year, The Meadows is arguably the most popular track in Melbourne, based in the suburb of Broadmeadows.

One of two metropolitan tracks in Victoria, holding meetings on both Thursdays and Sundays in the outer suburbs of Maitland.

Right in the middle of the state is Bendigo, one of Victoria’s provincial tracks, with the current track being home to the sport of greyhound racing since 1978.

Ballarat:
The Ballarat track is based 105 kilometres west-north-west of the state capital, Melbourne, at Morshead Park.

Warrnambool:
The course is host to both the Warrnambool Cup and Warrnambool Classic, both of which attract the state’s best chasers to the south west coast of Victoria each year.

Shepparton:
Just under two hours from Melbourne, right in the heart of the Goulburn Valley, Shepparton races on a sand surface over three distances – 390m, 450m and 650m.

Geelong:
Greyhound racing in Geelong is conducted at Beckley Park, with a two track complex featuring a two turn course on the inside of a one turn track.

Cranbourne:
The Cranbourne greyhound track is situated on the inside of the trotting track, which is in turn inside the thoroughbred turf track, located at the Cranbourne Racing Centre, Grant St, Cranbourne.

Healesville:
The only remaining straight track in Australia that receives full TAB coverage, with races held over 300m and 350 metres- the latter being the distance for the tracks feature event, the Group 2 Healesville Cup.

Traralgon:
Traralgon opened its brand new track and facilities in 2015, providing a state of the art experience at the provincial track.

Warragul:
Based in the small country town of Warragul, situated at the Logan Park Showgrounds, the track is 100 kilometres east of Melbourne.

Sale:
One of only two provincial tracks in Australia thats hosts a Group 1 event, that being the Sale Cup over 650 metres every boxing day.

Olympic Park greyhounds was the premier Victorian greyhound racing track until closed in the mid 90’s when the MGRA moved to The Meadows.

Albion Park:
The epicentre of racing in the Sunshine State, located in Brisbane along the banks of the famous breakfast creek.

Ipswich:
Popular track in the south-east of Queensland which is home to greyhound racing on Tuesdays, Fridays and Saturdays.

Bundaberg:
A NON TAB venue operating in the south-east region of the Sunshine State which holds regular meetings most Saturdays.

Capalaba:
The only remaining straight track in Queensland, holding racing over the 366 metre distance on Saturday afternoons.

Rockhampton:
With over 300 days of Sunshine each year, the beautiful city of Rockhampton hosts TAB events on Wednesday night at Callaghan Park.

Townsville:
Tuesday racing in the north-east of Queensland is conducted at Townsville, with events held over 380m, 498m and 643m.

Gabba:
The Gabba was Queensland’s premier greyhound track until it was closed in 1993.

Cannington:
The main track in the west, Cannington is home of metropolitan racing, with the feature events each year being the Group 1 Perth Cup and Group 1 Perth Galaxy.

Northam:
Northam, constructed in 1996, hosts greyhound racing on Mondays and Thursdays, with the track located an hour east of Perth, right in the heart of the Avon Valley.

Angle Park:
City class racing in South Australia can be found at Angle Park, a north-western suburb of Adelaide around 10 kilometres from the CBD.

Gawler:
Regarded by many as the secondary track in South Australia, Gawler races over 400m, 531m and 643m, just under 50 kilometres north of the state capital.

Mount Gambier:
Situated in the second most populated city in the entire state, Mount Gambier races on alternate Friday and Sunday afternoons.

Port Augusta:
A NON TAB venue, Port Augusta is a grass track which is located at Chinnery Park which races on Saturday or Sunday afternoons.

Strathalbyn:
The greyhound track at Strathalbyn is situated at the trotting club and races over 319m, 416m, 536m and 762m.

Launceston:
Situated in the north of Tasmania, Launceston races on Monday nights, predominately over 278m, 515m and 600m.

Devonport:
The third greyhound racing track to have been established in Tasmania, having been held inside the Devonport Trotting Track since 1952.

Winellie Park (Darwin):
The one and only track in operation in the Northern Territory, with the flagship event being the Group 3 Darwin Cup over 537 metres.

Canberra:
The sole greyhound track in the ACT is located at the corners of Jerrabomberra Ave & Narrabundah Ln, Symonston, and hosts racing on most Sunday evenings throughout the year.

Why is Cannington not mentioned in WA?