In the time before it was granted a licence, on what was then known as the Number 2 Olympic Park oval, the Melbourne Greyhound Racing Association (MGRA) had been conducting its racing out of North Melbourne Oval. When the council increased the annual rental fee from £7,000 to £9,500 per year, the MGRA refused to carry on and negotiated for the Olympic Park ground. 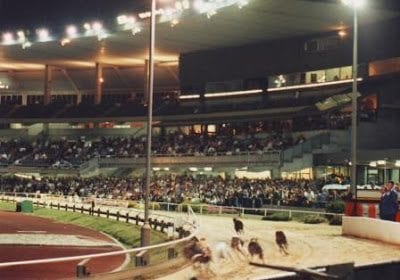 A deal was struck with the management of Olympic Park whereby the MGRA would spend around £50,000 on installing facilities and would pay either £5,000 a year in rent or 12.5 percent of gate takings, whichever figure was the higher.

Despite the deal, the Victorian Amateur Football Association, which was then paying about £350 a year for the ground, expressed disappointment as the construction of a greyhound track would reduce the dimensions below the minimum for Australian Rules football.

The track was officially opened for racing on August 20, 1962. Olympic Park would operate, mainly on a Monday night, for the next three decades.

The winner of the first race was Rebel Cub, trained by future committeeman Les Foran.

The last major race conducted at the track took place on December 23, 1996, with the Silver Chief Classic, won by Awesome Assassin. The track closed down soon after.

Racing was conducted over 560 yards and 800 yards on a sand surface. With the introduction of the metric system at the start of 1973, the distances became 511 metres and 732 metres. Racing was also held over 298 metres and a middle distance of 600 metres was introduced in the 1980s. Hurdles were run over the 560 yards/511 metres trip.

The record for the most number of successive victories at Olympic Park was set by Striding Ahead with 13 on end in 1980, all over 511 metres. This eclipsed the previous best of seven in a row, set by Temlee in 1974. Temlee raced 17 times at Olympic Park for 13 wins and one third, including a track record 29.67.

The great stayer Lizrene held the record for the most successive wins over 732 metres, winning eight on end in 1972. She also won six on end in 1973.

Pharaoh’s Mask was undefeated in seven races over 732 metres, including a track record 43.09 run set on November 24, 1986, and unbroken at the time the track closed down. Pharaoh’s Mask also won eight races over 511 metres.