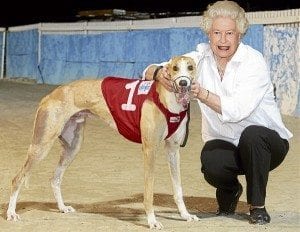 While most of our audience are Aussies and Kiwis, the team at Australian Racing Greyhound knows that there are people from all around the globe that want to have a bet on the dish lickers.

Greyhound racing is also very popular in countries such as England and Scotland and this article aims to provide you with useful information when betting on the dogs from these countries.

We want to make your betting experience as easy as possible, so we handpicked the best online bookmakers for UK punters, bringing you the bookies with the best prices and promotions for dog racing punters.

We have also simplified the main differences between UK and Australian greyhound racing so that you can place your bets while knowing the basics of how the races are run in each country.

With so many online bookies looking to take your hard-earned coin, we know it can be difficult to find a reputable choice to bet with. To simplify the whole process, we have put together a list of safe and secure online bookmakers which offer terrific odds and promotions to help get you started on your winning way.

William Hill:Another global giant on the bookmaker scene is William Hill which was founded back in 1934. Since then it has grown to be one of the most recognisable bookie brands, offering competitive odds and markets for all sports and racing codes, including, of course, greyhound racing.

William Hill and greyhound racing are closely intertwined in the UK, with the bookmaker being the major sponsor of the English Greyhound Derby, the most prestigious race on the British greyhound racing calendar.

William Hill offer markets for greyhound racing both in the UK as well as Australia and New Zealand. Their fixed odds markets are usually available early for feature races, allowing keen punters to secure the best of the early odds on offer.

Bets are always easy to place with William Hill which offer a terrific app for users of iOS and Android, with a streamlined mobile betting site available for all other punters with smartphones wishing to have a wager on the go.

Despositing and withdrawing money is always easy with William Hill which offers a range of services such as bank transfer, e-wallets, e-cheques and credit/debit cards to make sure there is a method to suit everyone.

If you want to have a bet with William Hill, they are giving readers of Australian Racing Greyhound double their initial deposit up to a selected amount to place on a greyhound race of their choice.

While the basics of the sport remain the same – greyhounds chasing a mechanical lure around an oval shaped track, there are a number of key differences to consider when betting on UK and Australian greyhound events. 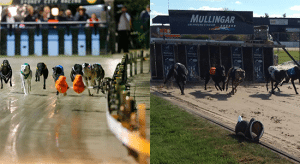 This affects the running style of many greyhounds, with UK greyhounds tending to be more spread out during their events, often resulting in less interference. In Australia, greyhounds generally come down towards the inside running rail in pursuit of the lure, normally resulting in more bumps and checks during the event.

Of course, some greyhounds don’t follow this pattern and will develop their own running styles, so it is important to check the form and take note of how each greyhound runs throughout the race before placing your bet.

In Australia, a field of less than eight runners will affect the payout for the place dividend as follows:

Trap and rug colour: Each greyhound in every event will wear a special rug with a number and colour which corresponds to the box/trap which they exit from at the start of the race.

In Australia, the colours and numbers are as follows: 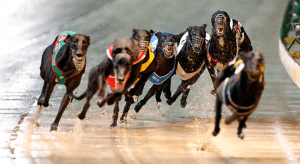 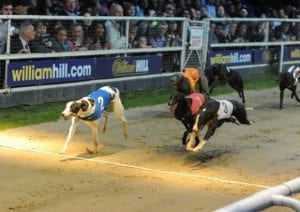 In the UK and Ireland, the colours are:

Things to consider when betting on greyhound races

No matter whether you are betting on greyhound racing in the UK, Ireland or Australia, there are some important things to consider before placing your wager.

Study the form: By studying the form you can get a guide as to the racing traits of each runner in the event such as their early speed, strength, speed and whether they are a railer or a wide runner. By being able to interpret these traits you are more likely to land a winner rather than relying solely on luck.

Watch the markets: Greyhounds generally trial in preparation for their races and just like in the thoroughbred world their times performances often get leaked to punters. So, make sure you watch for any betting moves prior to the jump.

Go with your instincts: No one is perfect at predicting the result of greyhound races and in most cases your selection will be just as good as the person standing beside you. If you like a particular runner, back it, don’t second guess yourself or be swayed by other peoples opinions.

Shop around for the best prices Don’t just take any old odds about your desired runner – shop around and find the best price because event a few cents variation in their odds can make a huge difference to your payout. To ensure you can always snare the best odds on offer, make sure you sign up multiple bookmakers and always check odds.