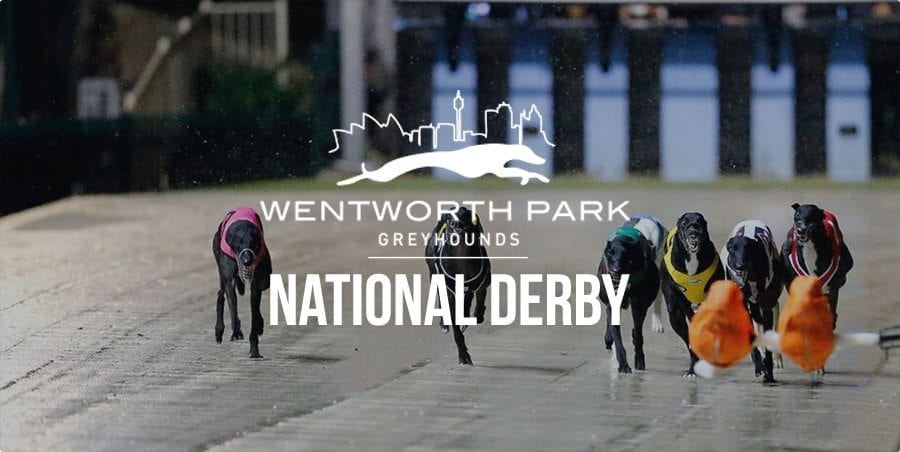 The National Derby is the most sought after age-restricted event in NSW and is held at the state’s premier track, Wentworth Park.

The Derby is open to male greyhounds only, with bitches competing in the National Futurity which is run on the same night.

The most recent edition of the race was won by Out Of Range for Victorian trainer Seona Thompson.

Betting on the National Derby

Being a group 1, there is always enormous betting interest on the National Derby as it features the best young male pups racing across Australia.

All of Australian Racing Greyhound’s recommended online bookmakers offer betting on the series, with most featuring fixed odds for both the heats and final in the lead-up.

Additionally, bookies such as Bet365 offer all-in markets, giving punters the chance to snag some value by backing the greyhound they believe can win the final prior to the heats being run and won.

This is, of course, much riskier than betting on the Derby once the final field is released, but it can also be very lucrative if you are skilful enough to snare the value.

The National Derby was first held in July 1963 and was run over 530m at Wentworth Park on the old grass track. The winner of that race was Keen Linen which collected the lucrative £1,500 prize money purse, making it the richest greyhound race in the country at the time.

The race moved to Harold Park in 1987 whilst the refurbishment of Wentworth Park took place, with ‘Wenty’ the home for the feature once more between 1988 and 2008.

In 2009, the Derby was moved to The Gardens, making it the only provincial track in the state to host group 1 racing at the time.

After six years of being run in the Hunter Valley, the feature was once again transferred back to Wentworth Park in 2015 when it was won by arguably the greatest chaser the sport has seen, Fernando Bale.

The mighty Fernando isn’t the only superstar to have taken out the Derby, with the honour roll also boasting names such as Roman Earl, Worth Doing, Fedex and Elite Blue Size.

There has only ever been one dual winner of the Derby, Steelflex who made the race his own in 1974 and 1975, scoring by a head and three-quarters of a length respectively.

Who will add their name to the honour roll in 2019? Only time will tell.