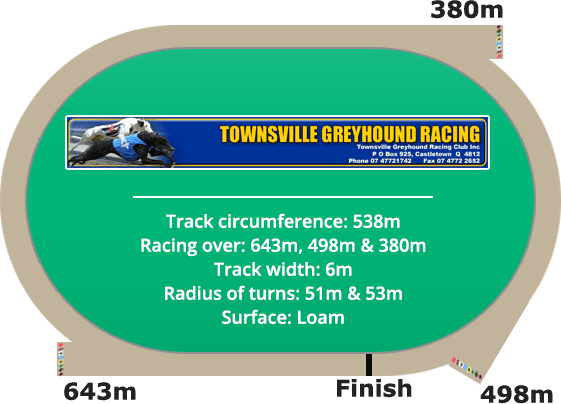 A limited number of trials are run after the last race each Tuesday night. Bookings are essential for these trials, priced at $20 per dog, with all dogs to be kennelled.

Trials are also held on Thursday nights from 6:15pm. All distances and hand slips are priced at $8 per trial, while field trials cost $6 per dog.

The first meeting of what was called the North Queensland Coursing Association took place at the Townsville Showgrounds on the afternoon of 19 December 1936. Around £79 ($158) was taken through the gate and approximately 40 greyhounds competed over 10 events. Punters went away happy as eight favourites were successful. All races were run over 220 yards. Mechanical devices were banned by Queensland government legislation, so trained live hares were used.

The major event during these years was the Townsville Hundred, which was worth £100 to the winner, a considerable sum in those days.

Racing in Townsville continued even through the darkest days of the Second World War, with many American troops stationed in and around the Townsville area gaining their first exposure to greyhound racing.

The club conducts a number of major races with its flagship event being the Townsville Cup, over 498 metres, at Group 3 level. The Townsville Cup commenced in 1981 and was run over 643 metres until 1991. It has been a sprint event since 1992.